‘SH*T IS ABOUT TO HIT THE FAN’: Ex-Secret Service Agent Warns ‘Devastating’ FISA Memo Set To ‘Expose’ Obam: All kinds of sh*t is hitting every fan in sight.  We call this a sh*t storm.  All the lies generated by liberals are rising up like the dead on Judgement Day and are now zombies roaming the internet, destroying everything.  I find this rather funny.  Movies, for example, went full SJW this last year and profits are falling and some SJW movies like the Star Wars ones are crashing and burning in China totally.  The Chinese know all about money and like money.  I remember my Chinese officials who lived with me.  One day, Sheng announced to me, ‘I love money’.  This was his revelation.  Well, football has been killed by Black Lives Matter and TV news has been killed by Hillary bots and so forth: all systems including mighty Hollywood, is being sexually dissected and demolished, all is crashing down and they all blame…Trump.  Now, the whole Mueller the Mule investigation is crashing and burning…Obama, not Trump!  HAHAHA.

I see the handiwork of the Fates here: they hate human hubris.  When humans tempt the goddesses, these snaky females get all worked up and then curse humans with ‘your wishes will come true’.  The Hillary bots, for example, demanded that anyone doing business with Russia before the election should go to prison.  Oh, that will be granted in good time!  Silly geese.

Lawmakers from Rep. Matt Gaetz (R-FL) to Rep. Lee Zeldin (R-NY) have called for the classified memo’s immediate release. According to Fox News contributor Sara Carter, the contents of the memo are so “explosive,” that it could end special counsel Robert Mueller’s Russia probe once and for all.

Former Secret Service agent Dan Bongino warned the release of the FISA report will destroy the image of his former boss Barack Obama.

“Take it to the bank, the FBI/FISA docs are devastating for the Dems. The whole image of a benevolent Barack Obama they’ve disingenuously tried to portray is about to be destroyed. The real Obama, the vengeful narcissist, is going to be exposed for all to see,” tweeted Dan Bongino.

My family was friends with Jimmy Carter in the past.  My father was one of his advisors.  He was not ‘a vengeful narcissist’.  That caused his downfall.  He is a very, very nice human.  But not a good leader.  Trump is very vengeful and is quite narcissist!  This is why all the hammering on him doesn’t stop him, it just pisses him off!

Obama strikes me as someone who has to have a crutch all the time.  He was given a golden carpet ride by the media and could barely tolerate doing that, never ever faced real opposition.  Well, the birth certificate business when it was revealed he used a CIA cooked up fake document, that rattled him a lot but the US media buried that story and the people doing the investigation were hounded by the Obama machine.

Well, that machine isn’t in power anymore and can’t terrorize people like they are accustomed to doing so now all the dirt will eventually come out.  I wish to thank my distant relative, Mr. Steele, for doing this for us.  Sure, he thought he was destroying Trump when he cooked the books but the last laugh is on him and his buddies.

The CIA is supposed to protect the President not Kennedy the President but then how many were punished for Kennedying Kennedy?  Not one, of course.  Nixon skipped around them and didn’t use them directly.  But starting with Bush Sr, the CIA has been doing dirty illegal junk nearly nonstop now.

And Trump has to clean house there and I say, shut it down, it is worthless, stupid, inept, dangerous and above all…TREASONOUS.  Why we allow this nonsense to continue is annoying but then, the CIA works for the Bilderberg gang, not the US citizens.

A source close to the matter tells Fox News that “the memo details the Intelligence Committee’s oversight work for the FBI and Justice, including the controversy over unmasking and FISA surveillance.” An educated guess by anyone who’s been paying attention for the last year leads to the obvious conclusion that the report reveals extensive abuse of power and highly illegal collusion between the Obama administration, the FBI, the DOJ and the Clinton Campaign against Donald Trump and his team during and after the 2016 presidential election.

Welcome to the Watergate Hotel Hell.  We serve heads on platters here.

So far, only a few Congress critters get to see the stuff.  Why isn’t it released to the public?  The only excuse can be this: Mueller is waiting to arrest Hillary and Obama, first?  Well?  I see no other excuse.  Arrest them both now.  The New York Times front page today is nonstop attacks on Trump.

All the interviews are of DNC clowns.  All the information is about how the DNC will win the next elections and rule us from California.  IT is all about how strong California is (HAHAHA) and how happy the people there are, the joint is run by insane liberals letting in millions of bums and illegal aliens (all the major cities are flooded with people living on the sidewalks and parks now).

The state is burning down/flooding/earthquaking/snowing/broiling hot/drought all at once and unlike anywhere else in the US, housing is being destroyed by fire/mud/shaking earth/riots/thieves/etc.  What a wonderful hell hole!  A fine example of how to live.

The funniest thing about the New York Times is their fingers in the ears method of dealing with real news.  ‘LA LA LA I can’t heeeear you!’ chant is charming in a small child but an international big news operation, it looks ridiculous.

We live in this bizarro world where half of the news appears while the other half, we have to go to Russia to find out what is really going on. During the entire Vietnam War, I had to go to the Iron Curtain countries to figure out what on earth was really going on, for example.  It was ludicrous yet at the same time, very funny except several million people had to die.

The people of Russia and China had to go to foreign sources for news, too.  The blackout of the news is done by rulers to there own slaves and if one wants to be free, one has to escape their grip.  Here is an example today of news overseas hidden here in the US, I got this via Russia, of course:

Russia and Syria warned Turkey to not do this.  Now, Turkey is doing this.  It has interesting implications yet to be seen.  No one in US media gives a damn after howling about Syria nonstop for several years.  So much for Syria news!

All the Bitcoin scam artists are fleeing to…REAL GOLD.  HAHAHA.  They even discuss in the comments how to palm off their fake money onto fools so they can convert it to real gold and then hoard that, instead.  All this time, they have been selling their tripe claiming it was better than gold!  I find this beyond funny, it is a clown car show from hell, it is so stupid, annoying and evil.  Arrest them all for fraud. 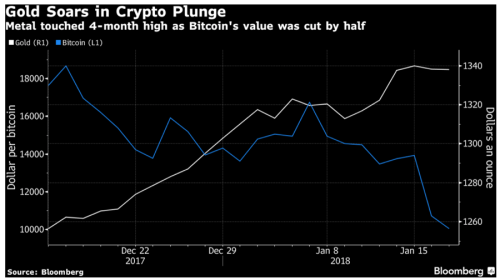