Yes, The FBI And Brit Steele And DNC And Obama’s People Conspired To Overthrow President Trump!

Watergate: The Hidden History – YouTube (yes, there was a huge bunch of bad stuff connected to Nixon back then!)

FISA memo has been released.  It is all about Fusion GPS and my distant relative, Mr. Steele in England.  It is all about how the media conspired with Holder and Obama and the Clinton campaign to push that story using FBI agents who lied to the Department of Justice in pretending this was all real and an excuse to spy on Trump and everyone around him.  The Trump ‘investigation’ is now DEAD.  Will the Special Agent investigating this finally resign in disgust?  We shall see.

This is also FOREIGN INFLUENCE on our election.  Ahem.  This is serious.  There is no ‘new’ information here, we all figured this out some time ago, this simply details and confirms what we figured out.  The conspiracy between the mainstream liberal media (New York Times/Washington Post/the big TV businesses) and the DNC and English people connected to the Bilderberg operation…yes, they conspired to stop an elected President, this conspiracy is INTERNATIONAL and very serious as I have said loudly for the last year.

The money for this conspiracy came from the DNC and the Clintons.  Send them all to prison.  Of course, arresting people over this issue isn’t happening anymore than Nixon was arrested.  This is annoying, only the little guys involved might go to prison.

I helped put a bunch of politicians under ground or in prison and it isn’t easy or pretty.  One has to find MANY crimes and tie these together to get people out of power.  Tapping phones and having smaller prey wear recording devices is how this is done, it is a dirty business but necessary.

The FBI was the criminal here, they were tagging innocent people and trying to rig things so they could have a coup and all the FBI agents involved down to the ones who did nothing but didn’t speak up, either, knowing what was going on…all should go to prison.

The reform of the FBI has to now happen.  This is Congress that must do it.  The hearings about this matter is now very pressing.  I expect many heads to roll.  This is a conspiracy to destroy an elected President!  It is high crimes!

(6) Paul Joseph Watson (@PrisonPlanet) | Twitter in England where a lot of this mess began: 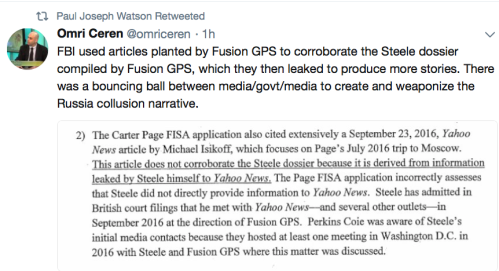 8 responses to “Yes, The FBI And Brit Steele And DNC And Obama’s People Conspired To Overthrow President Trump!”