Brussels Backs Down: Lega-M5S Government is Born in Italy!!! – YouTube

The Bilderberg gang tried to create a coup by deliberately blocking anyone from the two winning parties from entering into power and the Brussels machine even demanded a new election but soon, the clowns realized the ‘new election’ would be even more to the right than the previous ‘election’.  This is a coup that failed!  And all coups on the left are going to fail because they allowed and encouraged the Muslim invasion of Europe and the left is dying rapidly because of this insanity.

The anti-establishment 5-Star Movement and right-wing League are to swear in their Cabinet later Friday, capping a rollercoaster week of political and financial turmoil by reaching agreement with Italy’s president to drop a euroskeptic economy minister.

They aren’t stupid, the 5-Star Movement will, once in office, do exactly what they promised: kill the euro.  And stop the bleeding that is destroying Italy (as in England) and making Germany stronger.

“It’s a victory of democracy over intimidation and threats from the European Union,” said Le Pen, who shares the League’s firm anti-immigrant stance. “Nothing will stop the return of the people to the stage of history!”

Austria broke the dam when the voters sided with Hungary and Poland.  Now, Italy is joining the revolt.  This is life and death for citizens.  The open borders experiment is proving to be a terrible disaster.

“Best of luck to to both of those parties, to both of those leaders,” Nigel Farage, former leader of Britain’s UKIP party that played a key role in the Brexit campaign, said in a video message. “One thing though: Gotta stay strong, the bully boys will be after you.”

The attempts at cheating England of Brexit are now going to fail.  Farage is very happy about this.

It was a reference to European Union officials in Brussels, who have made clear in recent days their concern — in occasionally undiplomatic terms — about the euroskeptic direction of Europe’s third-largest economy.

Very little about this at the insane New York Times.   The clowns at the NYT did run a story about Bee ‘apologizing’ and Disney snarling an ‘apology’ which is stupid news since the creepy lady wasn’t fired and her shows eliminated.

Which is entirely OK with the NYT creeps being creepy people.  Back to important news which the NYT puts at the bottom of the front page:

All over Europe now, Bilderberg gangsters are on the run.  Voting citizens can increasingly see what the hell these hellions are doing.  The invasion of Europe by millions of illegal alien males most of whom hate Europe, is waking up even socialists in Europe.

Daily Mail Online has lots of amusing headlines as the ‘allies’ of the US howl like banshees: yes, these stupid people running Europe and Canada off the cliff are screaming at Trump.  They are going to raise huge tariffs on some US goods.  And this will fail because they all run trade surpluses with us and we can simply stop doing any business with them and they all go bankrupt. 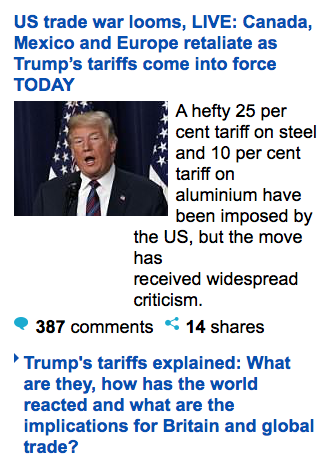 So, both Italy and now Spain are voting into office, people who are pissed about free trade and open borders.  Both these systems are an attack on workers.  Import cheap labor and cheap goods kills jobs for citizens.

Figuring this out took a while but the army marching on the Bilderberg gang’s operations is growing in size and rage!  I hate the Bilderberg gang with a passion and soon, most workers will hate them, too.  The secrecy veil has been torn in two and now we can see them much more clearly.

This is a delightful collection of headlines.  All the creeps who are Bilderberg gangsters, are screaming at Trump that he is evil by meddling in their looting of the US taxpayers.  So, England is going to protect THEIR steel?  HAHAHA.  Hello.  Duh.  Congratulations on figuring out the obvious, gangster dudes.

So, the EU robbers are inviting in the Chinese robbers.  The Chinese are saying, ‘We killed the US steel industries, now we will do this to you, too, OK?’  Nope.  They are saying, ‘Let’s stop this closed border stuff, let us into your countries and we will be united against the USA.’  I call this a deal between a wolf and a dozen crying sheep.  The watch dog has gone home in a huff and now they get to live with a real wolf instead.

China’s goal is to kill all industries in Europe.  Too stupid to figure out the obvious, but then the rulers of Europe are utterly and totally insane, they are already openly at war with the citizens who are workers, this war is going to end badly for the Bilderberg gangsters. 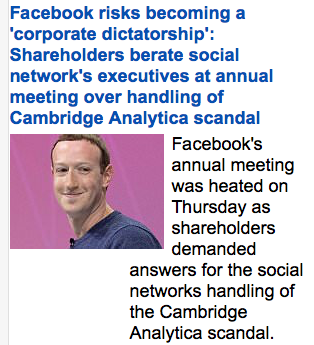 Facebook is dying.  The numbers are down.  Zuckerberg decided to attack 50% of his clients because they voted for Trump and post pro-Trump stuff.  Good riddance to bad trash.  I hope that stupid smirk is wiped off of Zuckerberg’s face.

He can write his memoire: ‘How To Lose A Billion Bucks’.  Here is a gang effort at writing a new book, ‘How To Kill The Hollywood Golden Goose’:

So, an actress making fun of another actress is unforgivable.  But actresses making fun of little girls and their young mommy using crude, sexual, rapist words is OK!!!  A line of evil actresses have stood up and said, ‘Child rape is OK, obscene sex words aimed at little girls and their mommies is OK, being foul mouthed and sexist is fine.’  I got it.

Hollywood is all about rape.  It is a very evil place.  It is Sin City.  It has zero moral values.  Do these idiots have the faintest idea what will happen next?  They are frantically virtual signalling that being obscene, threatening young mothers with rape, mocking little girls is OK.  And this, dear readers, is what Widdershins Pure Evil Black Magic is all about.

A Skull and Bones man who lived next door to my father and was part of an evil coven raped me when I was only 5 years old.  The Watchers are still interrogating him over this rape and I believe they will be happily doing this for some time into the eternal future for he is now beyond the Gates of Death and in the grip of the Furies.

Monsters like him thrive in Hollywood.  We see Europe revolting against this gang, remember the Eurotunnel in Switzerland?  The opening ceremonies were very creepy, totally black magic, and openly satanic.  This was their moment of triumph and they felt brave enough to openly advertise that the ruling elites of Europe are utterly evil and totally into black magic.  DUH. 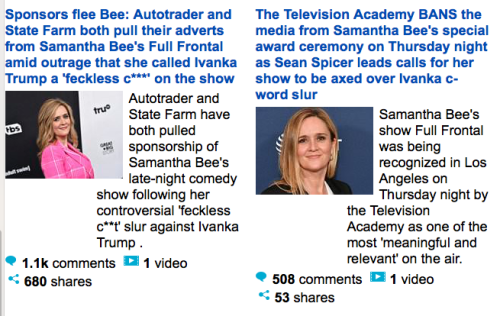 So, the Satanists giving awards to creepy anti-feminist females had to make their latest award secret?  HAHAHA.  But the advertisers are freaking out and good: they BETTER.  The desire to boycott businesses supporting rape, racism, anti-Americanism, evil…has to be throttled.

Tell advertisers, their support of evil is evil.  This will kill the last egg laying golden geese.  The Daily Mail attacks Trump every day just like the New York Times.  90% of the attacks are petty, spiteful, often anonymous stories.  All mainstream news runs anonymous stories now.  I have never seen so many non-sources stories in my long, long, very intently reading the news days of my long life.

This is insane and at the same time, backfiring badly.  I find all of this endlessly funny to watch.