The New York Times and its crew of SJW lunatics are having huge hissy fits right now.  A sort of conservative judge was picked by Trump for the Supreme Court.  The Times celebrates the collapse of Brexit as the Bilderberg gang slips a leash back onto the British workingclass.  The decimation of both the US and British workers is the SJW goal as with all communist systems.  Workers are deprived of liberty, choice and opportunity.  Then there is the capitalist Chinese: many want to move to the US and live in SJW cities here!  I will explain why since I know the Chinese rulers quite personally and intimately and am the grandmother of a Chinese boy.

There is really nothing to say about the Supreme Court I haven’t said in the past.  There are just two groups represented on our top court: Catholics and Jews.  No one else is allowed into the hallowed halls of justice.  This gets worse each choice of a new judge.  The Jews are hugely overrepresented there and the Catholics have 50% more representation than they should have.  Everyone else is locked outside.  This irritates me no end and it isn’t stopping, either.

Perhaps some day the Chinese who are neither Jewish nor Catholics will get a seat in that court.  More than a third of Chinese millionaires want to leave China and I say, this is because it is a dictatorship and they would love to live here for obvious reasons.  Of all immigrant groups, this is one our nation would benefit from if they came here.

More than a third of rich Chinese surveyed “are currently considering” emigrating to another country, according a new report.  The U.S. topped the list as the most popular destination for the fourth year in a row while the U.K. ranked second, followed by Ireland and then Canada.

Except our rulers insist on importing third world people and then putting them on welfare or importing angry Muslim males who openly say, their goal is to enslave or annihilate everyone.

Los Angeles was the top city for Chinese millionaires to buy property, followed by New York, Boston and San Francisco.

This is because these cities have had huge Chinese communnities since the 19th century.  All new immigrants tend to live where previous ones still live because they can use their home language and customs easier.  The grandchildren are the ones who venture out of these safe havens.

The U.S. topped the list as the most popular destination for the fourth year in a row while the U.K. ranked second, followed by Ireland and then Canada. The strong education system, cleaner air and better food safety made the U.S. a favorite for Chinese investors. The Trump administration’s tax plan also got high marks from respondents (HAHAHA).

LA’s air may be much cleaner than Chinese cities but it is still quite dirty.

“The American education system remains one of the main reasons Chinese investors most favor the United States,” the report said. “In addition, it came out tops in terms of visa-free travel and ease of adaptability. President Trump’s tax cuts also saw it score higher in the tax category this year.”

Our school systems are being systematically destroyed by the SJW Democrats working in tandem with black leaders who seem to hate education with a passion which is why cities with black mayors tend to have horrible schools.  But the schools serving Chinese immigrants are of high quality and the children are well behaved so they are easy to run.

Easy clue here: the parents love education and insist on it and push their children to be highly educated and they reward children who do well in school and in black communities it is the polar opposite of this.  Smart black parents move to communities that have the Chinese culture of schooling.  Home discipline is the key here.

Now on to the trade war with Europe and China: 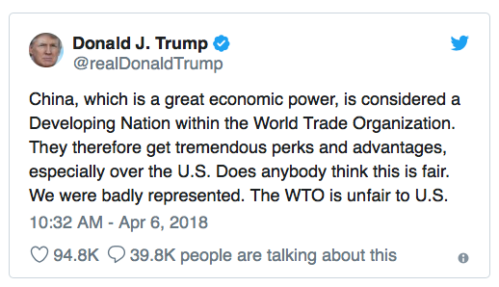 Trump is 100% correct: China is developed already and no longer qualifies as ‘developing nation’.  The Chinese would love to continue cheating in trade so they dispute this fact.  On the other hand, we run a huge trade deficit with all of Europe.  This is due to them cheating in other ways and using their Bilderberg gang members to cheat.  This is one of a million reasons I want that gang arrested or disbanded and shamed.

Here’s what it would take for Trump to back off China trade: Advisor

The U.S. would consider backing off on the China trade war once the world’s second-largest economy “begins acting like a developed nation,” a top economic advisor to President Donald Trump told CNBC on Monday.

Kevin Hassett, chairman of the Council of Economic Advisers, argued that China has “not really been adhering to the developed country rules” under the World Trade Organization “with respect to trade.”

“The end game is that China begins acting like a developed nation.” Hassett said in a “Squawk Box” interview. “[If] they lower their tariff barriers on us, they open up their markets to us; and if they do that, then I think there’s a positive outcome that we can see down the road.”

Trump has claimed China, considered a developing nation by the WTO, receives “tremendous perks and advantages, especially over the U.S.”

I voted for Trump for this reason.  It was my #1 reason to see him succeed.  He is the only President since my college years which was more than 40 years ago, to take the bull by the horns and force it down.  The Bilderberg gang media is going nuts over this especially the New York Times.

Their front page is no longer peddling the fake Russia/Trump stories cooked up by crooked politicians and foreign rulers interested in stopping Trump from changing the status quo.  Everything Trump does causes the NY Times traitors to scream in agony, openly.  I bet Trump relishes this and goes out of his way to poke at them over and over again.

They are so stupid and self-centered, they just cannot figure out what he is doing to them.  This constant poking at the NY Times and other fake liberals is highly amusing to me and I hope he never tires of this.  The Times staff should understand that nonstop freaking out is bad for their mental and physical health.  Naw, no one tell them!  I love seeing them writhing with self-inflicted pain on the ground.

Maybe new Chinese citizens who want to come to DNC cities with high crimes, diseased needles on the sidewalks and feces everywhere will demand these cesspools be cleaned up and the addicts removed and the schools have higher standards and bad students be kicked out.  Wow.  Then the cities will be fixed and very conservative.

Funny, that!  The liberals want the Chinese to move in and bring in more loot to tax little knowing that the Chinese will eventually take over and do the opposite of what liberals have created. I know for certain, they will improve all the schools their own children attend.