Free Speech For Leftists/Total Censorship Even Prison For Everyone Else 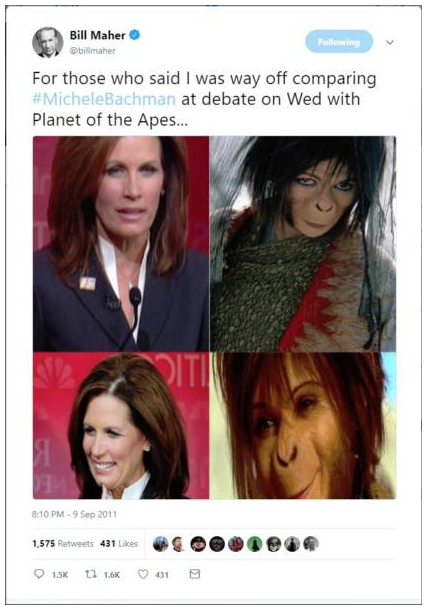 What Double Standard? Bill Maher Posts Photos Comparing GOP Politician to ‘Planet of the Apes’ Monkey – NO MEDIA OUTRAGE: he wasn’t fired.  He wasn’t called names.  Big corporations didn’t have a caniptionfit from hell.  Nothing.  Not reported, except on the right hand side of the news which the leftists are trying to crush.  The NY Times is New York Slimes, they continue to support the female from Asia demanding all white males be murdered.  The left has finally gone totally insane.  So it is no surprise to me that the #2 creature in the DNC leadership, Keith Ellison, is a wife abuser who uses force on women, too.

Austin describes seeing video of HORRIFIC abuse by Keith Ellison.
Austin Monahan describes seeing video of Keith Ellison –Screaming “f*cking bitch!” and dragging his mother off a bed by her feet!In the middle of 2017, I was using my moms computer trying to download something and I clicked on a file, I found over 100 text and twitters messages and video almost 2 min long that showed Keith Ellison dragging my mama off the bed by her feet, screaming and calling her a “fucking bitch” and telling her to get the fuck out of his house.

So, the sons have discovered the actual video of their mom being abused by the second in command of the DNC in the House.  Great!  Will all the screaming females with funky pussy hats going to rampage against this monster?  No?  HAHAHA.  Typical, they are partisan, not for anyone’s rights.

Right now, Pelosi is the star of GOP attack ads, worrying Democrats upbeat about midterms – The Washington Post reports.  All the comments on that lousy Bezos newspaper scream that Pelosi is smart, good and all the Republicans are sexists because they attack WOMEN.

All over the place, DNC clowns and ANTIFA leftists attack GOP women.  They attack them in restaraunts, in stores, at schools and even at home.  The entire DNC Congress supports attacking and disrespecting GOP women.  They are very racist as well as sexist when attacking and nothing is too vile, even spitting on and throwing trash at women who are GOP or Trump supporters.

The entire gang at the Washington Post is freaking out that anyone will defy Pelosi even when over 50 Democrats want to get rid of her.  Now, her good buddy who is always standing next to or behind her, GLOWERING with a nasty face…he should be forced out of office due to being a wife beater which the DNC says, is pure evil.  Right?  HAHAHA.

Now onto news about a really brave Scotsman: Count Dankula.  Remember him?  He taught his pug to do Nazi salutes on You Tube.  They will put him in prison, like Tommy Robinson.  Robinson has stood up for this young man who used to be a liberal.

This very brave Scotsman is intending to stand his ground, fighting for free speech.  In Europe, what you say or publish or post on You Tube can put you in prison or be punished for ‘thought crimes’.  This is pure bravery of this man to stand up to the Crown, he is definitely going the rough road of Braveheart.
Braveheart Freedom Speech (HD) – YouTube

We raised money for Count Dankula for his fines but he disputes paying any fines at all in the name of free speech which doesn’t exist in England or any part of Europe.  He is now an official hero, bravo to him.

This is the liberal proposal which will doom most ‘specialty schools’ to chaos and failure: one school that gained 150 offers to go to special high schools will be forced down to getting only 19 offers while schools that get a half dozen offers will get at least 45 offers even though the students are doing rather poorly.

These schools have a vital mission, to challenge the city’s sharpest young minds. But they are failing in that endeavor, because they all but shut out black and Latino students, leaving untold numbers of New York’s brightest children behind.

Black and Latino students make up nearly two-thirds of the city’s 1.1 million school children. Yet, of the 5,067 offers of admission to specialized schools this year, 51.7 percent went to Asian students and 26.5 percent to white students. Latino and black students received 6.3 and 4.1 percent of the offers, respectively. At Stuyvesant, the most sought-after of the schools, just 10 of the 902 students offered admission were black.

A single, three-hour test known as the Specialized High Schools Admissions Test is the sole screen for admission to the eight schools. This system arose from efforts to integrate these schools back in 1971. Opponents of those efforts lobbied for a state law, known as Hecht-Calandra, that requires the three largest schools — Stuyvesant, Bronx Science and Brooklyn Tech — to use only the exam. Over the past four decades, the exclusionary process spread as the five smaller specialized schools also adopted the exam as the sole admissions criterion.

Both of my deceased father-in-laws went to Brooklyn Tech during the Great Depression.

For the plan to succeed, the city will surely need to increase remedial and enrichment programs at the specialized high schools, to serve students who were at the top of their classes but whose middle schools may not have prepared them for the rigor of a Stuyvesant.

I took tests trying out for college admission way back in 1966 and got to take graduate courses by age 17 years.  Finding super bright students is easy: test us like crazy, we love being tested!

In the name of ‘diversity’ they are going to destroy these historic ‘high tech/high learning’ schools which had severe tests to enter, taking in the top 1% of the students.  Instead, half, yes…HALF of the students will have to be ones that do much poorer on tests.

The proposal is, these kids in the wrong schools will get tutoring (I used to tutor students when still in high school!) so they can ‘catch up’ to the smarter, harder working students.  Soon, the schools will be forced to lower standards as students fail courses and never catch up with the ones who have higher IQ and more motivation.

The schools will then pass everyone no matter how badly they do and thus, become a joke but then, the universities are doing this, too.  Good lord, this is a disaster. Half-Chinese children like my own grandson, will be heavily penalized at all these schools unless we stop this quota system.  The harder a group works, the more they are punished!

Making 50% of these high schools dumber will dumb down everything.  The pretense is, they will ‘catch up’ only this won’t happen.  We know why! The Chinese kids aren’t mere geniuses, the work very hard.  This is a characteristic of their culture.  Kids who win slots due to skin color get freebies which means, they learn to not bother with working very, very hard and thus, will drag down the entire system due to being dumbed down.