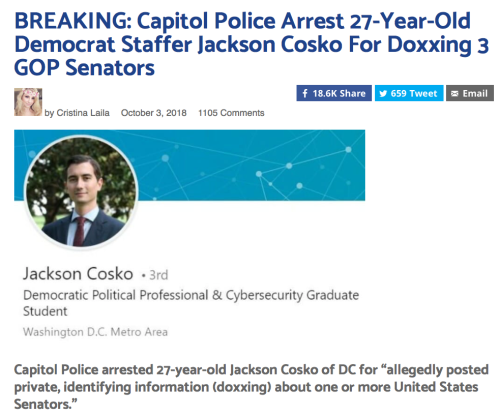 A youngish man working for the DNC Senators has been arrested by the FBI for doxxing top GOP leaders by releasing their private information so that crazy leftist violent female protestors and ANTIFA could attack them at home.  Senator Jackson Lee should resign in disgrace.  She is a black politician from Texas.  NO surprise that she thinks her staff is above the law and can do as they please.  The terror campaign run by the DNC bosses is blowing up in their faces.  One black politician in DC from California has been openly calling for blacks and leftists to physically attack anyone who works for the GOP or are the GOP even at home, even to the point of harming their families, too.

She is still in Congress and pretends she was only joking.

As usual, I tried to find information about the criminal who worked for the DNC top bosses and found this: Jackson Cosko,

So, he was working on ‘cybersecurity’?  HAHAHA.  And I suspect he is behind some of the strange leaks and other actions using computers run by Senators!  I think he may well be scared enough due to the huge number of charges against him to squeal on his leaders who are all Senators or DNC operatives.

Remember the torrent of leaks ever since Trump won the election?  All of these are being investigated and soon we will see, as they catch one after the other, who was doing what and when.  Unlike the DNC clowns, this requires skill, honesty and assembling lots of details and putting the puzzles together.

I warned everyone some time ago that these things move rather slowly due to the need to get to the bottom of things.  I know from personal experience, when I was linked up to the Federal Special Prosecutor in Brooklyn many years ago, Rudi Giuliani, and then he put a tap on my phone, the end result and sudden arrests all happened very fast after nearly two years of investigation and study of all the incoming data.

The arrests were many and all at once, not one at a time, all at once so they couldn’t warn each other.  The one hour difference for the arrest of the President of Queens, Mannings, was a slight delay so he had time to commit suicide.

The Feds much prefer to make a clean arrest and get more information this way.

The DNC in Congress has chosen to commit crimes instead of obeying laws which Congress itself, created.  Shame on them all.  I want all the players in this dirty political scheme to be removed from Congress and punished, this is the only way to clean house.

The women who were screaming at Senator Jeff Flake in the elevator are Soros-funded astroturfed activists.

There names are Maria Gallagher and Ana Maria Archila.

They celebrated after Flake caved!
And they have raised over $30,000 on CrowdPac for their elevator antics.

I hope these illegal aliens are arrested and deported immediately.  This is super obnoxious.  I was deported from Germany when age 17 due to my political meddling there!  Why can’t these crazy aliens be also removed?  The mainstream Bilderberg media isn’t reporting this news but then they refuse to report 90% of the real news in the first place.  Disgusting.