Two police officers, one black, one white, were tortured and murdered by a Black Panther communist radical in New York City way back in 1971.  I knew…I really did know the Weatherman leftist terrorists.  They were truly crazy in horrible ways, they got mad when Nixon won the first election and declared war on him.  The Panthers and Weathermen went nuts and declared a terror war on all of us.  This is happening again following the exact same pattern including the ‘going insane when the voters then choose a Republican President.’

Governor Cuomo of NY gave a killer of two cops who tortured them first, parole and then forgave him and is letting him now vote, too!  I remember when the death penalty was stopped. ‘It will be for life, don’t worry,’ we were told. Then…they fool around with the ‘life’ sentence, making it much less.

Bell is one of 24,086 freed felons now on supervised parole whom Cuomo has blessed this way in the name of “improving” their “civic engagement.”

Hooray!  We get more and more crimimals in the streets thanks to Obama and his gang!  I remember very well when criminals ruled NY City.  I made many, many citizen arrests.  Well, we are sliding back into that wonderful cycle with crime, riots, messes, drugs and all sorts of mayhem.

But consider us more than a tad suspicious — given that Cuomo made the announcement on the eve of the state Democratic convention that on Wednesday renominated him for a third term.

He is running for another session in wrecking our state.  He has NY City and other hell holes voting for him.

Bell’s despicable crimes are all too familiar by now: He ruthlessly slaughtered two New York City cops — Joseph Piagentini and Waverly Jones — in cold blood back in 1971 after luring them to a housing project with a fake domestic-violence report.

This was not accidental, it was deliberate and planned out and one cop was white and one was black!   It was horrible.  So of course, Cuomo thinks it is no big deal.  Who cares about killing cops?

After long claiming to be a political prisoner and refusing to apologize for his crimes, Bell abruptly changed course once Parole Board rules were amended to make the likelihood of recidivism the most important factor. “I have so changed,” he told the board. “You would want me to be your neighbor . . . You would want to call me up and take me to the park.”

And with that, Cuomo’s appointees — one of whom said it was a “privilege to sit before you today” — turned him loose.

After this murder, I came to NY City.  Within two years, I was running my own patrols in our neighborhood due to there being zero police presence.  Why?’

They were very pissed off about the DNC governments coddling criminals.  Then we had the blackout and my neighbors burned and looted our ENTIRE community.  So we declared war on them all.  We won.

We won over the cops, too, starting when one was assassinated in front of me and we ran him down in downtown Brooklyn.  The police ended up supporting me greatly and working actively to stop crime and listened to me and protected me.

Well, out of my own old neighborhood in Park Slope, the new mayor of NYC hates everything I did and hates the cops and doesn’t care if they are killed.  The governor of NY State is the son of Mario Cuomo, a governor in the past who worked WITH me every time and his son is a fool and idiot and out to wreck my state with his stupid pandering to destructive, evil criminal class people.

Michael Savage calls for arrest of ANTIFA terrorists who are now saying they will imitate the radical Red Communist terrorists of the 1960’s.  We are doing time travel now.  Every stupid mistake of the 1960’s is being done totally identically, today.

Now, in Portland, Oregon, ANTIFA runs riot at will and the cops stand down because the DNC mayor and DNC governor think chaos and brutality in the streets is good!  A citizen’s truck was set on fire by ANTIFA thugs because he had Trump stickers on his bumpers. 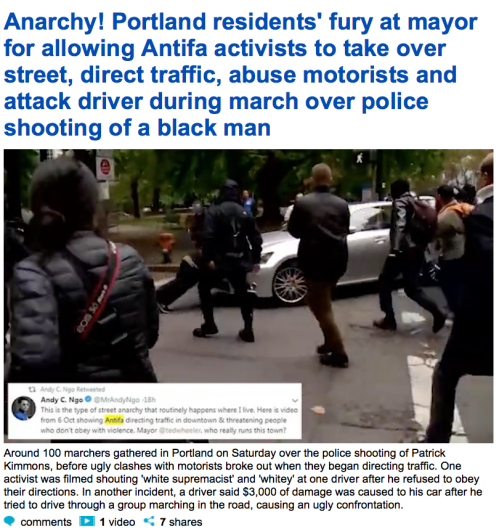 They voted for this.  I have a suggestion: vote GOP!  Problems will vanish like magic.  Or they can continue to be stupid.  I feel not the slightest pity about this.  Fools do stupid stuff and the sting of reality is the only thing that stops this level of stupidity.

Flaherty tracks crime at his site on Minds.com: 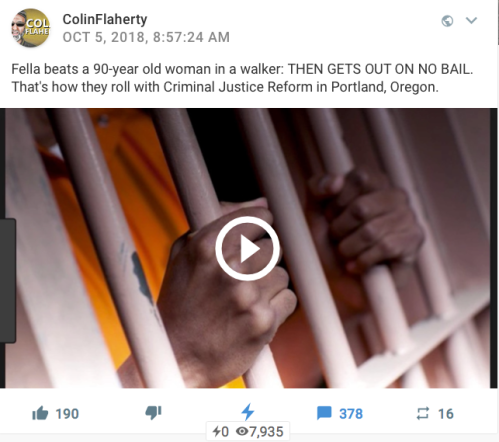 This horror is at a DNC-run city.  Letting nasty creeps out of jail with no bail so they can run riot is how the DNC runs all its cities.  They think citizens love this.  Bad, violent schools, crummy cops, dirty streets, vile places to live…and these clowns claim they are ‘conservationists’ who want desperately to ‘save the earth’ when they are more like rabid elephants destroying everything in their paths.

Rand Paul now sleeps with his guns and I don’t blame him.  And Ford is laying off workers…in Mexico and other places.  This is a good thing.  They have to bring jobs home and hate this, profits go down but workers go up…here…which makes our nation stronger!  But the Real Rulers and the Rich hate this idea.  They want us all enslaved, not stronger and happier.