A new complaint says the Texas Democrat party asked non-citizens to register vote and even went as far as sending them applications with the citizenship box pre-checked.

The DNC candidate in Texas for the Senate is crashing and burning due to him being too clever and deliberately hiding his intentions but now that the entire leadership of the DNC announced they are 100% for totally open borders and a flood of ‘immigrants’ (many of whom are incredibly fat) are invading from Central America and the DNC is trying to register illegal aliens to vote, etc.  This is key to the DNC plans to win elections: cheating.

This moral collapse of the DNC infects all the pro-DNC media systems which join in either lying about or openly cheering illegal and illicit and worse, even very violent activities if this means they gain political power.  I will examine Beto O’Rourke’s position about schools.

For the last 50 years, we have had endless chaos and catastrophic ‘integration’ of schools that destroyed many cities and sent huge populations fleeing to the suburbs to avoid DNC-run schools that are wretched places, I fled, too.  I gave up trying to fix schools way back in the 1980’s and no one has really fixed anything.

Black populations are now so out of whack, sending children to schools with too many black children is suicidal, it is horrible to the point that black parents try to get their children out, too.  The DNC solution to this problem they caused is to import millions of illegal alien students who do very poorly, too, and throw them into the black schools leading to race battles in quite a few cities.

"School choice” isn’t really about choice — it’s a ploy to funnel funds reserved for public education into private schools. Everyone deserves a fair chance at quality education. Add your name if you're with Beto.

This Twitter ad by Beto is hilarious.  He is running on ‘save the schools, integrate all the children who are aliens who don’t speak English.’  Meanwhile, his own children…guess where they go to school! 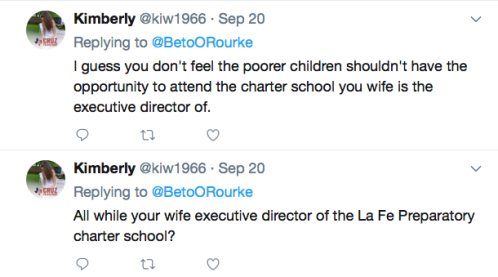 So, voters noted on his own Twitter account that he is a faker, he has his own children in a private school and even funnier, this school is run by….HIS WIFE.  Here is the semi-private school operated by the Congressman’s wife: 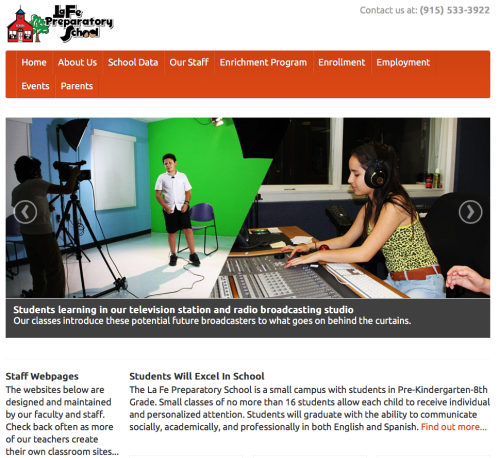 What a nifty school!  And everyone learns Spanish.  But it isn’t filled with aliens who won’t learn English.  It has low danger/crime.  I grew up on the border of Mexico and my high school had the HIGHEST MURDER RATE of any high school back in 1966 . HAHAHA.  I left early by 1967.

Sanders has been highly visible on the campaign trail and is often photographed with O’Rourke at events. Today, Sanders works in education as the director of education development for La Fe Community Development Corporation and executive director of La Fe Preparatory school, which she co-founded. She has previously served as president of Stanton Street, a company that builds websites that O’Rourke founded in El Paso in 1999. O’Rourke said his wife was reluctant when he first considered running for Congress, but after Trump was elected, she nudged him to run for Senate.

Sanders went to Williams College, then spent a year teaching in Guatemala before returning to her hometown. She’s a member of one of El Paso’s most influential families: Her father, William Sanders, is a businessman turned real-estate mogul who is profiled in the book “The Richest Man in Town.” He founded Security Capital, one of the most successful real estate investment trust businesses in the country, which he recently sold to GE for more than $2 billion.

Her daddy is super rich.  He is funding all this.  They are obviously top level elites which is very common in the DNC.  Nearly all DNC big shots are very, very rich.  They love peasants who toil for them or do the dirty work.  They hate citizens who have political power.