The Paris Agreement isn’t working out so well for Paris. Protests and riots all over France. People do not want to pay large sums of money, much to third world countries (that are questionably run), in order to maybe protect the environment. Chanting “We Want Trump!” Love France.

I watched the return of the Yellow Vest marchers in Paris.  Yes, I heard them repeatedly chant ‘We want TRUMP’ in French.  Also, ‘Macron resign’ was chanted frequently.  The police moved in and attacked the marchers yet again but I noticed the bravado was gone, they were just doing their job, more or less.  The French are revolting against ALL Bilderberg gang programs: replacing workers with foreign illegal aliens, global warming scams and anti-nationalism designed to turn world into a global Imperial Order operation like in Star Wars.

All these emperors want to use black stormtroopers a la Darth Vader to menace and control or kill citizens of countries disputing power with these globalist creeps.    We can see this in France now, quite openly.  Yesterday’s protest started, as usual with all the protests, the workers were quiet, pleasant and happy.

Then the black stormtroopers moved in and began to attack utterly peaceful protestors.  I watched the entire thing unfold over several hours via the Russian news services which are very much superior to EU and US news producers.  The Russians show the naked truth, no commentary, even, just the videos.

Here is the Arc de Triomphe in a fog of tear gas as the troopers attacked the peaceful citizens.  Repeatedly, vast amounts of tear gas was poured upon the citizens.  They refused to leave.

Santa Claus showed up and asked the troopers to stop attacking citizens but it was useless because many of the troopers don’t believe in Santa Claus.  Eventually, after nightfall, the troopers drove off the citizens as they did every weekend for the last five weeks.

Macron is even less popular now!  He doesn’t care, he is a dictator.  Calls for Macron to resign were alternated by protestors with chants supporting Trump.  I heard the chants!  This is not make believe news though our Real Rulers will scream that no one in Paris chanted for Trump to take over France.  But they did do this!

Now on to the DNC destruction of the USA: the Democrats want open borders, free trade and the destruction of cities so they can become DNC power sources after replacing workers with aliens who hate the US.

Desperate school children from Austintown Intermediate School write to GM to save their parents jobs:

Schoolchildren near Lordstown, Ohio, are sending “thousands” of letters and drawings to General Motors CEO Mary Barra stating their Christmas wish is for her to keep the GM factory there operating.

The handwritten missives from 20 school districts in the Mahoning Valley area were expected to be mailed to GM on Friday.

Many plead with Barra to give Lordstown a new vehicle to build so it can remain operating and save the 1,600 jobs there.

Mary Barra was in charge of ‘global human resources’ with GM before becoming the Big Boss.  It is obvious that the American worker ‘resource’ is of little use to GM who want cheap foreign labor.

This school is interesting.  Here is a photo of their Jazz band, for example.  They have a huge, huge full band, too.  They play very good for Jr. High students. I am amazed at their training and ability. 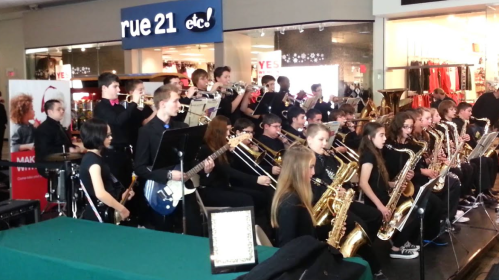 The school is well run, the students are happy and of course, liberals want to destroy it.

The arrogance of invaders is so obvious.  They feel free to order citizens around, to abuse us and to mock us.  The ‘melting pot’ concept of yore is dead to the DNC.  They want race/religion/sex conflicts with people hating America and all it stands for while screaming that we have to respect all of them while they disrespect all of us in return.

This is going to ultimately lead to real conflict settled by guns.  We have seen many a country like Yugoslavia burn to the ground thanks to religious/racial conflicts settled via fighting.

The most urgent problem for the American education system has a Latino face. Latinos are the largest and most rapidly growing ethnic minority in the country, but, academically, they are lagging dangerously far behind their non-Hispanic peers. For example, upon entering kindergarten 42% of Latino children are found in the lowest quartile of performance on reading readiness compared to just 18% of White children.2 By 4th grade, 16% of Latino students are proficient in reading according to the 2005 NAEP, compared to 41% of White students.3 A similar pattern is notable at the 8th grade, where only 15% of Latinos are proficient in reading compared to 39% of Whites.4

With respect to college completion, only 11% of Latinos 25 to 29 years of age had a BA or higher compared to 34% of Whites. Perhaps most distressing, however, is the fact that no progress has been made in the percentage of Latinos gaining college degrees over a 20-year period, while other groups have seen significant increases in degree completion.

After illegally entering the US, the Hispanics are collapsing rapidly into the doldrums where black communities dwell.  Hooking into DNC run welfare systems, the population exists in order to destroy, not build.  Bars on windows and doors appear as people desperately try to stop criminal attackers as looters, rapists and murderers run riot.

The DNC loves these riots!  They think, this will bring them power while all DNC leaders live in various sheltered enclaves protected by armed troops.  Eventually, the mobs created for political purposes will raid and destroy and kill the DNC leaders, too.

Anyone talking about Muslim intolerance and terrorism is banned from Twitter but Muslims attacking Christians and our own government are OK:  this Muslim politician won in a DNC district after defeating a JEWISH Democrat.  Lunatics like the very Jewish Chuck Schumer better wake up and smell the scheiss.

Making fun of Christians is OK with Jewish leaders too.  But they should be somewhat aware that Muslim leaders want Israel destroyed and the Jews there, killed.  Unable to resist having a temporary alliance to enable Muslim invasion of Christian countries, the Jews are playing with fire here, big time.

An illegal alien very small child was dragged across the border where the poor mite died despite US medical care. Here is how the DNC reacted to this event:

On Friday’s The Last Word show, MSNBC host Lawrence O’Donnell gave California Democratic Rep. Norma Torres an unchallenged forum to claim that the Trump administration has “murdered” illegal immigrant children as the two discussed the recent death of a seven-year-old girl after she was transported across the desert illegally by her father.

Looks like the Jupiter leader of France is now the Pluto of France.