DNC/RNC Treason In Congress: No Money For Wall So VET Raises $1.4 Million in ONE DAY For Wall

Yes, we can do it!  The Congress, as I often point out, is owned via naked bribery, by the Bilderberg gang.  They want open borders!  Big time.  That and to tax us all on a fake ‘global warming’ scare (hard to pull off now that it is much colder) is their looting methodology they cooked up two decades ago.  Since voters do not control Washington, DC, we have to endure endless treasons for the time being.

Here is his home page:

Brian Kolfage endured a life-changing event that would have sent someone of lesser spirit into a downward spiral. But for this former SF Airman turned Architect life is about looking forward to what you can do, not what you cannot.

This is who we call ‘a very brave man’ who has something else: courage to endure.

Then Senior Airman Kolfage was on his second deployment for Operation Iraqi Freedom in 2004. On September 11, 2004 after working a night shift at Balad Air Base, Iraq, he awoke in the afternoon, left his tent to get some water and walked no more than 25 feet when the airbase came under a rocket attack. It would be the last time he would walk on the legs he was born with. A 107mm rocket shell exploded about three feet from Airman Kolfage. He was thrown several feet in the air and landed against a wall of sandbags, still conscious, and began calling for help.

He was sent into that Bilderberg-created hell hole called ‘Iraq.’  Everything that has happened in Iraq since Bush Jr. invaded are war crimes…not the soldiers, the leaders who sent them there to die!

Airman Kolfage’s best friend was thrown from his bed during the attack. He heard the screams and rushed outside to find his friend bloody, mangled, and clinging to life. The Airman and a medic rushed to help Airman Kolfage, who was struggling to breathe with only one lung after the other had collapsed. Brian’s friend desperately tried to divert his attention from the seriousness of his injuries, but calmly, Airman Kolfage assured him that he already knew the extent of his wounds, and that he just wanted to go home to his family.

Many a soldier and civilian in that war crime suffered hideously.  It was a historical disaster which the US still is stuck in this ‘tar baby’ invasion which bin Laden himself gloated that ‘It’s a trap’ as that Star Wars alien always would say.

Despite suffering multiple amputations and the looming possibility of death, Airman Kolfage still maintained incredible strength and courage throughout his recovery. The fact that no one with his level of amputation has ever been able to walk independently didn’t discourage him. With undiminished spirit, he still saw opportunities and worked with feverish determination through his physical therapy program, gaining strength and balance every day.

And now this brave, good man is taking on a real monster: the Bilderberg gang.

Incredibly, Brian walked out of Walter Reed only 11 months after being injured; this is unheard of. Till this day he is still the most severely wounded Airman to survive any war. After leaving the hospital he immediately continued his service to the Air Force, and was assigned to Davis Monthan AFB 355 SFS as the base security manager. Brian furthered his service to the community by proudly accepting to be on Congresswoman Gabrielle Gifford’s Veterans Advisory Committee. He provided crucial inside information to help the congresswoman make vital decisions which helped veterans nationally. He was invited by the Congresswoman to be her special guest at the 2012 Presidential State of The Union Address when she resigned. Brian continues to work for his local congressman on the veterans advisory committee.

Brian is a now 2014 graduate from the University of Arizona’s School of Architecture, where he rose among the ranks to the top of his class. He never let the daunting tasks of learning to draw without his dominant right hand affect his ability to perform. With persistence and determination he has beat the odds that were stacked against him and recently was awarded one of the most prestigious military scholarship’s, the Pat Tillman Scholar award. Brian continues to embrace a positive attitude as he makes great strides, both literally and figuratively, in learning how to walk with his prosthetics.

Thankfully, architects can use computers to design buildings.  The pain that this man went through is unimaginable.  I had a teacher in Germany who lost both hands during WWII fighting in the Eastern Front and he still was able to teach but the girl students were scared of him due to this.

Brian and his wife continue to make trips back to Walter Reed Army Medical Center to visit with newly wounded vets, his insight and ability to connect with the veterans gives them new hope for their future. In 2014 Brian was bestowed the most honorable award that a wounded warrior can receive, the George C. Lang Award for Courage, not only for his fearlessness, but his selflessness actions of taking care of other wounded veterans who were in need of mentoring

What is most infuriating is, this should never have happened in the first place.  Unrepentant, the Bilderberg gang continues to destroy humans here and abroad in their desire for Total Power over all humans.  Nothing pleases them more than to fly all over the planet earth, consuming oceans of fuels, while forcing us to freeze to death so that tropical hot spots will be slightly cooler. 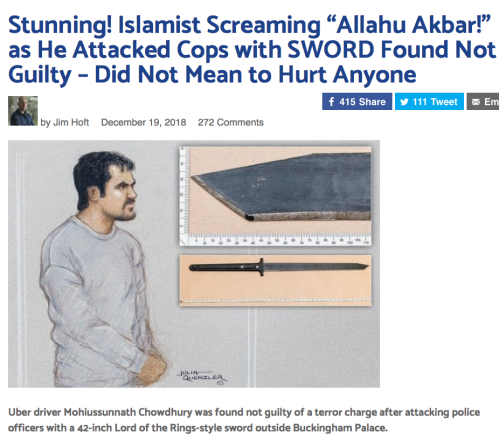 Another release of terrorists inside the EU: this is common.  They let these invaders run loose until they succeed in killing many citizens while screaming exactly these words!  Duh!  Every time a terrorist succeeds after being arrested many times and ‘under observation’ the people being attacked wonder why this is happening over and over again.

This is malicious and deliberate.  DUH.  They want us all terrorized.  The DNC is ecstatic with joy that they can continue to flood the US with terrorists because Congress decided ZERO dollars for any walls to stop invaders.

I campaigned for better policing, formed alliances with the police, with the Federal Special Prosecutor in Brooklyn and had many a loud battle with the mayor and the city council over the issue of crime and WON.  NYC crime collapsed as the police enforced laws.

DUH.  Now, a former neighbor of mine is undoing everything and crime is shooting upwards and the DNC is winning elections in NY State thanks to letting illegal aliens vote for more crime and we get…more crime.  Yup.  Imagine that.

The GOP has to continue flushing out all the Bilderberg gangsters from its own ranks.  The People are incredibly angry now, they know Trump didn’t betray them, the mainstream media and the Big Bosses betrayed them.

This uprising is starting, not stopping.  Just like in Europe after enabling many millions of hostile aliens to invade, now the People are marching and demanding the rulers be removed even executed for treason.

This force is huge and the stupid people running things think, if they tank the economy and make people poorer and angrier, they would vote for more alien invaders, more taxes on energy….ahem.

There is this very, very ancient curse: may your wishes come true.  I have warned humans about this curse.  The sleeping giant of middle class workers being chased from pillar to post by liberals is going to end violently.  People thought, when liberals rammed ‘school integration’ down everyone’s throats, all they had to do was flee DNC-run cities like Detroit.

Now, the DNC wants to destroy the suburbs.  There is no where left to run, one has to stand and fight.  In NYC, the leftist mayor just killed off the ‘specialty schools’ which test students before they enter.  Since mostly Asian and ‘white’ European stock children have high IQs, they go to safe schools.

So the mayor decreed that at least 50% of the students have to be black or Hispanic which means the schools will be utterly destroyed.  And more families will flee like I had to run off, to save their children from being abused and tormented by violent ghetto children.

This, in turn, leads to a collapse in society.  The DNC very cynically knows that driving out good people means they win more elections and thus, more power.  The middle class is their enemy.

Trump pulled out troops from the hell hole Middle East where the brave soldier lost so many limbs.  I am so happy.

Fox news joins in blaming Trump for all this, not CONGRESS.  Note how the GOP dinosaurs throw Trump under the bus they, themselves, are driving:

When asked if the president should veto any stopgap funding bill that does not include money for the border wall, Meadows replied “yes.” He added that the “mistake” Republicans had made was that “we didn’t bring up the bill last week when we had the votes.”

IT WAS NO MISTAKE…it was deliberate!  Duh!  They are all so very clever, these clowns.  They assume no one can figure out the obvious.  Why would anyone sane vote for the DNC after this?  Suicidal?  I will note that in Europe, the elites thought they had things under total control only for the populace with zero help from media which attacks citizens nonstop these days (and are collapsing as publishers) that the Real People suddenly appeared and began refusing to go along with their own annihilation and enslavement!

BRAVO.  We know the path we have to take, too.  Trump brought full employment and worked hard to stop the flood of criminals crossing our borders with the DNC enabling crime and invaders and the GOP ‘leadership’ fumbled the ball, NOT Trump.  Will spreading fake news discourage citizens or, as I expect, get them a lot madder at the clowns who are doing this to us.

The Zionists at the NYT are in hysterics about pulling out of Syria which we illegally invaded in the first place.  ‘Middle East STRATEGY in disarray’ is a funny story from hell.  The withdrawal from a failed invasion of an innocent bystander nation is ‘alarming’.  These dirty, filthy clowns want to keep our troops there forever and ever just like Iraq and have their arms and legs and hands blown off by ‘terrorists’ there so terrorists can sneak into the US at will and attack us all here at home.  Wonderful, isn’t it?

16 responses to “DNC/RNC Treason In Congress: No Money For Wall So VET Raises $1.4 Million in ONE DAY For Wall”