The anti-Bilderberg global warming scam demonstrations continue onwards in France.  Some French protesters tried to invade the secret island Macron uses to hide from his people in Southern France!  This news irritates the Bilderberg gang so 90% of the news I get about these comes mainly from Russia.  Great, full coverage from Russians!  Nearly nothing from anyone else.  The mainstream news, if they report this at all, constantly claim there are few demonstrators which is totally false.  I am amazed at the determination of the French people to these marches against Macron!

The BBC has nothing, of course.  The NYT is totally allergic to reporting news about the uprising in France: 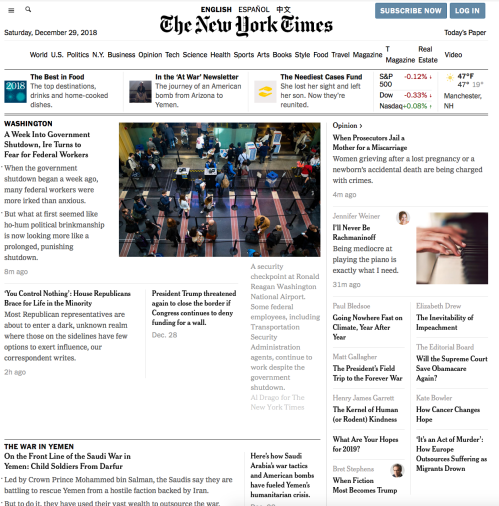 They do have the usual front page story about how we are roasting to death:

HAHAHA.  They have the old story about Hansen screeching back 30 years ago at the beginning of the usual 30 year weather cycle, this one was ‘warm’ just like the present one is ‘cold.’   The riots in France are all about global warming junk.  That is, heavy taxes on the People to prevent them from using energy so that the planet will be much colder.

The long, long editorial rehashes the history of this scam.  Of course, they buy the fairy tale that CO2 heats the planet and not the sun.

Without exception, all the videos of these many demonstrations including today’s march is nearly only on Russian TV venues, not French or English or American.  The Russians are showing all the demonstrations, in full, from beginning to end.

This picture of the Eiffel Tower all lit up like a beacon to show the lunacy of global warmism: hello!  The People are demonstrating due to rage over being told to freeze to death in the dark because this will ‘save the planet’ from being warm!  Yet the elites don’t move into tents or trailers and live cheap!

They live in palaces and brightly light up their landmarks and their palaces and they fly private jets!  This is grounds for outright total revolt.  The refusal of all the rich from the Queen of England and her useless spawn to the California twits running Twitter, all these clowns are criminals who do not practice what they preach.

The Pope lives in one of the biggest palaces on earth and yaps about global warming!  Arrest them all!  They all deserve to be punished severely for they are destroying the planet earth.  Anyone living in a palace or three, using a fleet of armored cars and have yachts and helicopters and private jets: they all should be arrested, their goods destroyed for what they use is killing the planet, isn’t it?  Eh?  HAHAHA.

Practice what you clowns preach, I say!  And they won’t.  They can’t.  They want to kill us and continue merrily along, doing as they please.  Like all the SJWs who work for them, they have a double standard in life.  We are all to be punished and abused while they do as they please. 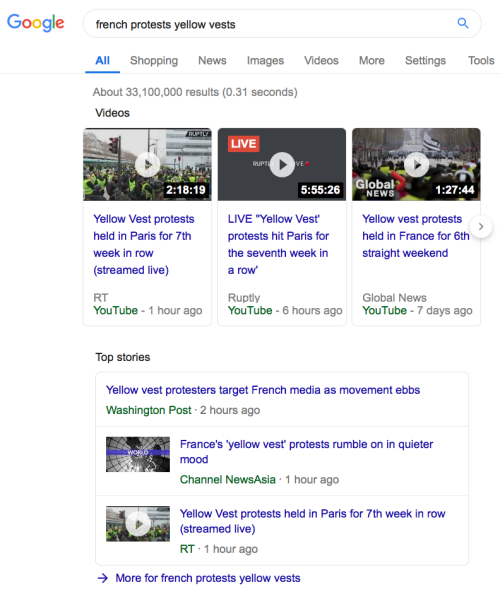 Note how the reporting is so crummy here in the US!  Russian TV has full coverage!  We have nothing but lies here.  The NYT, being a top Bilderberg gangster operation, claims falsely that the demonstrations are ‘ebbing’.  Channel News Asia claims, again, falsely, that they ‘rumble on in quieter mood’.

What I saw was demonstrators moving from one area to another, the police toned things down a little but were still violent.  The demonstrators were not there to fight, they were there to make a point and it was a very big demonstration, very determined since the government continues to push them around and ‘kettle’ them and attacking them.

But they continued onwards, relentlessly, singing and chanting.  People were beaten up by the thugs working for Macron.  The crowds did defy the police.  When blocked, they climbed fences and other things, building bridges out of wood pallets in one example.

It was not nearly as violent as the previous two weekends.  But the determination to come out yet again and defy Macron is the important news that the Bilderberg gang dare not report.  ‘Paris officials said they would continue as planned with preparations for a fireworks display and sound and light show on the Champs-Elysees under the theme “fraternity”.’ says the News France 24.

HAHAHA.  Yes, the Yellow Vest is ‘fraternal’ being mostly male.  Macron is in Africa this week, parading about, pretending to be a world ruler.

Macron brought enough champagne, fois gras and chocolate for 1,300 troops with him. The president’s personal chef Guillaume Gomez made the trip as well to ensure the troops received a holiday meal from home despite temperatures that can reach 32 degrees Celsius (90 degrees Fahrenheit).

According to the Elysee palace, Macron is using his first visit to the north-central African country to reaffirm his commitment to the fight against extremism in the region. The French government’s objective is to strengthen its partnership with the new anti-jihadist force of the G5 Sahel supported by Mauritania, Niger, Mali, Burkina Faso and Chad.

So, he is fighting ‘global warming’ (I will note that in Paris, everyone was wearing thick coats!) and he is fighting ‘jihadists’ in Africa while letting them pour into France!  Great moves there, buddy.