Covington Academy Children Should Sue Everyone Who Defamed Them, Abused Them

The national epidemic of child abuse hurled by adults at school boys, put their lives in danger, physical harm.  The events surrounding the child abuse by mainstream liberal media and all the crazy adults who joined leftist activists to attack children who were ‘white’ is a classic civil rights issue.  The left, far from backing down, are doubling down, desperately trying to find videos where children who are white are saying the wrong thing.  This story is far from over, I expect a civil rights action to happen due to this mass move to use CHILDREN as a tool to push for a race war.  Liberals have now hit rock bottom, utterly and totally evil.

Sarah Sanders: "I have never seen people so happy to destroy a kid’s Life."

This is a growing story because it hits the target: the overt racism directed at white males is so out of control now, it is aimed at white boys.  The intent is to kill them.  It is painfully obvious that the desire of the left is to eliminate all white boys.  This is disgusting, utterly racist and totally evil.  Not content with limiting job choices by forcing businesses and schools to hire mainly females and ‘minorities’ (sic—none of these are minorities in planetary numbers) the liberals want to murder white boys, too.

The boys’ school is closed due to fear of activists doing mass murder.  White boys are covered by the Civil Rights Act which has been used as a tool by leftists to defame, abuse and discriminate against white boys.  White girls are also slated for attack over time, they are too stupid to see the obvious end of all this.  Many people have this odd idea that the Civil Rights Act doesn’t cover white European boys.  But it does.  Go read its language!

Southern Poverty Law Center racists refuse to apologize for calling for a bunch of white children be killed or raped due to being ‘racist’.  This happens all the time now only up until this week, the adults were careful to not attack 14 year old boys.  But now, they have stepped off the moral cliff edge and are now falling straight to hell.

Here is an interesting development: Poland is under severe, sustained attack by the Bilderberg gang for refusing to import millions of angry male Muslims.  So they want to invite the boys to Poland to honor them! 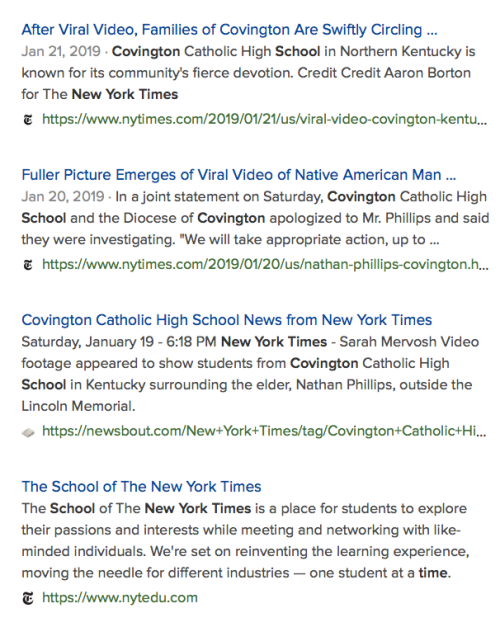 Below is a picture posted online on Twitter, comparing how liberals talk about white boys:

The victim of school shooting was coddled, cared for and pushed ahead into a top college by the NY Times and other media giants.  The kid who didn’t punch the ‘Indian’ who was a fake Vietnam War vet, he is being defamed deliberately by all the media giants except for Fox TV.

Here is the utterly evil NY Times slime about the children:  According to the NYT, the event in DC was instigated by the children, not by the dueling adult political religious radicals who were attacking EACH OTHER before they jointly decided to attack the children who showed up in the middle of this dispute between the Brooklyn black lunatics and the ‘Indians’ who were both demonstrating against Trump.

The video clearly shows how the students stood back and turned their backs on the squabbling black/Indian gang who were banging on each other, cussing and swearing.  So the two gangs decided to turn on the kids, seeing a great target for their racist hatred.  Here is the NYT report:

Right away, the NYT lies.  How ‘unusual’!  HAHAHA.  They always lie.  They lied about me, they lied about world events, they have been lying all my long life.  They can’t help but lie about stuff.  It is now naked to all, we have more and more proof of how often the NYT lies which is constantly.

He beat a ceremonial drum as a boy wearing a red “Make America Great Again” hat stood inches away. The boy identified himself in a statement released on Sunday night as Nick Sandmann, a junior.

The article doesn’t mention that the drummer pushed towards the boy and then parked himself there and began banging on the stupid thing while menacing the young boy.  This is called ‘assault’.

It was a provocative image that rocketed across social media, leading many, including the students’ own school, to condemn the boys’ behavior as disrespectful. But on Sunday, Mr. Phillips clarified that it was he who had approached the crowd and that he had intervened because racial tensions — primarily between the white students and the black men — were “coming to a boiling point.”

This is a total lie.  This man never tells the truth and the NYT fake reporter, a female, didn’t probe very deep, she accepted all his lies right up front.

“I stepped in between to pray,” Mr. Phillips said.

In his statement, Mr. Sandmann said he did not antagonize or try to block Mr. Phillips. “I did not speak to him. I did not make any hand gestures or other aggressive moves,” he said. The encounter became the latest touch point for racial and political tensions in America, with diverging views about what really had happened.

Banging a drum in a child’s face is very aggressive.  Doing this while glaring at the child is an assault.

In a lengthy video posted to YouTube, the Hebrew Israelite activists shouted insults at Native Americans and the high school students. One of the activists, Shar Yaqataz Banyamyan, denied in a Facebook video that his group had been instigators.

On Sunday night, Mr. Banyamyan said that their words had been misconstrued as hateful and that they, in fact, were being mocked by the students.

Except there is no proof of his allegations.  Nor proof of any allegations by any of the two groups of ‘Indians’ and ‘Black Hebrews’.

The parent and Mr. Sandmann’s statement denied that the students chanted about building a wall at the border with Mexico, as Mr. Phillips had said. But in an interview on Sunday, Chase Iron Eyes, a spokesman for the Indigenous Peoples Movement, which organized the march, said he had also heard chants of “build that wall,” a rallying cry of supporters of Mr. Trump.

The people chanting ‘build the wall’ were the Brooklyn black activists!  Both groups are lying here.  The NYT ‘reporter’ (sic) didn’t bother to check the videos to see who is telling the truth, of course, she is very stupid and thus, works for that stupid paper.

Around that time, he said, Mr. Phillips approached, asking to borrow a drum. Together, they headed into the center of the students, creating a sort of prayer circle. They sang what he said was a well-known spiritual song associated with the American Indian Movement of the 1960s and used for prayer and resistance.

This is a total lie. I know this guy, he hangs out with Japanese anti-nuclear drummers who live in the US and go around beating the exact same drums, I knew these Buddhist nuns and they love the ‘American Indian’ stuff a great deal.

There are photos of this guy banging his drum in various places over the years. He didn’t ‘borrow’ it at all.

Moments later, the group of students disbanded. But to many, the interaction — and the disparate way it was perceived — reflected the national mood.

This is an utterly insane article. We knew from the first hours of the mainstream attempt at attacking white children, that the kids were standing there waiting for their buses to pick them up!  The buses arrived and the students left.  Sheesh.  Three strikes and you are out, NYT.  This is far more than three strikes.  There was barely any truth in the entire article.

Here is the Today Show feminist monster attacking the young lad who is a legal CHILD, telling him, he owes everyone an apology!!!  He was basically at fault for standing still while a deranged adult assaulted him using his drum.

"Do you feel from this experience that you owe anybody an apology? Do you see your own fault in any way?”

Tune in to @NBCNightlyNews for a preview of @SavannahGuthrie's interview with Nick Sandmann. Full interview tomorrow on TODAY. pic.twitter.com/7Croh0Toyj

Here is a video showing the entire truth about the drummer dude who is also a liar as well as a child abuser:  he was never in Vietnam, he worked as an electrician in the US, not a fighter in Vietnam.

I hope the parents of the children sue the NY Times.  They should sue all the media.  I wish I could sue the media but I can’t, they never lied about me, they would just never report the actual news, they did lie about events in hopes of making life harder for me but the gang of leftists who tried to get me killed: the politicians went to prison!  Yeah!  And one killed himself.  This is because on top of that, they were all crooks, too.  A life lesson here.  Crooks lie about stuff.

7 responses to “Covington Academy Children Should Sue Everyone Who Defamed Them, Abused Them”