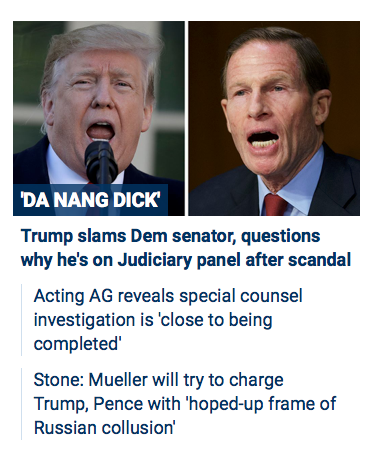 The Bilderberg gang is very anxious now to arrest Trump like they arrested Roger Stone and charged him with the equivalent of jaywalking: visiting or communicating with Wikileaks and Assange.  Wow.  Talk about the Soviet Union here!  Now, they want to arrest Trump based on utterly insane junk about ‘Russian collusion’ which is ridiculous.  Trump has been prevented from doing basic diplomacy due to all this.  The clowns accusing him are also big on doing treason stuff like demanding open borders so foreign men can openly invade and attack us.

First off, before talking about DC politics: five police in Houston, Texas, were shot in a gun battle with drug dealers.  The NYT carried a hilarious article all about the shooting all the while being extremely careful to not identify the criminals.  Many people were happy to talk to the Hispanic NYT reporters, one of which is Manny Fernandez, yet not a peep, a hint (this is in a Hispanic neighborhood!) who the drug dealers shooting at the cops, what ethnic group in which they belong.

Nope.  That is ‘verboten’ news.  A young, white male school boy in DC who stood still, smiling at a deranged drummer makes huge headlines with his full name, what school he belongs to, attached are descriptions about what sort of horrid boy he is, smears galore.

Some Hispanic (are they illegals, too?) drug lords probably died in the shoot out: not a peep about who they are, what they looked like, why they were in that neighborhood appeared in the NY Times article.  Nothing.

Three reporters!!!  And near zero factual information, not even rumors about the most important news, namely, who were these creeps shooting the cops.  Nothing.  Not even curiosity.

Now, after distracting myself with that news tidbit, on to the big news again: the deranged screaming about Trump being a Russian agent must bemuse Putin. Once again, Putin is against something Trump is for and they clash! Imagine that! Amazing, isn’t it? 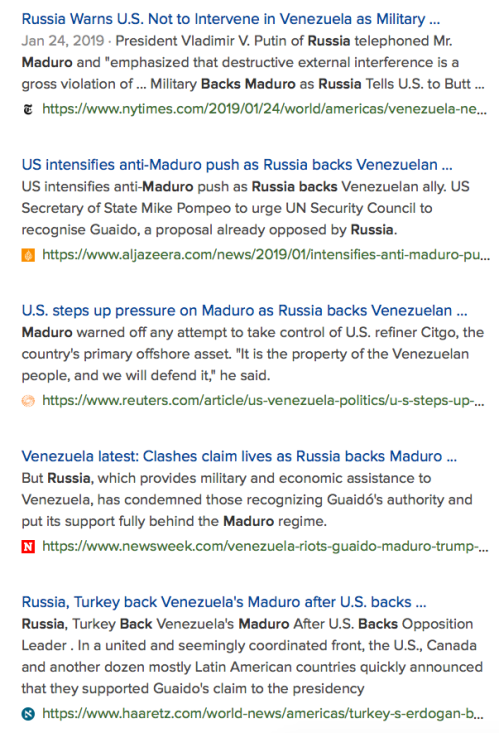 Once again, as I keep pointing out, Turkey is on Russia’s side.  For some strange reason, this barely makes NYT news, of course.  That paper is reaching total uselessness.  Some people posting stuff at my blog (you all know who you are) are freaking out over what is going on and backing the present President of Venezuela even though he is obviously inept, corrupt and stupid.

Some people think the CIA is printing all those zeroes on the paper money in Venezuela.  My assurances that it isn’t the CIA doing this, it is the government of Venezuela doing this.  I must remind people that Chile was headed down that road years ago and the CIA did do a coup (there was no election) and afterwards, Chile prospered greatly.

Ahem.  I thought, in my youth, that it would be bad.  But soon after that coup, my dad went down there to build telescopes which are now quite famous and everything is going quite well there now.  My dad was right and I was wrong.

Venezuela is being systematically destroyed by crazy financial policies that destroy many a nation, the list of leftist regimes that destroyed their home states is extremely long.  Even the EU states that trended towards socialism are falling apart now, too.

There has to be balance!  Meanwhile, in France: Foreign troops, the ‘European Gendarmerie Force’ brutalized anti-Macron demonstrators. I saw it happen, they all wore black like ANTIFA but had this red arm band. I watched them attack and set on fire cars while the Yellow Vest demonstrators either stood aside or asked them to stop. I saw it all, live, via Russian news feeds.

I spotted how these black clad violent rioters then ran behind the state police and hide there! I actually saw this and remarked about it here on my news service.

The marchers against the government are now being blamed for all this just like the Covington School boys were blamed for the deranged, foul leftist or radical racist adults who attacked the kids verbally.

In Venezuela, the government is collapsing due to printing money like mad.  In Syria, the US/EU/Saudi/Israeli attempt at a coup against Assad failed.  I supported Russia’s efforts there because it prevented the sort of religious cleansing horrors the US/Nato etc. created in Libya and Iraq, for example.

In Venezuela, Russia is in the wrong.  What is happening there is terrible, people have been lied to about what is money and how to avoid money traps (a problem here, by the way, too).  Money is magic.  Anyone can make money out of thin air, look at bitcoins.  Utter rubbish of zero real world worth yet people worship it as ‘wealth’.

All money is, very simple: it is a system to assign value to things that are valuable like cattle or sheep or bricks or trees or people.  Gold has been ‘wealth’ for a long time, thousands of years, but it has much less value as anything but decoration or in modern times, electricity, to be worth anything except ‘look at the shiny stuff’.

On the other hand, cattle and sheep are life and death issues.  They keep us alive and warm and protected, just for example.  And the people of Venezuela are not being kept fed and protected!  This is a massive failure of the ruler of that unfortunate country.  Anyone else would be better if they can stop the presses from printing fake money and resume normal banking and money valuation that isn’t running off a cliff.

Here is news of great importance to me: Rep. Duffy wants to give Trump more power to control out of control ‘trade’ with China which runs one way trade with the US, leading us to eventual bankruptcy.

Duffy is a member of the Republican Main Street Partnership.[48]

Oh no, trade wars?  Yes, trade wars.  The Chinese leaders told me they were going to run one way trade with the US, back when they lived with me in New Jersey.  I warned Reagan’s people about this and of course, since Reagan was working for the Japanese exporters, my warnings were tossed aside.  I told everyone of this plan back then!

Well, it is running hot along a rail to hell for us all.  Trump is trying to stop this, the Bilderberg gang wants this to happen…it will bankrupt America and has to be stopped.  It is life and death in our future, I might be dead when this happens, being rather old now, but my grandchild has to deal with it all.

There has been a coup in our country and Trump thwarted this with his election and the freaks doing this to us have been holding meetings about this, the latest being the Davos meeting this last week.  They are screwing up the internet worse and worse, online searches are becoming stupider, You Tube is now beginning to actively hide any videos that are to the right of Mad Madame Mao and her Chinese grandchildren.

The internet is being warped more and more by these creeps.  They hate us, they hate the internet, they want to rule us with brutal inefficiency and they intend to enslave us all.  Or at least, destroy our currency so it is utterly worthless.