I was flipping through Russian news and found out that there is right now, ongoing French workers demonstrating against Macron, singing patriotic songs, more organized than ever and this, on Tuesday after the huge battle in front of the Bastille just three days ago!  There is definitely a full ongoing revolt now in France.  This is huge news.

Paramilitary police were called out yet again.

The demonstrators were ten times louder and energetic than even last weekend.  They are very much ‘fired up’ and filled with a sense of being unified and on top of things.

The police and paratroopers are being rapidly bussed all over the place in a desperate attempt at stopping the singing, dancing, yelling mob of Yellow Vests.

All of this is after a huge show of force by the Macron goons.  It didn’t stop the demonstrators.  I know how this works: when we were fighting against the Vietnam War, we were attacked frequently by the State only to get USED TO TEAR GAS, for example.  We all thought it was very funny until the State began to kill students demonstrating.  Then, it became very serious and ugly.

Then Nixon surrendered to us, more or less and went down in flames.

The demonstrators today are doing a victory dance.  They are not intimidated.  They are winning.  The State doesn’t control the agenda.  This is what we call ‘showing spirit’.  The global warming scam is all about crushing the working class.  Coupled with that is to flood the country with legal and illegal aliens and use these to drive down wages, raise rents and crush unions.

LIBERAL politicians are doing this to workers!  The split between the unions/workers and the comfortable upper middle class is on full display in France this winter.  My very first riot in my life was in France, 1968.  This is when the government sent in army tanks to drive us from the streets.

The clank/clank/clunk sound of the tank treads on cobblestone is something I won’t forget!

After singing to the police, the demonstrators leave and head further on their march through Paris.  This is very close to being an outright revolution now.

Heading through the square, away from the police lines, it is now early evening in France.  Unlike Saturday when the fight with the State lasted into nightfall, today, the State didn’t attack violently and lo and behold, the demonstrators peacefully returned home after making a very strong point, the citizens matter, listen or else. 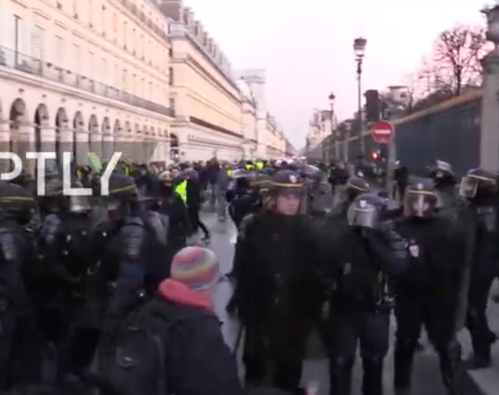 Whoa!  Suddenly, the police cut the crowd in half with others marching ahead while blocking the rest who are now arguing with the troops.  The marchers are turning around to see what is going on and beginning to change direction and come back down the street to confront the State.  Looks like Macron wants another riot.

One lady yells in French, ‘You are a bunch of fascists!’  The police line breaks up and the demonstrators rejoin and continues down the street, together again.