Computers are the new umps: Yes, here we are, Futurama time.  The great SF writer, Isaac Asimov predicted all of this, he invented the whole concept of robots and how to manage them.  Humans are being replaced by robots in many systems.  At the same time, our schools are training young people to be utterly useless, totally clueless and demanding socialism since they have no marketable working skills after being taught how to be utterly incapable of functioning as real adults.  We are at a cultural crossroads here and not a good one, either.

Computers will be used for ball/strike calls starting April 25 in the independent Atlantic League, where the distance between home and first will be shortened by 3 inches. The ground between the mound and home plate will lengthen by 2 feet for the second half of the season beginning July 12.

That is going to throw a crimp in the arms of all pitchers!  It will create a good degree of chaos at home plate, too.  These changes are odd and I suspect done for TV transmission reasons, not that it was needed.  Or perhaps they just want the sluggers to hit more balls lest the audience is bored.

The 60-foot-6-inch distance between the front of the pitching rubber and the back point of home plate has been standard since 1893, but Major League Baseball reached a three-year deal to experiment in the Atlantic League, an eight-team circuit that occasionally produces big leaguers. Infield defensive shifts will be limited. Pitchers there will have to get used to 62 feet, 2 inches this summer.

The people trying to use this new system complained that the umpire robot missed over 500 throws during the test cycle.  HAHAHA.  Futurama is futuristic.

All twenty-eight members of the US women’s national soccer team sued the US Soccer federation on International Women’s Day for equal pay.  Women’s sports is dying and I guess having robots do it all is the next step downwards.  Equality while having special protections and privileges is the New Woman’s solution to female weaknesses.  More time to take pesky tests, more restrictions on men competing with women on a level playing field, more money despite attracting little to no audiences in sports, the list gets longer and longer. 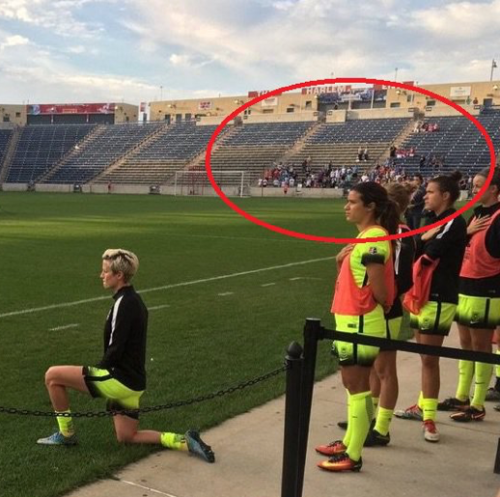 Here is a comment to the above story: Wedge Plissken The Monk • 18 hours ago

No it won’t. The Tranny team will beat the living snot out of the women’s team. Imagine the Olympic Women’s Basketball team-when the US Women’s Team goes tranny, it’ll be a blood bath. YUGE ratings! Roman coliseum reborn!

Some men are anticipating more women being beaten badly by men claiming to be women.  Either we kiss women’s sports goodbye forever or we get reasonable about biology.  One popular TV sport with women is the super sexy women’s beach volleyball: women usually compete in bikinis and men play in tank tops and shorts.

“The athletes are allowed to wear long sleeves, they’re allowed to wear shorts, tank tops,” Calabro said. “But we’ve gotten a lot of athletes on record saying they prefer to wear a two-piece because there are less places for sand to hide. They don’t view it as swim wear or anything like a fashion statement. For them, that’s their uniform.”

No one dares to say the real reasons why women love doing this: it makes money for them.  The Muslim women playing this game wear total coverage, no bikinis.

Here is a news story today about the luckless young graduates of the SJW educational system discovering that the ‘skills’ they learned are worse than useless: no bikinis here!

‘I still recall the look of shock on my supervisor’s face when he realized I had a bachelor’s degree,’ she wrote. ‘If you’re wondering what a degree is worth, the answer is less than $1 ― the amount of the raise I received when they realized I had an education.’

‘I was lucky ― there’s almost always a need for data entry clerks. Perhaps because one must be in a true state of desperation to voluntarily sit in front of a DOS system for hours on end without a break.’

Despite all of her hard work, she noted that she doesn’t make anywhere near the amount someone with a bachelor’s degree is expected to earn. She feels her degree is just a ‘tiny blip’ on her resume that is ‘almost an afterthought.’

HAHAHA.  I warned everyone way back in 1974.  The SJW educational systems are run by mainly women who hate men now and want to do ideology, not teaching people how to think or grow up.  I will note the continued childish behaviors of college graduates who are demanding, bitter, snippy, obnoxious and have very few social skills.

However, she insisted she doesn’t regret getting her degree, despite her looming student loan debt. Right now, Brittany’s main focus is working and making as much money as she can.

Hard to make money when one was trained to be obnoxious, difficult, childish, poor taste in dress and activities, ahem…little to no civilizing skills are imparted in our modern higher education.  It works hard to destroy young people, not help them grow up.  It is utterly disgusting. 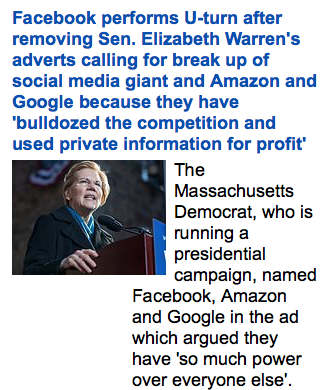 Note how the college educated drones working for the mainstream computer systems are all a bunch of childish nuts.  They are now systematically wiping out any and all dissent to their own systems.  When Warren called for regulations on the online entities, they unpersoned her instantly.

This then made the news, Facebook put her back online.  But this is obvious proof that the tech giants are actively eliminating all dissent to their system rules and these Bilderberg gangsters are being exposed more and more as a bunch of pirates and Maoist monsters.

This crafty attempt at controlling billions of people is quite dangerous.  The destruction of the internet by these internet giants runs alongside obvious censorship by Chinese communists who have a death grip on much of the internet.  The DNC approves of this death grip and want to make it total which is why all of them are cooperating with the Chinese right now.

Treason is normal for the Bilderberg gang, after all.