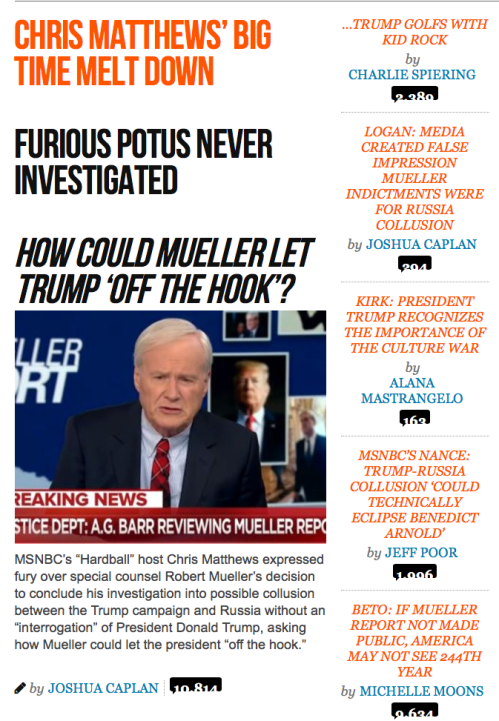 Above is a screenshot from Breitbart News showing the utter meltdown of the Democratic/Bilderberg machine’s scam to frame a President.

It appears that the entire political class of the international powers is having a total fit of hysteria because Trump was shown to be utterly guiltless of ‘collusion with Russia’ which was obvious from day one.  He DID want to do a thing called ‘diplomacy’ but that is now impossible thanks to this gang getting hysterical every time he does normal diplomacy.  This pointless attempt at a political coup doesn’t shame the lunatics doing this because they imagine, once in power, always in power and can do as they please including eliminating the entire Bill of Rights from our Constitution including huge hunks of the Constitution, itself in order to impose a dictatorship upon the citizens of the USA.

These international gangsters want to destroy our rights here in America like they have in all our allied countries across the globe.  Free speech is impossible in many of our ‘allies’ countries.  This is not all, our population is also being pushed into a huge race war as the elites who are mostly white, many are Jewish, push the ‘give privileges’ agenda which has all systems set up to punish white males in particular.  Here is today’s example: 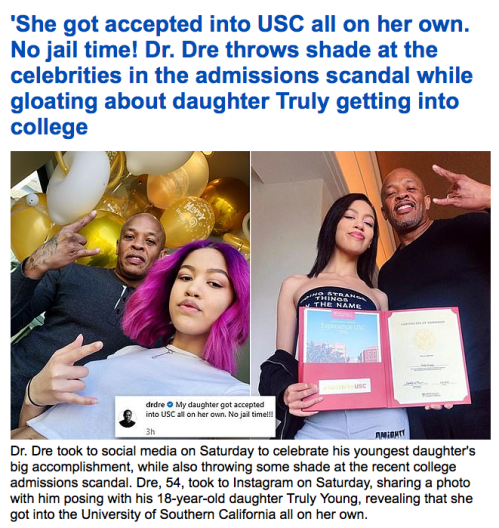 This is interesting because many of the people let into colleges on fake credentials whose parents are very rich were young ladies.  This young lady, celebrating getting into USC, is very smug because she won this position via her skin color.  She is partially ‘black’.  Like Obama, this is used to shoehorn her way into elite schools via her ‘skin color’.

This girl’s daddy is very, very rich.  She didn’t need any crutch to get into school but she gladly used her supposed skin color to jump the line.  Nearly everyone on the planet including populations that have many more numbers than European whites, gets to jump the line ahead of European white males who are around 10% of the world’s population.

Asian youths are slowly being pushed into the ‘discriminate against’ lineup, too.  The rich ‘black’ girl above didn’t have to do very well on any tests to gain entry to a school where the typical Asian girl must score at least 250 points higher to get in.   Meanwhile, at Tulane University, a top elite school, a young man who is organizing on behalf of boy’s rights had his door lit on fire in order to scare him.

He is very scared now.  So Trump entered the arena to support him:

Wonder if the media will report this horrible crime against a campus conservative? https://t.co/0ER3O8NSD6

Report the real news?  Perish the thought!  I looked and looked for news stories about the kidnapped children in Italy and it barely made any news, anywhere, anyhow.  It was vanished nearly instantly.  Meanwhile, stupid news stories beloved by the left get repeated and mulled over again and again, mindlessly.

Here is one story that is making the rounds with the liberals going crazy, as usual and having amazing double standards that are literally psychopathic and sickening: child rape and sex abuse is OK with them.

‘it’s clear that the parents of the two young men were also victimized and seduced by fame and fantasy’. Streisand had said the alleged sexual abuse victims ‘wanted to be there’ as kids. She was referring to now-adults Wade Robson and James Safechuck. The two men are the subjects of recent documentary, ‘Leaving Neverland,’ which details their alleged sexual abuse at the hands of Jackson, from ages seven and 10. Streisand told British newspaper The Times that she believes their allegations, but it ‘didn’t kill them’ and Jackson’s ‘sexual needs were his sexual needs’.

Jackson seduced them and their parents so…it is the parent’s fault.  Wow.  This, from a top ‘feminist’ who is really a demon.  Her claim that this Santa Claus/Easter Bunny pedophile lured children into his orbit to sexually molest them is OK because the children were lured by his fame and money to be molested.

Wow.  Then this demonic female goes on to claim, ‘it didn’t KILL them.’  Aside from suicides, of course which she thinks is the fault of the victims, too.  All of Hollywood is laced with child sexual abusers, has been for eons now.

My rapist didn’t kill me though I needed surgery afterwards.  Nope.  But he did rape me!  This nonsense comes from the exact same Hollywood females who join gangs of howling bitches screaming about being ‘molested’ when a man looks at them funny or touches them or gets drunk with them!  The high school antics of a Supreme Court judge are grounds for being dismissed and eliminated while open rape of small children is OK if one is rich and powerful.

This insane dual standard of ‘all sex is OK’ is connected directly to ‘even looking at someone is rape’ is insanity and yes, these people are utterly insane.  What they are having here is called ‘a double standard’ so a famous director who jokes with convicted pedophiles about how much he loves seeing little girls raped and abused and it turns him on, is reinstated by Disney, a corporation that lures children into its orbit, because he makes good movies showing violent events that are magical and utterly pointless and destructive.

Yup.  Good for morals!  NOT.  Below is a video by Ethan Van Sciver who is a famous comic artist talking about how Disney doesn’t care about child rape jokes:

Gunn is a top leftist Hollywood attacker who goes after other people to get them banned, destroyed or humiliated because they support Trump.  He was a big part of getting Roseanne banned for life, for example.  Meanwhile, his own ‘jokes’ are hideous and disgusting yet he gets to ride the magic Disney carpet back to work,  making obscene movies filled with incredible levels of violence with a heavy sub-text of sexual deviancy disguised as ‘entertainment’ for young people.

Now the pedophiles running Disney are firing many people after merging with Fox.  They will not fire pedophiles.  Everyone else: to hell with them all!  Money is all that matters…after hypocritical virtue signalling.  What a hell hole Hollywood is!