Yellow Vest Protests Bigger Than Ever Before, Macron Hides From Citizens

Louder and bigger than ever: the French Worker’s Revolt.  Paramilitary troops keep them away from the Arc de Triomphe.  But they march relentlessly onwards throughout Paris, down narrow streets and up wide avenues.  Spring has sprung and in Europe, this is when full scale revolts take off like a rocket.  The crushing EU internet laws are highly unpopular and is destroying the internet, already.

The mass demonstration and police riot in Paris yesterday showed very clearly the determination of the French People to resist globalism and the stupid ‘climate change/global warming’ lunacy.  The elites are screaming at us, they are saving us from roasting to death via starving and taxing us all to death, instead.

HELLO!  We got the message: we are to die in order to save the planet so our masters can live in palaces and fly jets everywhere.  The idea that we don’t want to do this for them is annoying, it pisses them off to have to even think of us wanting to have what they have in such tremendous amounts.

Macron’s internationalists have decided to change how history is taught, erasing stuff like the Battle of the Somme, for example.  This is part and parcel of Orwell’s ‘kill the past’ business he wrote about in ‘1984’.  The idea is, there is no ‘France’ and fighting for ‘France’ is futile and the New World Order means allowing alien invasions because this is good for us.

Marine Le Pen, the far-Right leader, said: “The government is dispossessing the French of their glorious history and trampling underfoot the ultimate sacrifices of our soldiers.”

Let in a flood of foreigners, then tell them, history doesn’t matter.  Then have chaos in the schools.  Then have education collapse.  Let in more people who are illiterate and hungry for loot…sigh.  This is ancient history come to visit today.  I am watching the French revolt as I write.

The troops are moving in and attacking the marchers in Paris, again.  The citizens are defiant, they sing in the face of paratrooper violence.

Jean-Michel Blanquer, the education minister, sought to play down the controversy, insisting that Verdun would continue to be taught although it is no longer specifically mentioned in the curriculum. He tweeted: “The Battle of Verdun will obviously be studied in the first year [of the sixth form].”

Below is the French news: 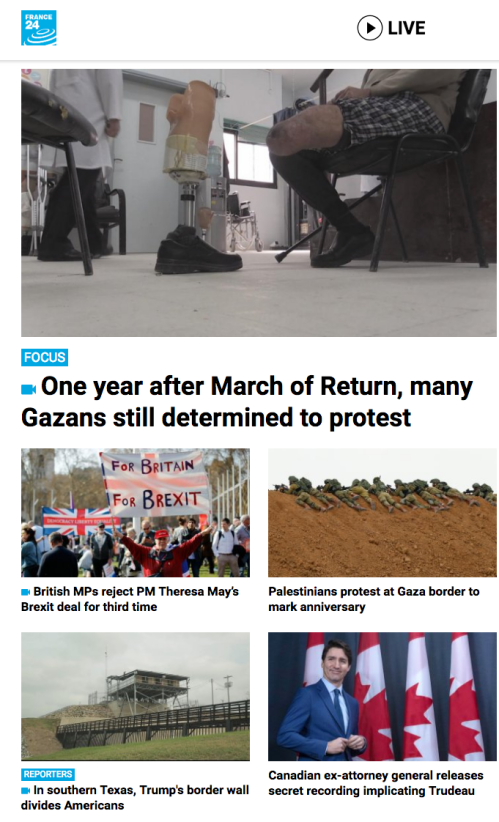 Here is their breaking news now: 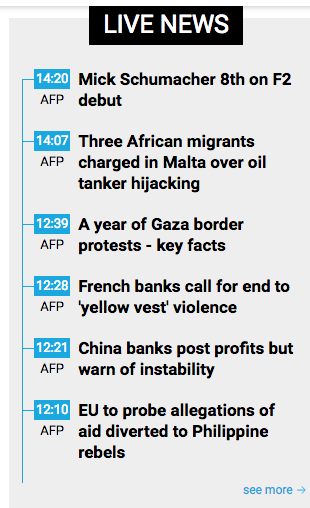 BANG!  BANG! Goes the guns shooting stuff at protesters in Paris.  The only mention of news of this happening is ‘French BANKS call for an end to Yellow Vest violence’ without saying it is Macron who is violent here.

I google Marine Le Pen news and got this: 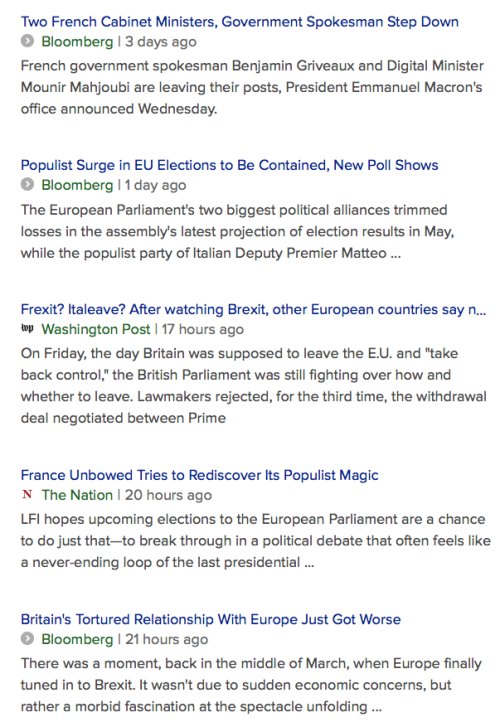 Here is today’s Macron tweets…nothing.  He did tweet three days ago:

A captive audience of small children!  How daring.  He ‘debat aveck 50 enfants de Maine-et-Liore!  He completely dominated them all!  50 children were no match for this genius.  A cheeky Frenchie posted this at Macron’s twitter for twits: 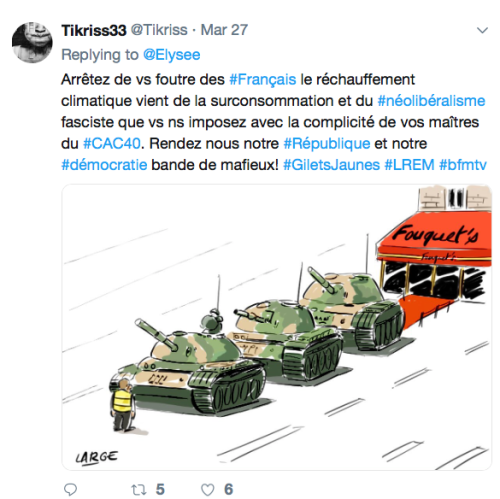 Also at Macron’s site is this from a ‘media personality’ that is a fascist Bilderberg gangster: 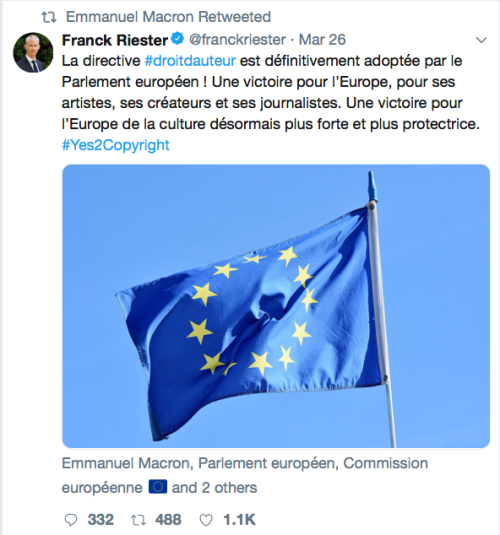 Macron retweeted the above on March 26.  The new draconian rules for EU ‘citizens’ (sic) now makes the internet impossible to use as the elites hammer users mercilessly because they are greedy people who want total domination like in the Soviet Union which was a union of captive states that finally revolted and left.

Today marked the largest street protests ever in the history of internet freedom struggles, with more than 100,000 Europeans participating in mass demonstrations across the region — more than 50 cities participated in Germany alone!

Finally, to illustrate the utter evil of the global ruling elites, here is the BBC front page today that is ‘giving news’ (sic) via by hiding the entire news from France, 100% as if that place no longer exists: 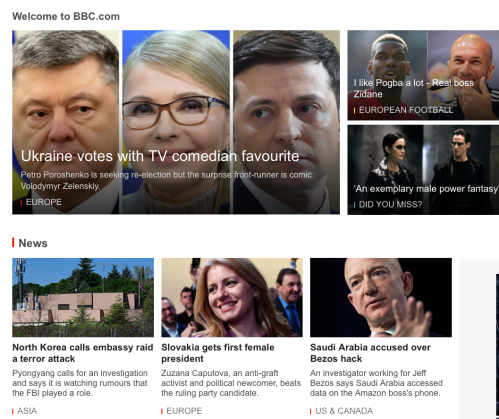 The racists who run the NYT into the ground also have zero news about the continuing uprising in France on their silly front page.  They do have yet another attack on Trump, as per usual, screaming about how dare he allow any oil drilling while the NYT staff happily consume oceans of fossil fuels, running around the planet earth, etc.

They do admit there is an alien invasion!!! And claim, it will stop when it gets hot in summer.  Sounds like the dying Roman Empire, no?  Sounds like a newspaper story in 400 AD.  Meanwhile, Trump is punishing these southern nations by cutting off Fed funds because they are wasting our money.

The NYT falsely claims, this is bad because we need to pay them money to keep their invaders home but this isn’t working, is it?  Duh.  The stupidity levels of the NYT is epic, as always.

The elites hate the internet.  They have unilaterally, in Europe, decided to kill the internet totally.  Here is an example showing how the New Internet operates: it allows powerful entities like Sony to censor everyone all the time based on zero legal rights:

James Rhodes, a pianist, performed a Bach composition for his Facebook account, but it didn’t go up — Facebook’s copyright filtering system pulled it down and accused him of copyright infringement because Sony Music Global had claimed that they owned 47 seconds’ worth of his personal performance of a song whose composer has been dead for 300 years.

What happened was, this pianist recorded himself, playing music others have performed, too.  But Sony unilaterally decided to punish him for ‘copyright violations’ when there was no violations at all.  Anyone whose work even slightly resembles Sony’s files is automatically flagged and removed!

This is disgusting and not surprising.  Sony will then sneer, if you want any of this music by a dead composer, you have to pay Sony for it.  No competition allowed.  This is actually theft by Sony.

The elites are crooks as well as mass murderers.

Hey ⁦⁦@SonyMusicEnt⁩ – apparently you ‘own’ 47 seconds of my performance of Bach. He died 300 years ago. And I made this recording in my living room. Stop being assholes. You own NOTHING! pic.twitter.com/t9IYWf3l70

10 responses to “Yellow Vest Protests Bigger Than Ever Before, Macron Hides From Citizens”