Project Veritas which the Bilderberg gang has removed from many platforms in desperation to stop information flowing to the Little People, has more videos and stories up that make Google look like the Evil Empire in Star Wars: incompetent, stupid, self-destructive buffoons.  Above is a Google message to all its silly, SJW employees on ‘how to protest’ and ‘what to say’.  HAHAHA.  Protest against your bosses, you pathetic little twerps!!!

Smarter non-Google people are having fun making fun of these creepy California/Seattle sillies.  Below is an examination of the orders from the Big Google Bosses, aka, Big Brother and Little Sister, on what to say or write when ‘protesting’: 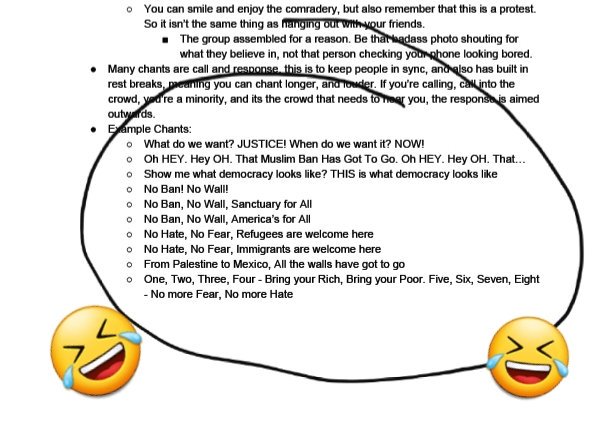 To show how clueless these creeps are, ‘Oh HEY, Hey Oh’ is not how ANTIFA chant.  They yell, ‘Hey, hey, ho, ho…’  HAHAHA.  I do love ‘Show me what democracy looks like?  THIS is what democracy looks like’, all while acting like a bunch of Red Guard Maoists.  Which is exactly what these Berkeley clowns are: MAOISTS.  I know them close and personal. They threatened to kill me which is why I left Berkeley.

Below are some videos made by Google, lectures about how to use the internet to create a Stalinist regime:

This talk is from the Creative Destruction Lab’s fourth annual conference, “Machine Learning and the Market for Intelligence”, hosted at the University of Toronto’s Rotman School of Management on October 23, 2018.

The machines are only as smart as their creators which means, the creators are insane and their machines are also crazy lunatics.  This is easy to spot.  People are increasingly unhappy with the Google version of the internet and gradually, then swiftly, people will move away from all things run by this insane regime and boom: Google goes bust.

Fascistbook (Facebook is now completely dead) will now hand over identities and data of users who are suspected of ‘hate speech’. Of course, the definition of ‘hate speech’ is never explained. I see tons of hate speech from fake liberals and the Bilderberg gang!

That isn’t censored.  Many people with deep pockets are now lurking nearby waiting until time to strike and take down Google.  As Google acts more and more like an editorial paper than a search engine, the teeth will grab that organization by the neck and snap shut.

The deal with France came after talks between French President Emmanuel Macron and Facebook CEO Mark Zuckerberg, Reuters said, adding that Facebook already hands over identity data like IP addresses to French authorities for users suspected of terrorist activity. The hate speech deal was made last week in a meeting between O and Nick Clegg, Facebook head of global affairs, the report said.

France is turning into a police state.  Every weekend, the paramilitary beats up or kills protestors.

“It means that the judicial process will be able to run normally,” O told Reuters. “It’s really very important, they’re only doing it for France.”

Only after Macron is arrested and put on trial, will the judicial process be declared functional.

A Facebook spokesperson told CNET that the company will “scrutinize every order” it receives from French authorities “and push back if is overbroad, inconsistent with human rights or legally defective.”

HAHAHA…like with the Chinese!  NOT.

“As a matter of course, we will no longer refer French law enforcement authorities to the Mutual Legal Assistance Treaty process to request basic information in criminal hate speech cases,” the spokesperson added in an emailed statement Tuesday afternoon.

The AI being used by the social media giant’s engineers is called self-supervised learning and enables the tech behind the site to adapt faster to spotting new forms of hate speech.

‘Forms of hate speech’ is cloudy.  It is meaningless.  What is ‘hate’?  The left hates many, many things and uses obscene words when talking about stuff so why are they still on these stupid platforms?

“It’s really easy to lose hope, to pack up and go home,” Mike Schroepfer, Facebook chief technology officer, said in May. “But we can’t do that. We’re here to bring a better future to people, with technology.”

Fascistbook is pure evil.  It is a tool to snoop on people and then flood them with ads.

The above is a pretty good video.  Cnet reports that Fascistbook’s hate speech machine is faster and faster at censoring and controlling humans.

Artificial intelligence is sweeping the tech industry, and beyond, as the new method for getting computers to recognize patterns and make decisions catches on. With today’s AI technology called deep learning, you can get a computer to recognize a cat by training it with lots of pictures of cats, instead of figuring out how to define cat characteristics like two eyes, pointy ears and whiskers.

And that speed is critical to making Facebook fun and safe, not a cesspool of toxic comments, misinformation, abuse and scams.

If so, this stupid machine would stop most of the ads due to these making ridiculous promises, for example.  Misinformation would mean nearly all SJW stuff and mainstream Bilderberg news will be deleted, too.  HAHAHA.  These fools are stupid if they imagine we will want to be fed tripe all the time.

The wave of censorship continues: Vimeo is run by a foreigner from India and he wants to control what people see as ‘real’.  Lots of people are very pissed off about this and will cease using that platform, too.

Our livestream of the @bigapplevideo conference is about to start! Join us for a day of talks on state-of-the-art video technology right here at Vimeo HQ 🙌 https://t.co/1at6q9aU19

And here is a document released by Project Veritas that shows how our government, the DNC parts, are scheming to control citizens via colluding with the SJW internet services:.   Congressman Gohmert of Texas is pushing for an examination of this criminal activity by leftist Maoists to destroy democracy in America.

“This video shows Google’s biases are now a threat to a free and fair election, all while they hide behind the immunity given by Congress years ago when they were supposed to be a simple ‘town square’ where everyone’s voice could be heard without biased results. In fact, Google references a significant role they see themselves fulfilling in the 2020 elections. This discovery should set off alarm bells throughout the country. It is no secret that Google has a political agenda. Multiple brave tech insiders have stepped forward and exposed Google’s censorship of content and specialized algorithms. This media giant’s ‘social justice narrative’ should distress all Americans who value a free and open society. Google should not be deciding whether content is important or trivial and they most assuredly should not be meddling in our election process. They need their immunity stripped and to be properly pursued by class action lawsuits by those they have knowingly harmed.”

This all looks like how the Soviets destroyed democracy and the news systems in Russia and imposed Pravda on the population.  I actually did read Pravda in the 1970’s, went to the Russian Tea Room on Sundays to look at it, way back then.  It was very amusing just like reading the NYT today.  HAHAHA.

Colorado’s DNC gang in power are stripping the state of its electoral votes and handing these to California and NY.  Fools, all of them are fools.  Not to mention, this is treason.

India wants to ape China.  Mexico just surrendered to Trump as has much of Europe.  The end is inevitable.  India will lose this battle to exploit ‘free trade’ with Trump.  This is 100% why I voted for him.

And the shithole stuff is plopped here for everyone’s enjoyment.  London is rapidly becoming like San Francisco and NYC.  YUCK.