This meeting is necessary.  The Bilderberg gang has been using Europe as the platform to censor all speech online due to the US having this Constitutional right: our beloved First Amendment.  Young fools paying to go to college to be indoctrinated and enslaved, now demonstrate against Free Speech demanding government and corporate control of speech.  Yesterday, France got Facebook which is now Fascistbook, to hand over all identifying information of conservatives who are against the invasion of Europe.

This is rapidly turning to war.  Physical war, that is.  The Bilderberg gang is in hysterics because their cover has been blown by people like Alex Jones.  They are no longer invisible.

There is no definition of ‘hate speech’.  What we do have is an invasion with the Bilderberg gang siding with foreign invaders who are then used to censor all political discussions especially any discussion about mobs of foreigners literally invading all ‘First World’ countries.

The fake liberals who run systems on the internet are shutting these down rapidly.  Here is yesterday’s example of a conservative group online suddenly terminated due to discussing politics in Oregon.

To review: in Oregon, the Republicans refused to attend the sessions in the legislature there and ran off into hiding so they couldn’t be forced to witness more votes to turn Oregon into Communist China.  So discussions about this event which barely made any news in mainstream media, is considered ‘treason’ by the DNC in Oregon and thus, shut down to silence citizens who are very angry about how things are going.

It is now full warfare online: the SJW gang is determined to deplatform, erase, crush, destroy any and all online stuff that is pro-Trump/pro-conservative.  This is rapidly turning into online warfare.  Reddit is the latest disgusting attack on Trump supporters.  These same platforms never ever bans ANTIFA or Black Power or Muslim Jihadis online.

The quarantine means that visitors to the r/The_Donald subreddit will first be presented with a full-screen warning that they will need to manually bypass in order to access the forum. The quarantine also means that content from the r/The_Donald community will be less featured across Reddit. In the past, some subreddits that have been quarantined have subsequently been banned. Reddit says the r/The_Donald forum has repeatedly broken rules, including hosting recent calls for violence against police and public officials in Oregon.

‘Recent calls for violence against police’ is insane.  The right is pro-police.  The left wants to destroy the police and have utter chaos.  The Bilderberg gang wants Stasi style police to control the leftists once they get rid of all conservatives. 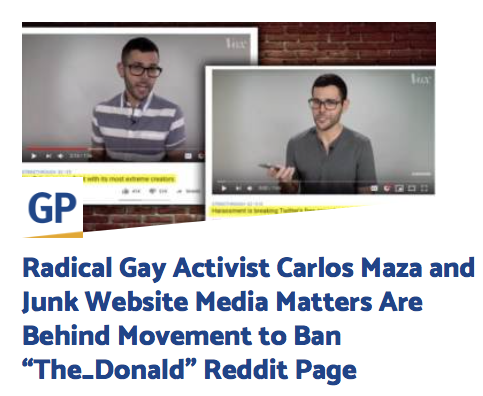 The fake Vox ‘reporter’ is deeply involved in all of this.  He also waves the gay banner high while trying to impose Maoist social rules on Americans.  This is insane and it endangers all sane gays who think many gay activists have gone way too far now and are rousing great anger especially over the issue of child sex.

The Trump administration will host a social media summit on July 11 amid the damning new evidence that Google is actively planning to interfere in the 2020 election as well as other evidence that Big Tech is actively censoring conservatives.

Yes. Trump is moving as fast as he can.  He has many burdens on his time but he is now sufficiently alerted to what is really going on and has plans to deal with all this.

President Trump has said “we should be suing Google and Facebook and perhaps we will” during a Fox Business interview on Wednesday.

Everybody should sue Google and Facebook and all other platforms that discriminate.  Right now, the legal rulings are that these Bilderberg operations are ‘transmitters’ and not ‘creators/censors’ but this ceased to be in the last three years.

He also blasted the social media platforms for “trying to rig the election,” comments of which came on the heels of the explosive video published by Project Veritas in which a Google executive talks on hidden camera about “preventing the next Trump situation” in 2020.

Also in the news nonstop is ‘dead illegals crossing borders’ stories that are supposed to make us all very sad and let in armies of invaders.

Former Vice President Joe Biden tweeted an image of a migrant father and daughter who had died on the U.S.-Mexico border and he attempted to link the deaths to cruelty from President Donald Trump.

Biden is sad because he can’t molest these dead children, I guess.

However, Breitbart News consistently reported on the deaths of hundreds of migrants along the border during the Obama-Biden administration — horrors that then-Vice President Biden never spoke about during his time in the White House.

This is true about all things the mainstream fake news and Congress and the entire DNC leadership cared about back when they had power.  Suddenly, they are all for illegal aliens and invaders and shipping jobs overseas…in public rather than plotting all this in private.

During the Obama-Biden administration, 535 migrants died in one Texas county alone — Brooks County. The county is located about 80 miles north of the Texas-Mexico border and is home to the Falfurrias Border Patrol Checkpoint on U.S. Highway 281.

Can one imagine the lunatics at the NYT giving this information?  Nope.  100% propaganda points, nonstop these days.

The globalists who run ‘mainstream’ media are refusing to cover very vital news…news about how Google is evil and is censoring citizens, spying on citizens and abusing citizens of many countries.  Now Trump speaks out about the Project Veritas undercover scheme to record Google executives.  Google, which has been seriously deteriorating as a ‘search engine’ in the last two years, is now a criminal operation.

Trump is saying it is time to sue Google.  Google is claiming falsely that there is no evidence of them doing what we can clearly see they are doing and which Project Veritas has clearly shown, this is deliberate destruction of incoming information so as to increase the power of ‘liberals’.

And here is the real news that is really scary: 4 ISIS terrorists caught in Nicaragua heading to the US to attack us.

Trump warned our southern ‘allies’ (sic) to stop these invaders and the threat was, all trade and traffic south of the border will be stopped if they don’t cooperate.  Suddenly, they are cooperating after the mainstream media screeched at Trump for daring to threaten these ‘allies’.

It worked!  Thank goodness, it worked.  About time it worked.