ANTIFA Thugs Attack Citizens In Portland, Police Do Nearly Nothing

I am nervous about tomorrow’s Portland antifa rally. They’re promising “physical confrontation” & have singled me out to be assaulted. I went on Tucker Carlson last year to explain why I think they’re doing this: They’re seeking meaning through violence. https://t.co/kpkESjsOmI pic.twitter.com/J45MMshyyK

Andy Ngo, the reporter who was physically assaulted by ANTIFA rioters when they poured milkshakes mixed with CEMENT all over him including his face, has many posts at his Twitter site about ths riot.  The mayor of Portland, like all SJW Democrats, always stands aside and allows ANTIFA rioters to terrorize citizens openly.  Only when these criminal student gangs attack police, are any arrested.  In Portland yesterday, several cops were sent to the emergency room due to injuries from violent rioters on the far left.

This riot was like all other previous riots.  The police stand aside until ANTIFA is extremely violent or worse, when the supporters of the rule of law and Trump start winning when fighting ANTIFA thugs.  The mayor should be impeached but these gangs of violent revolutionaries are in control on the West Coast still.

First skirmish I’ve seen. Didn’t see how this started, but @MrAndyNgo got roughed up. pic.twitter.com/hDkfQchRhG 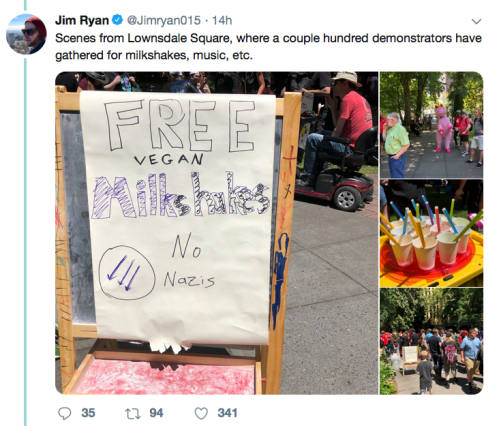 Police have received information that some of the milkshakes thrown today during the demonstration contained quick-drying cement. We are encouraging anyone hit with a substance today to report it to police.

Andy asks for videos of him being attacked and yes, there are plenty now, online.  Summer, two years ago, the ANTIFA gangs were violent.

Meanwhile, the emotional staged event at a ‘detention center’ by AOC turns out to be an utter fraud:

Totally silent about all this during the 8 Obama years, suddenly the crazy liberals at the NY Times decide to be hysterical about how illegal alien children are handled.  This pearl clutching by the criminals running the NYT is pathetic.  It depends on fooling people via having them never learn the truth.  To do this, killing internet searches is key.  At previous Bilderberg secret meetings this last year, the topic about how to change the internet so that only SJW junk shows up in searches was the main topic.

In her Saturday op-ed entitled, “The Treatment of Migrants Likely ‘Meets the Definition of a Mass Atrocity’,” writer Kate Cronin-Furman begins by saying that CBP agents must be held accountable for their participation in upholding immigration law.

“Those of us who want to stop what’s happening need to think about all the different individuals playing a role in the systematic mistreatment of migrant children and how we can get them to stop participating,” Cronin-Furman wrote.

Google is no longer a proper search engine.  The deterioration of google searches is now very severe.  Once upon a time, many links would show up in searches all of them relevant to the words used in the search.  These words were highlighted in yellow for easy searches.

That was killed off about two years ago.  No more yellow words to find information fast in a site.  This is now gone.  Then there was the word search, itself.  I always use more than five words in a search to get precise results, often a dozen words.  Today, that no longer works at all.

A year ago, all sites matching the most conformity with the search words would show up.  This is no longer true.  Unwanted sites that barely are on topic show up first with the sites that match coming much lower in the ranks or not at all.  This monkeying around with the parameters of the searches has degraded Google to the point of non functionality.

Now, it is preventing rival searches functioning so when I use DuckDuckGo, a shocking number of times, nothing show up in the ‘video’ searches, for example.  This deterioration in the internet’s core systems is very stupid, short sighted and violates our first amendment rights for it is eliminating access to our own online data and work via the ‘transmitter’ systems run by fascists who hate democracy and work on behalf of the communist Chinese.

13 responses to “ANTIFA Thugs Attack Citizens In Portland, Police Do Nearly Nothing”