Anxious to appease Muslim infiltrators, the British government puts terrorists in prison for short stints and then releases them quickly to rejoin their buddies who then go forth to kill British citizens and terrorize the country.  Why does the Bilderberg gang do this?  Well it is simple: they want full scale chaos and as their motto says, ‘Out of chaos come order’.  Arrest the people who released this terrorist!  Charge them with treason.

END_OF_DOCUMENT_TOKEN_TO_BE_REPLACED

Another Multi-Stabbing Attack At The HAGUE, Netherlands

The trigger here must be the beginning of Christian celebrations in December which starts roughly when the US has its own Thanksgiving.  It is interesting how this is unfolding, these events often are connected to religious celebrations.  People are told by the Bilderberg gang that Muslims won’t do holy war against everyone else even though we see this across the entire planet, wherever there are large Muslim populations, they fight everyone around them who is even Muslims but slightly different.

END_OF_DOCUMENT_TOKEN_TO_BE_REPLACED

The two Bilderberg giant news groups, the Washington Post and the NY Times, both thought the terror attack on London Bridge was a lesser news story and thus, not worth top story status even hours after learning this is a very serious story indeed.  The conservative non-Bilderberg news paper in NYC, the NY Post, made the bridge attack in London its top story which is where it should be in a sane world.

END_OF_DOCUMENT_TOKEN_TO_BE_REPLACED

I said to my husband after learning there was a terror attack in London, ‘I bet the top story at the Daily Mail will be about Trump instead,’ and lo and behold…a stupid Trump story (he is tired after flying across the planet and meeting with troops in Afghanistan!) was the top story today while the London terror attack was way down the page at the bozo Daily Mail.  Typical, the leftists hate Trump so much, they are angry he stops terrorists in Afghanistan and don’t give a hoot when anyone attacks us at home.

END_OF_DOCUMENT_TOKEN_TO_BE_REPLACED

Virginia Liberals Want To Prevent ANY ‘Self Defense’ AT ALL

Not content with seizing guns, Californians and NYC lunatics living in Virginia now want to outlaw learning hand to hand combat, too!

How dare anyone learn how to ‘defend themselves.’  HAHAHA.  OK: the left is finally utterly insane.  All those ‘self defense’ fighting skills were created by oppressed PEASANTS mostly in Asia.  Only the Rulers could have weapons!  Well, I hope they pass this stupid law and make Virginia weak again.  What irony this is.  Meanwhile, the fighting Chinese youth in Hong Kong celebrate winning hands down, the local elections.  Congratulations!

END_OF_DOCUMENT_TOKEN_TO_BE_REPLACED 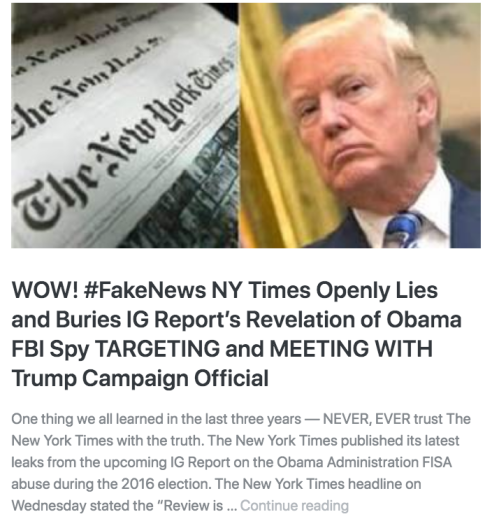 The Gateway Pundit bought the fake NY Times story when it first came out only to discover the NYT lied about the real news. This is normal for the NY Times. They lie about everything, all the time, big and small. They lied about me, repeatedly over the years! I am very happy that millions of people are finally learning this, it is an uphill battle with the Bilderberg founding company, the NY Times.

Earlier. the Gateway Pundit carried the fake story pushed by the NY Times:

We cannot blame the Gateway Pundit, when swimming in a sewer, one can get dirty.  I am happy the Pundit discovered the fraud and are now publishing the truth.  Here is the NY Times headlines for this story which is an utter lie, the headline is completely false:

The Gateway pundit notes in the correction of their previous story this salient fact:

And it’s not until you get to the 14th paragraph where The New York Times admits the FBI had a spy targeting and meeting with Trump campaign official George Papadopoulos.

This completely contradicts their headline!?!

Yes, one of the biggest tools for spreading propaganda while covering one’s asses is to put the lies in huge print at the very top and the truth at the bottom of the story.  This is very deliberate.  It was, frankly, done to me in the past!  It is just amazing how often they do this little dirty trick.  I bet they think they are smart.

No, they are evil.  Pure evil. Stupidly evil.

Wow. The NY Times admits that the FBI used SPIES to SPY on the Trump Team and then they bury this FACT under a pile of bullshit euphemisms. Pathetic. pic.twitter.com/A1omlLEoza

Breitbart news reports: The New York Times previewed — or pre-empted — the release of Department of Justice Inspector General Michael Horowitz’s Dec. 9 report by claiming Wednesday it will show “no evidence” of spying on the Trump campaign.

The reason this review was pre-released is to ‘shape the news’.  That is, they want people to think there is nothing important in this report that will be released a week and a half from now!  They want to muddy the waters, change the conversation, tell everyone, they don’t need to see this report or see any further news from this report.

To put it another way, ‘This report is a nothing burger, don’t bother to read about it!’  Yup.  That, in a nut shell, is how these Bilderberg shills will prevent people from figuring out what is really going on.

CNN — which employs former FBI Deputy Director Andrew McCabe, who was fired for leaking to the media and misleading internal investigators  — published a similar report last week. It claimed the Inspector General’s report would show that the investigation into Trump’s suspected Russia collusion was justified, but that “lower-level employees made a series of mistakes” in applying for a warrant from the secretive Foreign Intelligence Surveillance Act (FISA) court.

For once, CNN didn’t lie to the degree that the NYT lies but then, the NYT has 50 previous years of lying about reality compared to newcomer, CNN.  So, mere ‘mistakes’ were made!  HAHAHA.  Every time Trump sneezes, the media giants and the Democrats scream in horror and howl openly about impeaching him based on absolutely nothing.

They know that the real Ukraine scandal is the Biden (and all the DNC top players) crimes, nothing to do with Giuliani and Trump digging up these crimes!  Since when does one punish the investigators for finding real information to real crimes.

Cohen said, “Well, I think things will come out. Things will come out for as long as he’s president and after he’s president. We will continue to pursue those issues, and we can still have hearings in Intel in Judiciary on actions he took that are violative of the Constitution, that are violative of law that affects our national security. All of those things can still be subject for hearings and possible— if there is something that comes out that’s impeachable, that doesn’t mean you can’t have another impeachment. There’s no rule that you win once and olly olly in-free.”

In other words, it will never stop.  The DNC will regret this ‘burn down the entire system’ fighting they are indulging in.  Their voters want goodies and won’t get a single penny of bribes if the DNC is bogged down this way.  And the anger of taxpayers will rise.

I decided to go to a specialist who goes after crafty criminals to get his opinion of all this: 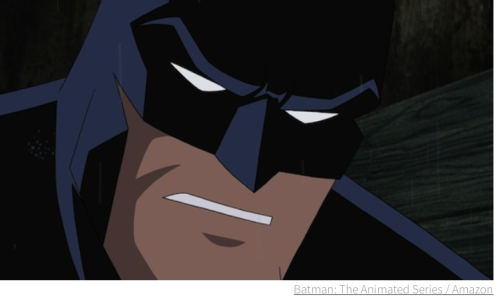 Batman claims that the true criminals will be brought to justice, that citizens have a duty to punish anyone who is a traitor to this nation.  Meanwhile, in our dying universities that are rapidly going insane, students are terrified of swastikas stomped out of the snow and funny leaflets cleverly designed to cause them to think Nazis are invading these crazy lunatic campuses:

These babies are howling with fear that Nazis are invading and will hurt them!  These violent, angry, vicious students think someone will fight them?  ANTIFA is scared?  HAHAHA.  Talk about stupid.  Our campuses are dumber, literally, each year as they suck in suckers who will gain nothing from going to school at these places.  This is a system to tap into loan funds given to low IQ kids who then are on the hook for the rest of their lives.

Why aren’t they revolting against that??? That is the real danger, the real wolf in sheep’s clothing!  The heads of these ‘schools’ have exactly one goal: to fleece as many students as possible.  This is ridiculous.

The Ayatollahs' regime is coming to an end in Iran.

Iran just restarted access to the internet after closing it down while crushing the latest rebellion against the Mullahs.

Religious, social and economic revolts are cropping up across the planet.  Iran’s revolt has been very brutally suppressed while in Germany, frightened farmers revolt against the Green Party’s push to eliminate modern farming.  Another global warming meeting in Europe with celebrities and Democrats in America flying off to Spain to whine about the weather.  In China, corrupt politicians hoard gold.