First, the funky news: senile Biden decided to chat with people while hiding in his basement. Note the clever way he lets his mask hang off of one ear, in his literal basement where no one is visiting him?  Good lord, I hope his pants are zippered at least.  The coronavirus issue continues to roil our nation as southern states with large urban populations see a hike in disease transmission.  Time to discuss the actual details.

The DNC and Biden are in denial of his obvious deterioration in his basement.  He can barely walk now without assistance, LIKE HILLARY, collapsing under the slightest strain, running for office via stumbling and falling on their faces.

One of the top issues being pushed very hard, in between hiding real news about real violent riots in only Democratic run cities, is the new story that Trump is incompetent handling the COVID-19 crisis.  Everything wrong is blamed on him, all the real information as to what happened, is concealed by mainstream media which is desperate to keep things falling apart so voters blame Trump and not the DNC for these DNC messes.

There is now a bizarre push by the Real Rulers to keep us locked down even when there is nearly no disease in huge areas.  For example, upstate NY had barely any COVID-19 deaths while NY City and surrounding suburbs had record numbers of deaths.

Right now, DNC-run cities in the southern half of America are seeing high death rates which meant the entire country is essentially shut down yet again.  Within these cities the population dying by far the most are ‘minorities’ who live not only close together but who also have been milling around outside their homes in mobs all over the place including open riots and looting expeditions.

Young radicals and black residents who are quite young can get sick with nearly no problems, the deaths are the elderly.  Young rioters came home to mom and grand mom and gave them the germs so these people died in greater numbers than say, white suburbanites whose children were not roaming the streets.

Well, white youths decided it, too, was OK to roam the streets, rioting, too!  So they are doing it in select places which incidentally, gets to see higher COVID-19 rates, what a shock.

A look at the past which the mainstream media is frantically burying or rewriting so Trump would look bad: 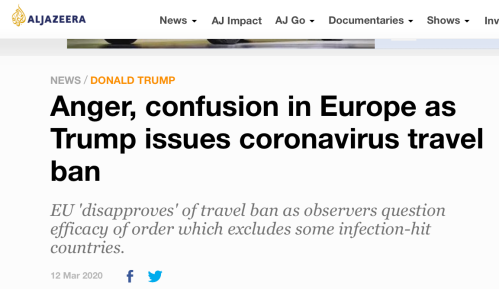 Last March, Al Jazeera carried this news story explaining why Trump shut down traffic to NYC suddenly back then:

Trump’s move on Wednesday came amid rising global panic after the World Health Organization (WHO) warned that the spread and severity of the illness, now considered a pandemic, was due to “alarming” levels of inaction.

‘Rising panic’ as everyone who wasn’t a Democrat leader, finally figured out that Europe was being ravaged by a new mutation of the killer disease that was even worse than the disease in China!

The response to Trump’s move in Europe ranged from anger to confusion.

Back then, in early March last spring, the EU position was, the virus wasn’t spreading much, it was ‘local’ but soon after this story was published, they learned that people flying in and out of Italy were rapidly spreading it to Switzerland, Spain, etc.

“The European Union disapproves of the fact that the US decision to improve a travel ban was taken unilaterally and without consultation,” Ursula von der Leyen and Charles Michel, the respective presidents of the European Commission and European Council, said in a joint statement.

These utter clowns who let the disease rapidly spread across all of Europe, back then they thought they had it under control which was just insanely stupid.  Trump, seeing the dangers, shut down access to East Coast US airports especially NY City.

“The European Union is taking strong action to limit the spread of the virus.

HAHAHA.  So why were they complaining that Trump did this, too?  This is insane.  I wrote about this insanity back then.

“The coronavirus is a global crisis, not limited to any continent and it requires cooperation rather than unilateral action.”

This ‘cooperation’ was the exact opposite of ‘stopping the virus.’  It was a demand we have open borders.  I keep saying, the key issue in this election is OPEN BORDERS.

Trump said on Thursday that he did not notify EU leaders because “it takes time” and he had to move quickly. He added that he excluded the United Kingdom because the country was doing a good job at controlling the spread of the coroanvirus.

He hoped that Britain, which didn’t have any cases back then, was still OK.  The Brits thought so, too, only still being part of the EU, they were forced to leave the London airports open and the disease came to Britain and killed quite a few of them, too.

Meanwhile, many observers said the ban lacked clarity and could be interpreted as a political move.

It is just incredible how the leftists attack anything Trump does especially when he does sane things they refuse to do, themselves.  The utter ineptitude of the EU leaders in this crisis is just amazing.  They did nearly everything wrong.

Schengen and UK excepted: this is not about containment, this is about sending a political message. In a time where the EU is challenged to its core, the US is closing its borders and turning its back on allies,” tweeted Benjamin Haddad, director of the Future Europe Initiative at Atlantic Council.

The ‘Atlantic Council’ is one of the many front organizations created by the Bilderberg gang to control our world and force us to do stupid things.

Al Jazeera’s Laurence Lee, reporting from London, said: “The EU is absolutely furious about this, bewildered, and trying to work out what the ramifications are. They weren’t consulted apparently before Trump said this in the middle of the night, European time.

They are half a planet away from us.  Why wait until these clowns got out of bed during a terrible crisis!  Some of them could have done the night shift, but no.  They wanted to dither and goof around!

Europe totally mishandled the coronavirus epidemic from day one.  Then they blamed everything on TRUMP of course because the EU can’t take responsibility for anything at all not even stopping epidemics which they then transported to the US!

The google search pulls up story after story attacking our President for his handling of the huge medical mess China and the EU dumped into our laps:

And here is where the EU gang sums up what they think happened:

The Bilderberg top paper, the NY Times, continues to work with the Bilderberg TV shows to attack Trump nonstop.  Here is last night’s top attack that was supposed to be funny based on Trump being friendly to the Goya executive the other day:

Just incredibly stupid as well as libel.  The goofballs running major media keep propping up the fake Russia collusion stories.  They make fun of things that never existed.  I feel sorry for people who believe this garbage.

By the way, while driving around my community yesterday, I noticed some of our neighbors put up ‘Arrest Clinton’ and ‘arrest Biden’ signs.  This is beyond the ‘vote for’ signs one usually sees.

Another sign I saw was ‘arrest CUOMO for killing most Americans’ referring to the very high death rate in NY from the disease while the media giants pretended Cuomo was some sort of hero who saved us.

Upstate NY was ‘saved’ but not by Cuomo at all.  Here is the WP whining about ‘lost precious time’ and blaming Trump:

The MAYORS and GOVERNORS of many of these ‘US cities’ lost time because they REFUSED to cooperate with Trump, they all attacked Trump instead, they nearly uniformly were DEMOCRATS doing this and they, not Trump, killed people!  Naturally, mainstream news twists this exactly backwards hoping we can’t remember the recent past.

Rioting and running wild in the streets was the chief response to the COVID-19 event in DNC-run cities.  Menacing, looting, burning, rioting, raping and killing is now running rampant ONLY in DNC cities.  And the DNC is blaming Trump even as they now scream for him to NOT patrol their streets or stop these looters/rioters!

And then they complain that blacks are dying.  The number of blacks dying of COVIS-19 is rapidly being eclipsed by blacks killing each other!  This is insane and 100% the responsibility of the Democratic leadership in Congress and in cities run by that goofy party. 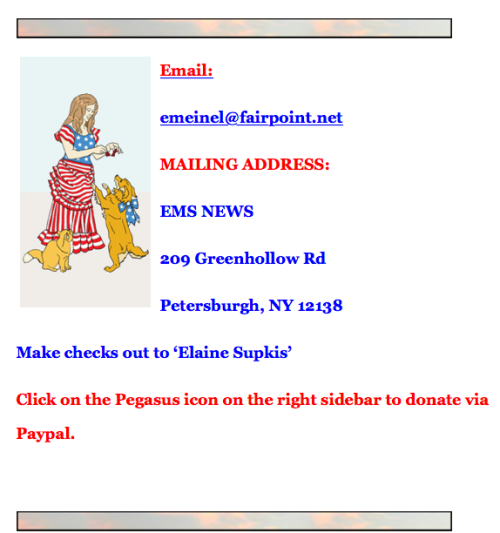 7 responses to “Biden And Entire DNC/Media Giants Have Alzheimers: Can’t Remember Recent Past”