The DNC criminal coup continues: let in as many invaders as possible then have zero checks to see who is a citizen when we vote and thus, have power forever for the DNC gang!  Lovely plan here!  Too bad, it has happened in the past.  This is exactly how the Roman Empire collapsed.  Couple this with degrading the currency and…you get the Decline and Fall of Rome.  As the Roman Warm Cycle became colder and colder, massive numbers of people up north came pouring into the Roman Empire that was very poorly run by 200 AD and the barbarians pretty much took over and mostly destroyed everything functional by 450 AD.

I have been fascinated by Gibbon’s famous book, ‘The Decline and Fall of Rome’ since 1960.  It really isn’t an exciting book.  At the same age, I began collecting Wagner’s Ring Cycle operas which was set in the period when Attila the Hun was on the border of ancient Rome and the Norse gods meddled in tribal affairs in what became Germany.  We are in a Götterdämmerung cycle right now!  Most of the barbarian invasion of Rome after 300 AD was due to factions in Rome fighting for power and needing fighters and cheap labor.

They didn’t realize until Rome, itself, was thoroughly looted and destroyed, that the destruction of the empire was due to themselves being incompetent.  We are now involved in an open invasion of the US by foreigners brought in by one faction in ‘Rome’ who want power and can’t figure out what will happen next.  Especially old white power brokers on the left think they won’t be wiped out by foreign invaders they invited into our country.

This is immensely short sighted of them all.  Right now, in my home state of Arizona where I grew up on the border, the left is doing increasingly obvious and stupid things to cover up their crimes they committed during the ‘election’: 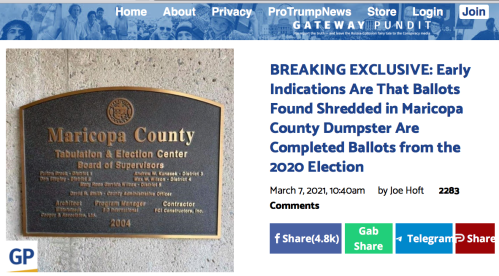 When a court ruled, they had to turn over the voting documents to be examined, they had hidden these and said they needed to clear the decks for the next fake election so they had to make room via eliminating all traces of the past ‘election.’  Well…the judge said, no, they had to hand over all the raw information.  So they illegally shredded it!  It is being reassembled.

The criminals who are DNC operatives, are very scared their ballots will be examined and they said, the papers they shredded were NOT the ballots at all.  But now that these are being pieced together, we learn these were the ballots, obviously.  The frantic power brokers in messed up California are forbidding all examinations or discussions of the ‘election’.  Anyone talking about this topic is eliminated.

Trump has been ruthlessly removed from YouDon’tTube this last week because he talked about the obvious election frauds.  Anyone doing this is eliminated ruthlessly by our Real Rulers.  They are very anxious to not have any examination of this election and our Supreme Court Coup Gang agree: no need to talk about the election!  Just erase everything!

Talking about ‘erasing’ stuff, I notice the Bilderberg gang has been rewriting history and pretending in various TV shows and other media, there as no ‘fall of the Roman Empire’!  HAHAHA.  The Western half did ‘fall’ and fell very badly.  Rome was in ruins for over 500 years which is a very long time to be lying around, in ruins.

Virtually all Roman systems collapsed.  Everything from roads and ports, aqueducts and civic buildings: they all fell into ruin.  In Britain, virtually all traces of the Roman Empire was destroyed by invading barbarians mainly from the Norse/German/Low Lands.  They came rowing over in their swift moving boats and took over everything and had little to no use for Roman buildings.

Why was that,  one may ask.  I would suggest, the longhouses were easier to heat!  Roman buildings were very open and the Roman Warm Era ended with the very cold Dark Ages which was well-named.  Many modern leftists want to pretend the Dark Ages were not ‘dark’  or ‘cold’ at all.

Speaking of barbarians, our Real Rulers are really barbarians.  They have no morals at all, too.  Here is Alec Baldwin, who hates Trump, whining about the ‘cancel culture’ he and his hideous buddies ran for four years.  Now, he wants no sex scandals!  As these running dogs for the super rich freak out, they are now whining, the MeToo movement doesn’t matter anymore.  Time for the ‘She Asked For It’ movement!

The shoe pinches when on the left foot, eh?  These people are so pathetic.  They are put on TV and all over the internet and we have to hear them all yapping day and night and they can’t make up their own minds, what is legal and what is illegal.  What matters is only, what they want.  Anyone else is attacked mindlessly for doing what these clowns do all the time.  This is so ridiculous and obvious now.  Here is an example of two different rules running simultaneously:

This fake female talks openly about sexualizing little girls in a very nasty way.  The horror of this is obvious to me: I have a real transgender daughter who was born with significant genetic problems which made her both male and female.  She is part of this movement for obvious civil rights.  But this is being systematically destroyed by sexual perverts who are men and are totally male, but who like to dress up as female in order to do things to women and even girls.

The Bilderberg gang is protecting obvious male deviants who disguise themselves as female in order to do nasty things to girls.  Or boys, for that matter.  This irritates me no end!  I was raped as a child.  It made many things very difficult for me including the surgeries to fix things in my reproductive parts.  The Bilderberg gang is punishing people to talk back to obvious child molesters parading as ‘females’.

This is ridiculous as well as criminal.  No longer do we have any debates, the deviants who are of criminal intentions are all allowed to run rampant online while anyone noting this is censored and punished.