Police clash with Antifa counter-protesting at the Wi Spa, after several smoke bombs & water bottles were thrown at protesters across the street #WiSpa #LosAngeles pic.twitter.com/fRoXWtmAng

Now that the USA is run entirely by deranged Democrats, any voters who did vote for Biden, hoping to have peace at last after giving leftists goodies…well…things are getting worse!  Crime is running out of control in all DNC run hell hole cities, even rich cities.  DNC run states are seeing more, not fewer riots.  The rioters are attacking citizens and demanding a communist dictatorship, instead!  They are not charged with crimes!  Meanwhile, in black DNC places, shoot outs are openly done with impunity, shooting each other is way, way up, attacking everyone else is way up, too!  Law and order is collapsing wherever Democrats control the courts and police.

The battle over the Wi Spa ‘let full males pretend to be females so they can expose their junk to children’ riots continue.  The left believes that males can do this to children because it is all about what one pretends to be.  If a child molester decides he is a young girl, then he is a young girl according to these deranged people.   This is spreading chaos, of course and is the fault of liberals unleashing an army of hostile male molesters on everyone else.

Police push the crowd of counter-protesters away from the Wi Spa, giving orders to leave the area after declaring an unlawful assembly #WiSpa #LosAngeles pic.twitter.com/00TGQW8CYa

The Democrats running California might be voted out next election.  Right now, many conservatives are openly fleeing the place due to it being uninhabitable.  Washington DC is also uninhabitable:

Two car loads of probably black thugs shot at each other next to the parking lot.  This scared everyone in the stadium who ran out of the stadium and into the parking lot where the shooting happened.  Some of the shooters have been caught but no one is mentioning who or what they all are which is typical when blacks commit crimes these days.  Liberals think, if you don’t tell people who the escaped criminals look like, they won’t turn racist after noticing that most violent crimes are done by black criminals.

Now, everyone assumes criminals are black! This is backfiring, badly.

A ‘America First’ rally was cancelled and forbidden by the city of Anaheim, California.  Claims that ANTIFA rioters will cause problems was the excuse given by authorities.  Yes, ANTIFA will riot and the way to fix this is to arrest them all and like the DC rioters, put them in prison for a long time!  Don’t stand back or release them with no charges, eh? 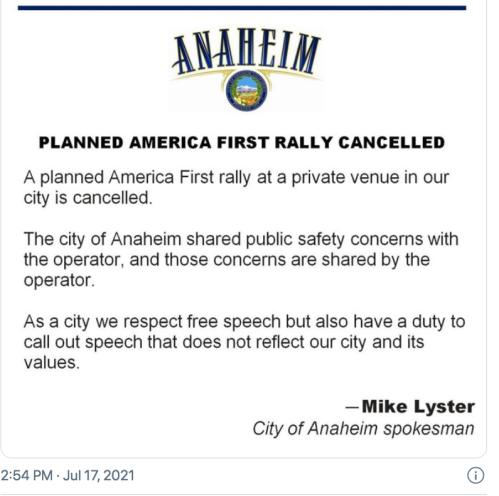 One last story: the executive working for Black Rifle Coffee came out of the closet to attack Trump and his own customers!  This is interesting because that coffee company tripled sales when they supported Trump and Trump voters!  Now, they will discover bankruptcy:

“It’s such a repugnant group of people.”

The executives behind @blckriflecoffee, a coffee and lifestyle brand hugely popular with conservatives, has some choice words to describe part of its customer base. https://t.co/BxTpq0kfQY pic.twitter.com/mbdrBSpwGs

Hating your own customer base is a very interesting way to run a company.  Many are doing this now after they are harassed by non-customers who are on the left and don’t buy these things at all.  Talk about suicidal!

So, hating one’s customer base has a bad ending!  The NFL and NBA are slowly discovering this yet continue to alienate their own customer bases!  They are suicidal.