This will raise gas prices EVEN MORE.

This action is completely discretionary.

Biden has the power to stop it.

Biden stepped on a landmine here: already, Texans said they will leave the Union again if he screws with their oil.  So he screwed with their oil and I can easily predict what will happen next: a civil war which Texas will win due to the DNC having only power in DNC hell hole cities which are horrible places and are totally surrounded like islands by angry citizens of all races who fled these horrible DNC cities.

I know the rural lands will be the angriest and by coincidence, these are the places with the most guns and more importantly, we all can shoot with amazing accuracy, too.  The Democrats are rushing as fast as possible to make it impossible to buy guns and ammo due to this but taking over the storage of both via citizens fighting back is quite likely.

So, more ‘oil shock’ due to Biden biting the bullet?  He will be biting bullets if he thinks this is a good idea.  People are already very pissed off!  Getting them even more pissed off has consequences.

He and his gang will blame Putin but Putin isn’t shutting down Texas oil, Biden is doing this.  Even stupid people can figure out this is so obvious unless…Biden and his son are Putin Puppets!  Yes, they are!  Time to arrest both!  Whoppee.

The ‘climate advisor’ is happy with this.  She like the entire communist leftists, want everyone else to freeze/starve to death.  I harp on this because I was very VERY involved in Chinese politics for many years in opposition to Mao and his mad wife.  Now, my parents are gone and I am old and China is sliding back off the Maoist cliff again.  Sad times for them all.

Here is the letter to Biden from Texas: 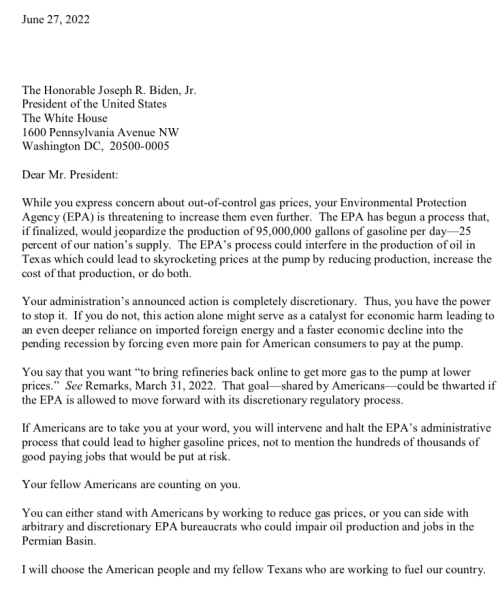 So, we plunge into war against major oil/gas export power called Russia and at home, the President and his Bilderberg gang buddies declare war on Texas.  I see, this is a suicide pact.

We all must learn Russian so we can communicate with the future winners of WWIII.  Here is someone talking about this in English:

I read in Russian news that this was coming along and it now is happening.  No surprise to me.  I am betting Texas will join.  News from Russia (Putin is laughing so hard, he is falling off of his horse):

One response to “Throwing More Fuel On Fire: Biden Will Shut Down TEXAS Oil Fields!”