I grew up in Tucson, Arizona, living at both Kitt Peak and in the desert near Tucson on our ranch there.  The remains of many a hurricane running up the Gulf of California, slam into Tucson and I have witnessed this in the past and find it most interesting to see how this happens, using today’s very nice, lovely weather satellite systems to spy on the earth from high above.  We learn so much from this!  Predicting hurricanes is much more sophisticated these days.  Still, people don’t quite understand fully how these things happen if they don’t know previous history.

NEWS:  A 5.6 earthquake happened in the last 12 hours right where the hurricane is hitting Mexico!

In this case, the history of hurricanes in Tucson!  All observatories are very involved in weather predictions and weather systems since you can’t use telescopes in bad weather!  So Kitt Peak in the 1960’s onwards had a big weather systems array which were destroyed in one hurricane, the winds were so bad, for example.  You can’t close down an observatory quickly when the roof is totally open so knowing what weather will happen next is of highest importance.

Hurricane Orlene’s remains will move northwards as we can see when we look at various levels of wind and rain in the satellite data.  First, here is the hurricane right now, scraping along the Mexican coastline.  It is moving slower and slower forwards due to the mountain ranges:

The hurricane Orlene is being deformed by proximity to Mexico’s shoreline perhaps due to the continuous mountains there.  But at 500 meters high, the ferocious winds diminish the closer to ground level and the eye of the storm is further away from the shoreline: 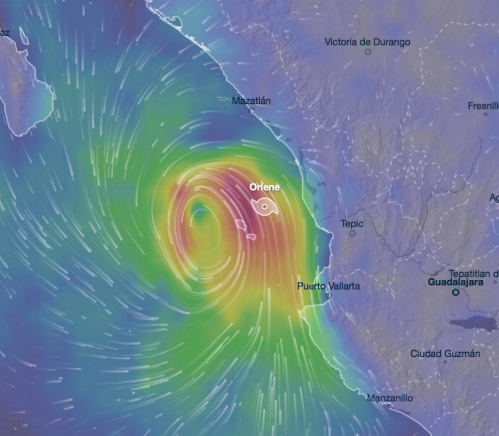 I suspect this isn’t a problem with the satellites recording all this, I suspect there is a problem ‘seeing’ the hurricane due to the malforming of the storm as it is now being pushed away from the landmass by the mountains at sea level but at 1000 feet, the most powerful parts of the storm (1000 feet is always the most powerful part of any hurricane) of this hurricane is closer to land as the landmass tightens up the storm, compressing it.

So the higher levels of the hurricane above 750 meters is moving relentlessly into Mexico but the lowest levels is being shoved out to sea so the hurricane is ‘crooked’ due to this?  I am only guessing now, this is my first close observation of Mexican hurricanes thanks to Vendusky:  https://www.ventusky.com/?p=16.2;-111.6;4&l=wind-100m

The Gulf of California is very sheltered and seldom has any big waves.  I have sailed on, fished on and swam this gulf since earliest childhood and am very familiar with it from top to bottom.  Many hurricanes are shoved by the mountain ranges of western Mexico, into the Gulf of California so the winds do die down somewhat but the hurricanes come to…TUCSON, Arizona, where I lived.

I went through a hurricane of this sort on Kitt Peak Mountain where all the observatories (put there mainly by my father) are located.  The trailer I used to sleep in was swept away from the mountain top during a hurricane.  Tucson gets flooded, of course.  I once had to rescue a lady who refused my warnings to not drive into the flooded streams back then and I had to pull her out again. 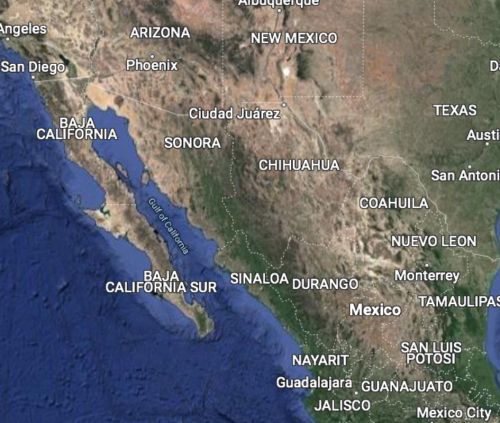 The Durango/Chihuahua (home of the yippiest dogs on earth) mountain range will block this hurricane once it has weakened enough.  The flattest part of Mexico/Gulf of California/Baja California is this part of Arizona and Mexico.  Dying hurricanes pick up speed when passing over this part of the landscape, I have seen this first hand.

All of the many mountains in this region are individual mountains instead of long ranges of mountains like most of Mexico to the south of this region.  Here is the Baboquivari/Kitt Peak/Coyote Mountain range, for example.  All the desert around this three mountain complex is very flat.   To the east of these mountains, rising out of the pretty flat plain, is Mt. Lemmon and Mica Mountain and between them is the Reddington Pass where I used to attend people in car crashes at night due to the dangers of driving too fast into the mountains.

Now lets look at the satellite pictures of all this.  Here are the winds at 2000 meters high: 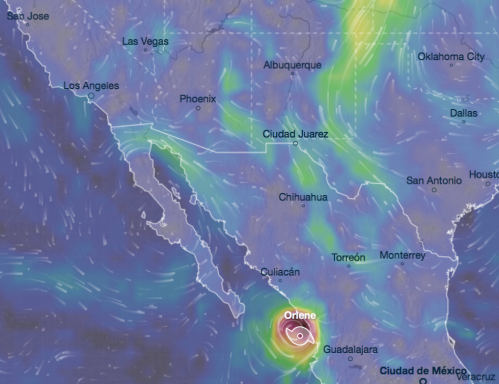 Notice the path from the hurricane to Tucson, in Arizona!  There is a light vortex above Baja California that will shove the storm which is heading north/northwest but at the same time, prevailing winds to the east of the hurricane are moving northwest, too!  This leaves a corridor of still air between these two wind systems which the hurricane will use to move northwards as an unorganized but still, very dangerous and wet storm and when it comes to the mountains in Tucson, it will, like ALL Gulf of California hurricanes, pick of windspeed rapidly again! 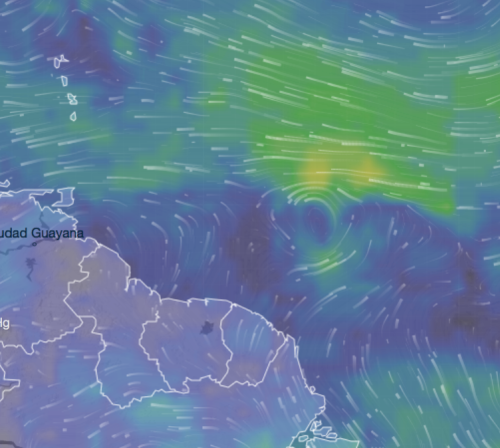 A new vortex is forming at 2000 meters high, in the Atlantic Ocean offshore of South America.  It has a good chance of turning into a hurricane.  We have had very few of these this year, so far.  The Pacific Ocean has had six more named hurricanes so far than the Atlantic Ocean.  There is one forming right now behind Hurricane Orlene, for example.  It is also heading in the exact same direction as the present hurricane, too.