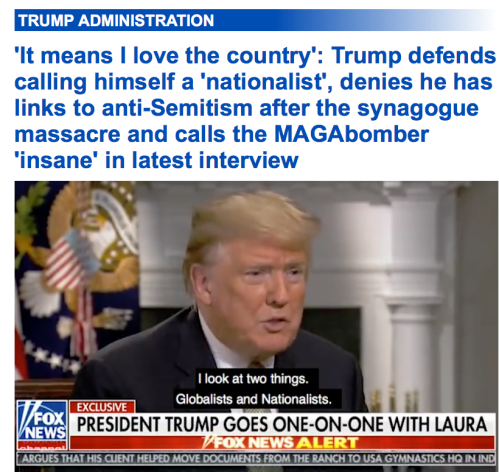 Daily Mail in London is one of the multitude of Bilderberg-controlled media giants.  The Bilderberg gang isn’t ‘liberal’ in the sense of giving citizens their rights, they are globalists who wish to enslave ‘liberals’ who are fools.  Give them the appearance of ‘freedom’ such as any sex they wish, any goodies, these conspirators who are very rich want to control our economic and political systems.  Note how the Bilderberg-run media is attacking Trump and now the new President of Brazil for being ‘nationalists’ and conflating that with ‘Naziism’.  These same clowns love Israel which is extremely ‘fascist’ and ‘nativist-nationalist’ meaning, one has to be a genetic ‘Jew’ to gain citizenship there.

END_OF_DOCUMENT_TOKEN_TO_BE_REPLACED

NY Times yesterday continued to carry the dying flame of the fake story that Putin and Trump conspired to ‘steal’ Hillary’s 97% win in the last election.  This childish propaganda was hatched by the Bilderberg gang and they shoved this forwards for two years and it produced exactly zero real evidence but took down many people over small matters when put under the Special Prosecutor prosecutors.  I nearly wrote ‘prostitute’ subconsciously.   Now we lear Rosenstein wanted to secretly spy on Trump to impeach him on non-Russia stuff.

END_OF_DOCUMENT_TOKEN_TO_BE_REPLACED

Twitter Bans Alex Jones! Deep State Fascism Kills Free Speech as the Real Rulers who conspired to eliminate Alex Jones, work tirelessly to do this and I am 100% against this because it is tyranny.  In Europe, anyone disputing the State of the EU is intimidated, arrested, harassed, threatened by authorities yet the People there are fighting back, voting against liberals more and more.  The mainstream Bilderberg gangsters claim Alex Jones is ‘a conspiracy theorist’ who is presumably, totally wrong…only they just proved him right! They all conspired to ban him when he violated no ‘rules’ as if there are any ‘rules’ online!  These monsters still pretend to be ‘liberals’ when they are really ‘authoritarians’ straight out of the 1984 playbook. END_OF_DOCUMENT_TOKEN_TO_BE_REPLACED 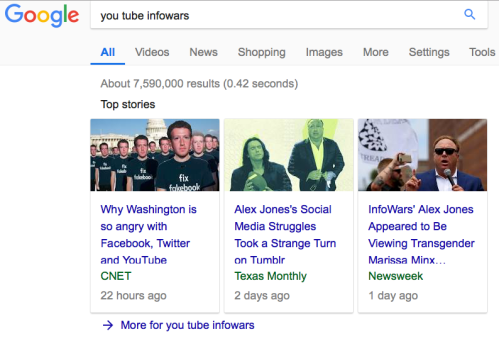 The President made it totally clear late yesterday, all the giant Bilderberg corporations better cease banning American citizens from using their systems to access audiences online.  Google and Facebook and other evil organizations began wholesale banning of citizens who are even slightly conservative.  They hoped to divide and conquer by telling future victims, only the ‘bad’ guys would be censored and then censored people like…Trump, himself!  Now, these clowns are in full retreat and are promising to stop censoring everyone else.

END_OF_DOCUMENT_TOKEN_TO_BE_REPLACED 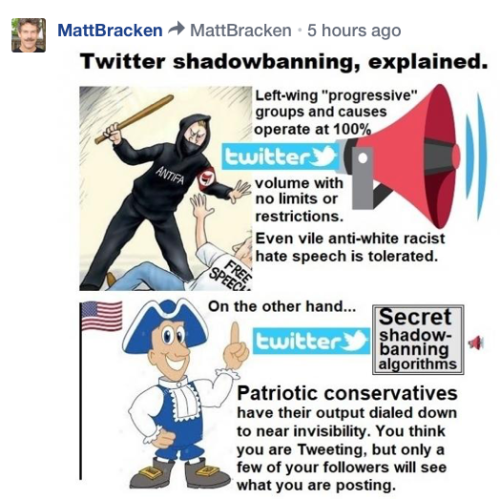 Twitter Permanently BANS Conservative Gavin McInnes and the Official Proud Boys Account: the war on patriotic citizens heats up with NY City and California/West Coast SJW businesses like Apple and Google openly attack and eliminate all opposition to their New World Order Bilderberg scheme of exploiting citizens and looting our country, enslaving all of us.  This war has been planned for quite a while.  Already, Europe is in the iron grip of this gang of international looters but one country after another is defying these criminals and voting for patriotic governments.  Soon, England will do this, too.  Even Sweden is now revolting.

END_OF_DOCUMENT_TOKEN_TO_BE_REPLACED

Infowars is Not Just Being Censored, Basic Business Infrastructure Now Being Stripped as MailChimp Bans Their Email

“MailChimp doesn’t generally comment on individual users or accounts, but we’ll make an exception today. MailChimp notified Infowars that their accounts have been terminated for violating our Terms of Service, which make it clear that we don’t allow people to use our platform to disseminate hateful content,” the statement began. “We take our responsibility to our customers and employees seriously. The decision to terminate this account was thoughtfully considered and is in line with our company’s values.”

END_OF_DOCUMENT_TOKEN_TO_BE_REPLACED

The Bilderberg Coup Continues! Infowars Removed From You Tube/Facebook

VIDEO: After Banning Alex Jones, Left Calls For Fox News, Steven Crowder And Others To Be Banned – YouTube

This is just the beginning.  The stocks of major online businesses are now being hammered by investors as the war against citizens roars onwards.  Obviously, the California crew that runs the state most likely to go bankrupt, the state infested with drug addicts and their millions of contaminated needles, the state of open sewers with squatters everywhere, killing citizens…illegal aliens…they are now on a rampage and have a long list of people to eliminate from the internet starting with Trump who they shadow ban over and over again.  Arrest them all!  They are TRAITORS.