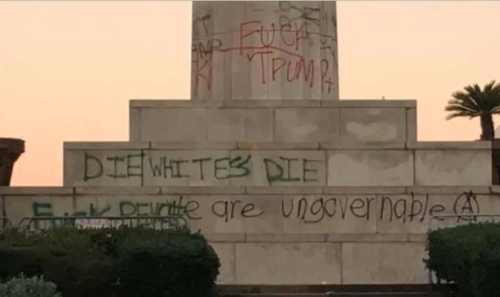 The memorial in Charlottesville was vandalized by ANTIFA gangs who were imported to fight the right wing that rallied there.  This is a total breakdown in law and order.  The media and the power people are demanding that everyone stand down while ANTIFA be allowed to run rampant.  Preventing ALL demonstrations is OK to keep law and order.  But this isn’t what is happening.  The ANTIFA get to run riot while if they get hurt or killed, they act as if they are not agents of their own messes. That is, they are violent and people encountering them become very violent, too.

END_OF_DOCUMENT_TOKEN_TO_BE_REPLACED

Both GOP And DNC Unite In Congress To Kill Alternative Media

Sep 25, 2013 … Congress Moves To Outlaw the Alternative Media … During her tenure, Feinstein voted for appropriations worth billions of dollars to her …

15 hours ago … The U.S. Congress is very quietly moving to advance legislation that will …Treacherous Congress Quietly Moving to Eradicate Alternative Media … Intelligence authorization bills rarely fail to pass when brought up for votes.

4 hours ago … … it is an opportune time to eradicate the alternative media once and for all. … quietly moving through Congress that would create a totalitarian… … Intelligenceauthorization bills rarely fail to pass when brought up for votes.

Sep 26, 2013 … The alternative media is having a dramatic impact on the worldview of … During her tenure, Feinstein voted for appropriations worth billions of …

Article: Treacherous Congress Quietly Moving to Eradicate Alternative Media | OpEdNews: BOTH PARTIES are doing this thing, all of Congress:

END_OF_DOCUMENT_TOKEN_TO_BE_REPLACED

Salon Article Attacking Conservatives For Being Heartless: Look In The Mirror And See The Heartless Leftists

Salon is complaining bitterly that the GOP is trying to pull out Federal Funds (taxpayer money) from ‘research’ in the sociology departments in places like Berkeley, due to anger on the right about various ‘studies’ that claim conservatives are stupid and evil while liberals are kindly and loving.  This ‘research’ is very bogus since both left and right are exceedingly intolerant of anyone refusing to obey their various dictates.  The blood baths created by both the left and right in history is gigantic, many, many millions and millions of humans are sacrificed on the altar of ‘political correctness’.  Here is the Salon story which is an interview with an academic, professor Jost. The right has f***ked up minds: Meet the researcher who terrifies GOP Congress – Salon.com

END_OF_DOCUMENT_TOKEN_TO_BE_REPLACED

Japan government continues to deny responsibility for sex slavery as the fascist Abe regime terrorizes anyone who talks about past WWII aggressions.  This is the same week Europe is holding a celebration of the freeing the last survivors of Nazi extermination efforts in Poland…by not inviting Russia to the party even though Russian soldiers were the liberators.  Meanwhile, in Japan, denial of WWII crimes is climbing fast with the US snoozing over this, refusing to punish the Japanese leaders.

I was thoroughly disgusted when the Asahi Simbun news people retracted all mention of ‘comfort women’ WWII crimes.  This caused both China and both Koreas to issue formal complaints which Japan ignored totally.  Now, More than 8,700 people sue Asahi Shimbun over ‘comfort women’ stories ‹ Japan Today: Japan News and Discussion:

END_OF_DOCUMENT_TOKEN_TO_BE_REPLACED

International News About Fascism, France, UK, Russia, Japan, India, Israel And Of Course, The US

Russian politician covered her in oil and feathers by masked men video shows exactly how our ‘allies’ in the coup Kiev half of Ukraine behave.  Sort of like Israelis, no?  The US is going to punish the Palestinians for doing something nasty while never lifting a finger when Jews do nasty stuff and the same rule of ‘whips for Orthodox Russians and powder puffs for US sponsored fascists’ continues.  Meanwhile, the EU economies are falling like a souffle exposed to the Arctic blasts we see hitting Buffalo, NY this week.

END_OF_DOCUMENT_TOKEN_TO_BE_REPLACED

EU And US Media/Diplomats Lie About Putin At G20 Meeting

The lies flow endlessly.  Putin is target #1 of many lies and propaganda stories this year. I strongly suspect this is due to him protecting Snowden.  Every single thing Putin does is put under this warped microscope while others get to do as they please, particularly Obama.  The Chinese leaders get pretty much the same treatment.  Undiplomatic gestures and words are aimed at both while childish diplomats think they are very clever doing this.  The price we pay is severe: all other G20 nations also have trade surpluses with the US so they let us be the baby at the banquet.

END_OF_DOCUMENT_TOKEN_TO_BE_REPLACED

Obama At G20 Summit Makes A Fool Of Himself 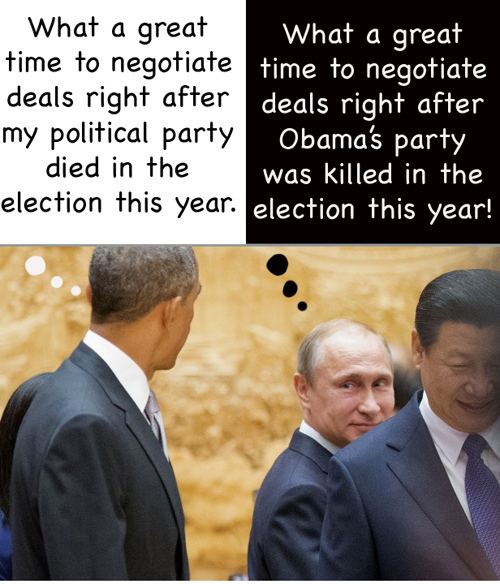 ‘World’s only superpower’ pledges ‘ironclad commitment’ to Asia Pacific at G20 summit  that is, he is going to do whatever Abe of Japan wants.  Abe has become thoroughly obnoxious towards the US.  Latest scam=deliberately weakening the yen so Japan and run bigger trade surpluses with the US.  I have a long, long memory.  Four Presidents pushed Japan to open markets and not deliberately weaken the yen.  It was a huge part of all negotiations.  Now, it has vanished.  Meanwhile, all this is driving China into Russia’s arms which is why Putin is smirking at Obama.