Protesters clash with police after “free speech” rally in Boston – YouTube CBS news has to lie about simple matters as per usual.

The obnoxious leftists in Boston scared off people like me who wanted to protest Google destroying free speech. 30,000 leftists showed up and when they saw no one else to beat up or terrorize, decided to terrorize the cops instead. So there was a riot. The ‘peaceful’ march wasn’t peaceful at all.

END_OF_DOCUMENT_TOKEN_TO_BE_REPLACED 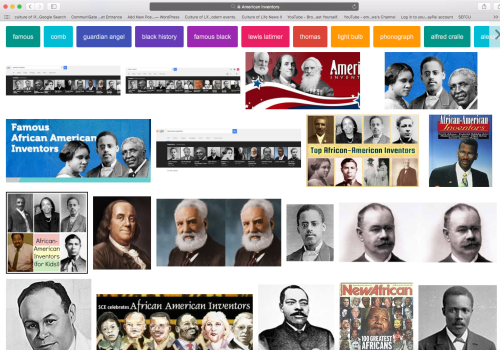 The entire page is virtually all black ‘inventors’.

I was reading the comments to this story (I love to do this!) and one of the readers proposed that everyone google common words to see how google is screwing up everything now.  One reader googled ‘American Inventors’ and remarked in amazement that it showed 90% ONLY black ‘inventors’, most of whom are very obscure.  Indeed, it showed only two non blacks: Benjamin Franklin and Thomas Edison.  My grandaddy was named after Mr. Edison who thought it was funny that my grandfather’s first name was his last name, they knew each other back in the 19th century.

END_OF_DOCUMENT_TOKEN_TO_BE_REPLACED

A typical Portland, Oregon town hall meeting riot from last October.  They are doing this every meeting now as the leftists try to impose their rule via attacking citizens and slightly less leftist representatives who win elections.  These radicals are now doubly pissed off that the US voters didn’t go totally leftist.  They also have an agenda which is strangely very similar to the Bilderberg gang’s agenda.  The movement of the left towards the ruling elite’s desires is due to them being coddled and funded by rich internationalists like Soros.

END_OF_DOCUMENT_TOKEN_TO_BE_REPLACED

We just had this election and the new President took over and all the stuff hidden from view by ‘mainstream media’ is suddenly front page news with this twist: everything festering for years is now being blamed on Trump after one month in office.  Amazing.  The left continues to protest everything and censor whatever they can and this is causing people to slowly back off from leftists as they get more and more unpopular.

END_OF_DOCUMENT_TOKEN_TO_BE_REPLACED

Violent Scuffles Cause Chicago Rally for Trump to Be Canceled as violent leftists attack a legal political rally.  Now, leftists think they can dominate via violence and obscene screaming but instead, the bulk of Americans see this illegal behavior for what it is: thugs, neo-Maoist suppression of political opposition.  The right is seething with rage now when these stupid students prevented a legal, non-violent political rally.  More than one rally for Trump has been disrupted by leftists who think this is OK, instead of having rival rallies, why not attack people instead!  And then they whine that they are ejected. Well…the next rally will see Trump with a lot of strong arm guys protecting him!

END_OF_DOCUMENT_TOKEN_TO_BE_REPLACED

The US government backs down in Nevada when confronted by heavily armed white rural males unlike anyone else who, if armed, is hammered hard into the ground if they defy our government.  So it is in Ukraine: anyone against the elected government, going in armed to the teeth and besieging it and then taking over violently is perfectly fine if it is financed by our government but is evil if the people resisting a coup are doing it when the coup is US-sponsored.