Black Dallas DA Decides Criminals Can Steal Up To $750, No Arrests, No Fines

As Californians flee the huge mess they made in California, the mess spreads across the nation.  One hot spot for crazy leftist lunacy is in Texas: Dallas.  There, the new mayor is a black man who, like all similar mayors of cities run by blacks, has decided crime is OK and he now has given the green light to looting stores by announcing no one will be arrested if they steal less than $750 worth of goods.  This open invitation to looting stores has a very bad end, I witnessed this in NYC when Mayor Beame said that looting and burning the city during a blackout was OK and no one was going to jail for committing vast, hideous crimes leaving huge hunks of the city a pile of smoking ruins.

END_OF_DOCUMENT_TOKEN_TO_BE_REPLACED

NEWS: @CoryBooker said @realDonaldTrump is “trying to pit Americans against each other and make us less safe” by threatening to release undocumented immigrants from the border into sanctuary cities in an exclusive interview with moderator @margbrennan https://t.co/3DqCvXjMaA pic.twitter.com/y2vRStlcPr

HAHAHA…the DNC/Bilderberg gang conspiracy to make us laugh to death, the Joker in Trump has caused all these gangsters to suddenly do a total U-turn and denounce illegal aliens storming our borders!  Wow.  All Trump had to do was tell these creeps, anyone invading the USA while waving foreign flags, will be housed in DNC-districts as close as possible to homes of the ruling elites who are sponsoring and protecting this obvious hostile invasion.   Now, they all want closed borders.

END_OF_DOCUMENT_TOKEN_TO_BE_REPLACED

DNC Reps Ilhan Omar, Ocasio-Cortez ‘9/11 Was Some People Did Something’ 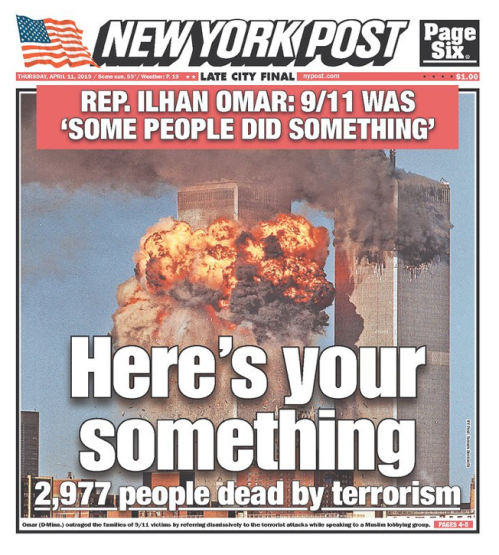 The insane alliance of the far left with radical Muslims who hate liberals is a poison fruit being devoured by deranged young people who think this alliance is great fun and games for them.  It is deadly serious for Muslims.  They think in terms of this 1,000 year war against ‘heathens’.  9/11 was a deliberate attack on the USA by radical Saudi and Egyptian Muslim men who wanted a religious war and this war was abused by the Bilderberg gang to attack ‘liberal’ Muslim leaders, not the Saudis, for example.

END_OF_DOCUMENT_TOKEN_TO_BE_REPLACED

NY Democrats were happily destroying NY City many years ago when SP Giuliani put a bunch of them in prison after tapping my phone…now they are back in power and destroying NY all over again:

Occasionally-Cortez celebrates her victory in helping drive away 25,000 jobs for Queens, NY.  The entire DNC is now focused on destroying civilization once again.  I lived through this hell way back in the 1970’s and it took brute force in the shape of the Special Prosecutor going in and arresting a host of DNC crooks to save the city from destructive DNC policies that bankrupted NYC.  Now, we are going rapidly back into this same hell hole again!  Imagine that.

END_OF_DOCUMENT_TOKEN_TO_BE_REPLACED

Some of the most racist commentary in the last 70 years poured out of ‘liberal’ news corporations which support Hillary and the DNC gang.  The inability to see themselves in the mirror reminds me of vampires who can’t do this, either.  The DNC rage over Trump poaching former black ‘slaves’ who only supported DNC gang members, is Titanic and very funny.  Meanwhile, Hollywood stars continue to plunge off the social cliff by openly and repeatedly attacking President Trump and ALL men, demanding Weinstein be put in prison for having consensual sex with prostitute actresses who thought this would…and it did…work to give them a jump on women who were not prostitutes.

END_OF_DOCUMENT_TOKEN_TO_BE_REPLACED

A youngish man working for the DNC Senators has been arrested by the FBI for doxxing top GOP leaders by releasing their private information so that crazy leftist violent female protestors and ANTIFA could attack them at home.  Senator Jackson Lee should resign in disgrace.  She is a black politician from Texas.  NO surprise that she thinks her staff is above the law and can do as they please.  The terror campaign run by the DNC bosses is blowing up in their faces.  One black politician in DC from California has been openly calling for blacks and leftists to physically attack anyone who works for the GOP or are the GOP even at home, even to the point of harming their families, too.

END_OF_DOCUMENT_TOKEN_TO_BE_REPLACED

Senator Harris and Senator Feinstein should both be charged and impeached and kicked out of Congress and put in prison for lying and enabling conspirators to lie about Kavanaugh.  This obvious fake letter should have been handed to the FBI.  So far, it took hard arm twisting just to see the contents of the letter sent by the other faker, Ford.  Repeatedly running to the press to press charges from anonymous California Democrat females is illicit, it is a form of terrorism, it is crying ‘fire’ in a theater when there is no fire, it is illegal.  They, these California Senators, are deliberately defaming a public official of the courts in order to destroy him so he won’t rule against things they support politically.  This is a crime.