The Bilderberg media giants and the entire leftist regimes are united in worrying about how we are all going to die unless we stop using fuels and freeze to death for them.  That is, to ‘save the planet’ humans who are not super rich are to live without fossil fuels.  No assists in this regime, as the people of France learned last fall, we are to simply live with being very cold and uncomfortable like during the Little Ice Age.

END_OF_DOCUMENT_TOKEN_TO_BE_REPLACED 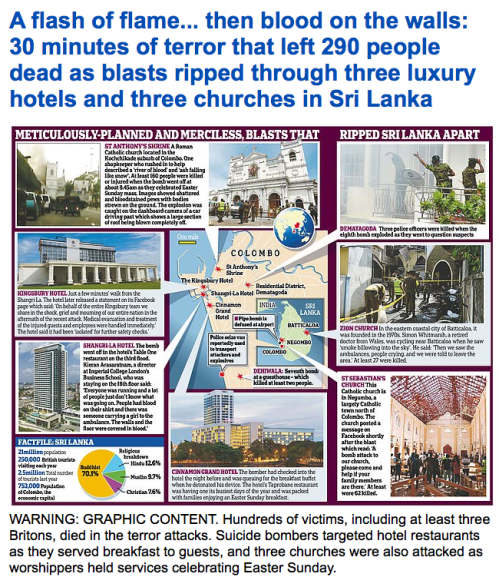 Sunday’s massive terror attacks against Christians and visitors to Sri Lanka come right on the heels of the Easter Week French Notre Dame Cathedral fire which makes that event very suspicious now.  Religious warfare has raged for eons on this planet and continues to this very hour.  Meanwhile, our Bilderberg gang media systems can’t seem to get very angry about Muslim attacks.  This is in stark contrast to their contortions of rage when anyone attacks innocent Muslims.

END_OF_DOCUMENT_TOKEN_TO_BE_REPLACED

DNC Reps Ilhan Omar, Ocasio-Cortez ‘9/11 Was Some People Did Something’

The insane alliance of the far left with radical Muslims who hate liberals is a poison fruit being devoured by deranged young people who think this alliance is great fun and games for them.  It is deadly serious for Muslims.  They think in terms of this 1,000 year war against ‘heathens’.  9/11 was a deliberate attack on the USA by radical Saudi and Egyptian Muslim men who wanted a religious war and this war was abused by the Bilderberg gang to attack ‘liberal’ Muslim leaders, not the Saudis, for example.

END_OF_DOCUMENT_TOKEN_TO_BE_REPLACED

African Bus Driver In Italy Kidnaps 51 Students, Tries To Torch Them To Death

Video appears to show African migrants hijacking a schoolbus in Italy as children flee screaming. The bus was set on fire after pic.twitter.com/PJyPASHJFK

THIS DIDN’T MAKE HARDLY ANY NEWS IN EUROPE OR US!!!  This is insanity.  A crazy white man kills some Muslims and everyone jumps to condemn this and howl about it and demand all white males be punished for this and just a few dozen hours later, a crazed Muslim radical bus driver in Italy tries to murder and incinerate the same number of CHILDREN as the Muslims slain in New Zealand!  And I hardly found any news about this in any Bilderberg media.

END_OF_DOCUMENT_TOKEN_TO_BE_REPLACED

Why did CNN cut her off after she destroyed their Islamophobia hoax? pic.twitter.com/zYepQbVqn8

The Bilderberg gang continues censoring everyone who disputes their New World Order which is to flood all countries except for Israel with aliens hostile to the countries they are invading.  This is why open terrorists are attacking NATO countries from within, this is why news about open ethnic and religious cleansing by Muslims is totally concealed by news media and politicians while anyone debating the wisdom of importing a religious sect that openly talks about ‘killing infidels’ is silenced?  Yes.

END_OF_DOCUMENT_TOKEN_TO_BE_REPLACED

Yet Another British Soldier Attacked By Muslim Mob Inside England

Tommy Robinson, as per usual, is not only talking about this attack but raising money for the soldier!

Another British soldier was attacked by a mob of Muslim terrorists and as per usual, the Rulers of England who are traitors try to bury the news, lie about the event, refuse to investigate or talk to witnesses and in general, side with the invaders of Europe, the Muslims.  Well, this is going to end very violently, there is no escaping this violence, it is built into the system, the Muslims intend to take over and if the surrender isn’t peaceful, they will and have already been doing this a long time, kill and terrorize until surrender.

END_OF_DOCUMENT_TOKEN_TO_BE_REPLACED

Once again, as always, Russian news shows exactly what is happening with no filters in France as the uprising against Macron continues to grow, demands he resign in disgrace.  But will this hand power to Le Pen who was cheated in the last election?  Nope.  This entire revolt began due to citizens rising up against New World Order Bilderberg gang demands that the French pay a ‘global warming’ tax to equatorial nations.  Note how cold it is this last month in Paris!