Trump has done the impossible: he has traveled directly from Saudi Arabia to Israel, a first.  This is huge, my family has lots of past relations with the Saudis and I know how big a deal this is.  Trump has split the Jews and Muslims who are conservatives from the DNC and Hillary with this historic visit.  No longer will both be united against him.  He won’t be impeached, etc.

END_OF_DOCUMENT_TOKEN_TO_BE_REPLACED

Netanyahu Decides To Be Trump And Putin Buddy All Sudden 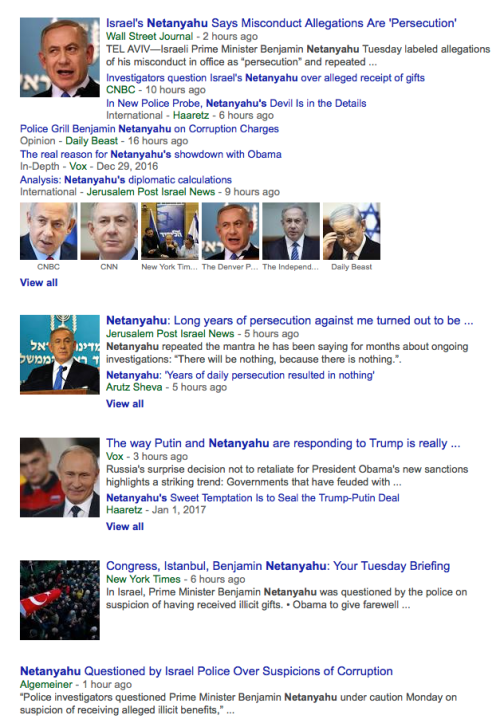 Netanyahu’s sweet temptation is to seal the Trump-Putin deal – Israel News – Haaretz.com reports.  Despite a great deal of our national media being owned and run by Jewish people, little news from Israel leaks into US media. Benjamin Netanyahu Questioned in Israel Graft Inquiry – The New York Times did let this bleed into the back pages.  It most certainly was not on the front page.  The main front pages did have the Trump/Putin deal which is interesting to examine for it shows some strange quirks in how our Real Rulers operate when forced to think ‘outside the box’.

END_OF_DOCUMENT_TOKEN_TO_BE_REPLACED

Just in the news today:  Benjamin Netanyahu faces ‘criminal investigation’ over fraud and bribery claims.  Israeli politics are brutal.  This will lead to some level of chaos with the rulers there and will bleed into US politics because one of the top rulers of the US is…Netanyahu.  His recent temper tantrum about the UN vote showed his true powers here: as Obama exits the White House, he whacked our Real Ruler in the shins and Netanyahu is hopping mad about this!

END_OF_DOCUMENT_TOKEN_TO_BE_REPLACED

A Very Long Kerry Speech In Israel: US Servants Of Zionists Grovel To Our Real Rulers

First, some real news from RT Russia that carries serious stories and not endless propaganda designed to drive the US public into one war after another:  US withdraws Aleppo proposals, says no consultations yet – Lavrov, the foreign minister for Russia explains how diplomacy is being stabbed in the back yet again by Peace Prize Obama and his gang of warmongers:

According to Lavrov, the Americans are currently working on an alternative plan for the city. He said the Wednesday consultations are canceled at this point.

“They have withdrawn their document and have a new one. Our initial impression is that this new document backtracks, and is an attempt to buy time for the militants, allow them to catch their breath and resupply,” Lavrov said.

The minister remarked that there would apparently be no serious discussion of the Syrian crisis with the administration of outgoing US President Barack Obama.

“The same thing happened with our agreement of September 9,” Lavrov explained. “The thing that the Americans offered on paper and what we backed is now somehow not OK for them. It’s difficult to understand who makes decisions there, but apparently there are plenty of those who want to undermine the authority and practical steps by John Kerry.”

US Secretary of State John Kerry has intensified contacts with his Russian counterpart after Republican candidate Donald Trump won the presidential election in November. According to reports in the US media, he is making last-ditch attempts to secure a place for rebel forces, which President Obama supported in Syria, in the future of the country.

END_OF_DOCUMENT_TOKEN_TO_BE_REPLACED

Netanyahu, Our Real President, Addresses Congress To Many Standing Ovations

Our real President, the guy who gets a near 100% of whatever he asks of Congress including lots of money and a religious war with a billion Muslims, came to his home base in DC to insult the puppet President with his diplomatic demands concerning Iran.  The Black Caucus Democrats all boycotted the ruler’s speech and didn’t do the obligatory jumping out of their seats repeatedly yelling, ‘Sieg Heil, Heil Israel!’ so they will probably be punished later by losing their seats in primaries in black neighborhoods who won’t understand how this system works in reality.

END_OF_DOCUMENT_TOKEN_TO_BE_REPLACED

The US Congress, both parties, are owned by rich Jews who bribe them via AIPAC.  Whatever Netanyahu wants, he gets.  Only this time, he bit off more than he could chew by going behind the backs of the Jews who run the Democrats in Congress.  Even so, few of these are going against him and for their ‘leader’ the puppet in the White House, Obama.

END_OF_DOCUMENT_TOKEN_TO_BE_REPLACED

Huge explosion at Donetsk chemical plant, military ‘don’t know what they hit’ (VIDEO) as NATO bombs rain down on Russian Ukrainian citizens who were upset about the coup in Kiev that put rank Catholic fascists who worship a WWII Nazi hero, in power.  This religious war is heating up greatly.  And will lead to WWIII because it involves EU leaders deliberately provoking Russia into war as if anyone in Western Europe will survive this looming war!