Today, while no American can board an airplane today without showing TSA employees a valid government-issued ID, the far-left screams “voter suppression” and brings lawyers affiliated with the Democratic Party to court to litigate every time efforts are made to pass voter ID laws.  We have a massive, gigantic illegal alien problem and the ‘fix’ the Real Rulers and their Fake Media giants have for this is…to tell us all to go to hell.

END_OF_DOCUMENT_TOKEN_TO_BE_REPLACED 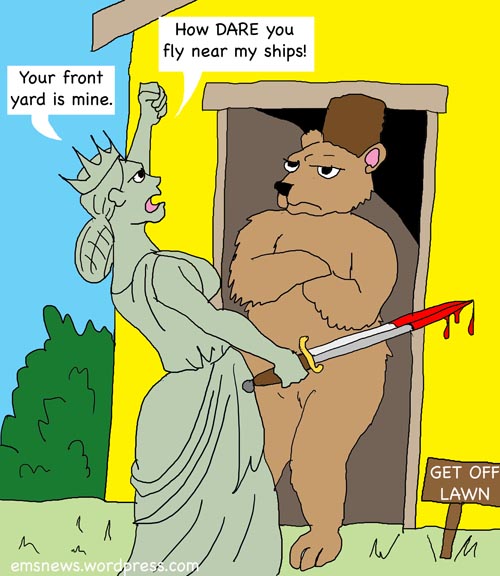 Russian Fighter Plane Buzzed US Warship in Black Sea: we started the Vietnam war after parking our navy right in the face of Hanoi and then falsely claiming Hanoi attacked our misplaced fleet.  We do this all the time.  Right now, we are parking major parts of our fleet in the front yards of China and Russia irritating both while we scream about them daring to sail ships or fly planes nearby.  This tactic is classic and highly provoking and note the US diplomats and media claim Russia has no right to protect Russian-speaking Ukrainians but we have the right to militarily and with the CIA, meddle deep into Ukraine for our own ends.

END_OF_DOCUMENT_TOKEN_TO_BE_REPLACED

Blowing Up DC: Budget Battle Rages While Bankers Call For Retirement Cuts For Workers So They Can Be Richer

Pentagon duped the nation for years with phony repatriation ceremonies where fallen soldiers were walked off planes that can’t even fly after sitting in a lab for months: The return of the remains of soldiers from past wars was faked for photo ops.  Under Bush and Cheney, all returning dead from their several wars against Muslims were returned to the US in secret.  It was illegal to photograph these corpses being returned.  They were not mentioned in the news, either.  No death counts for several years.  During the hiatus, the US media didn’t say nary a peep.

END_OF_DOCUMENT_TOKEN_TO_BE_REPLACED

Nearly 9 in 10 Americans displeased with Washington, poll says.  It is very strange watching America today.  Just last month for the entire month our media owners and all of Congress, our Puppet President and all were jerking wildly about as Netanyahu and the Saudi royals yanks their strings, all shouting in near unison that we had to go to war with Syria and Iran plus Japan’s demand we go to war with China.  Now, chaos reigns as our government literally collapses.  AP: ‘Unmistakable Sense Of Unease In Capitals Around The World As U.S. Government Looks Increasingly Befuddled’…because it isn’t functioning right. END_OF_DOCUMENT_TOKEN_TO_BE_REPLACED