END_OF_DOCUMENT_TOKEN_TO_BE_REPLACED

More firms selling prime real estate to get cash in Tokyo as the electronic giants of Japan and others go bankrupt due to competition from South Korea and China destroy the once-mighty Japanese power houses like Sony and Sharp.  The Bank of Japan printing press has gone into high gear to flood the market with yen and thus weaken it so Japan can export more to the US and Europe and this, in turn, is causing…more real estate bubbles.  Even as corporations collapse due to the rising South Korea/China boycott of Japanese goods, a desperate Japan Prime Minister Abe says Tokyo 2020 will be ‘inspiring’ due to this ruinous, huge government spending spree. END_OF_DOCUMENT_TOKEN_TO_BE_REPLACED

The sequestration of our budget is causing huge waves of anxiety.  Global elite operations like the IMF want the US to continue flooding the world with dollars.  And of course, the issue of Zionism and how it resembles Naziism continues to cause the ethnic cleansers in Israel and their supporters in the US to get hysterical when anyone says this in public.  Turkey’s prime minister is the latest person to bring up the issue.  And will be punished. END_OF_DOCUMENT_TOKEN_TO_BE_REPLACED

The US gets yet another ‘Treasury Secretary’ but this is virtually a non-existent office, eaten away since 1912 until it is a mere ghost of itself.  It controls virtually nothing anymore and more often than not it has become the parking place for Wall Street offshore bankers who have systematically destroyed this once-important office.  Our own Founding Fathers considered the power of the Treasurer to be but just one step below the President.  Now, it is a ceremonial office for the people it was once designed to control, the Big Foreign Bankers. END_OF_DOCUMENT_TOKEN_TO_BE_REPLACED

Another sign the US dollar is in trouble:  Germany is demanding the Bank of NY which is a Federal Reserve entity, hand over half of the gold it has held for Germany since WWII.  Germany is, along with China, one of the few major countries with sovereign wealth and it is as of today, #1.  Not Japan nor China, it is Germany.  The Germans are still hitched to the euro but they fear it is doomed at this point in time so are quietly preparing the ground for the possibility their fellow sovereign wealth holders might switch suddenly to the gold standard which ruled international trade for hundreds of years, with one empire after another wearing the Gold Trade Crown and then giving it up through bankruptcy and war. END_OF_DOCUMENT_TOKEN_TO_BE_REPLACED

The Federal Reserve has completely changed its formative activities since the banking collapse. It is now the capital holding tank for international speculators and banks.  That is, it works not for us but for them all. The Fed is also hiding the dire condition of our government by openly ‘buying’ US government debt instead of selling it all to China and Japan.  This means our trade deficit which was floated on US government debt bonds bought with profits from mostly one way trade with the US is no longer happening.  This is a serious, serious hole in our fiscal bucket, by the way, now that both the government of Japan and China are using US trade dollars to buy up world resources with loans from their own central banks to help this along. END_OF_DOCUMENT_TOKEN_TO_BE_REPLACED 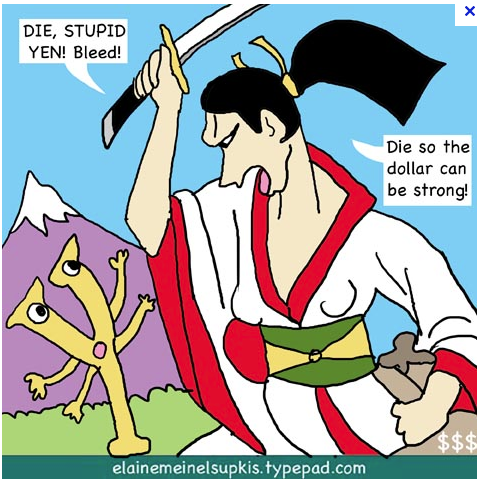 Treasury Won’t Mint Platinum Coin to Avoid Debt Ceiling because it was insane in the first place.  The truth of the matter is simple: if you are going to have a coup, do it.  If the President is unable to run the country due to Southerners, mainly, refusing to pass budgets, we either have a coup or we stop our wars suddenly and totally.  It is pretty simple.  But AIPAC wants the wars to continue and the rich want their tax cuts no matter what while the politicians use the excuse, ‘We have no money!’ to cut social services, the wars rage onwards, Pentagon spending continues to shoot upwards and the trade deficit continues to be ignored and our banking system with no capital continues to lend money they don’t really have…Krugman wants to fix this by imitating Japan.  And frankly, the GOP wants this, too.