DNC Race For President Is A Rat Race

Except for about a dozen ⁦@TulsiGabbard⁩ supporters, and a few for ⁦@AndrewYang⁩ and ⁦@JoeBiden⁩, the area in front of the #DemocraticDebate is pretty dead. Stark contrast to first night. #CNNDebate #Detroit pic.twitter.com/dUTBNBlQt0

The Detroit debate by DNC candidates attracted few humans but it seems to be rat paradise as the entire leadership of the DNC plus their buddies in mainstream Bilderberg media go insane with rage due to Trump pointing out the obvious: all DNC run cities including rich ones like San Francisco are overrun by huge numbers of rats.  Both two foot long and those that are six feet tall.

END_OF_DOCUMENT_TOKEN_TO_BE_REPLACED

All the polls show that Trump won again.  Meanwhile, the DNC is collapsing in Virginia as it turns out even more top politicians there loved making fun of them thar’ n…gers’ by putting on black face.  Or if they are black DNC, it is all about fun stuff like rape or beating the bitches.  Fun stuff, all around these days.  Oh, and killing babies: another fun pastime DNC gambit.

END_OF_DOCUMENT_TOKEN_TO_BE_REPLACED

Watching this discussion at Fox about ‘nationalism’ versus ‘internationalism’ shows how both sides of the debate at the top of our society frankly cannot understand basic history.  This is due to how history is taught mostly by Marxist professors.  WWI and WWII were not ‘nationalist’ wars, they were both gigantic imperialist wars.  Germany and Japan made it crystal clear, they were competing with the British, Russian and French empires, for example.

END_OF_DOCUMENT_TOKEN_TO_BE_REPLACED

Trump announced this last few minutes the arrest of the fake bomb terrorist and he was arrested and the FBI and others are well into the case and Trump is very happy announcing this arrest for he pushed hard for it to be investigated thoroughly.  The swift end to this terror is due to the President and the System working together now that more and more people are put in place to replace all the SJW-supporting DNC staff who were sabotaging Trump at the beginning. 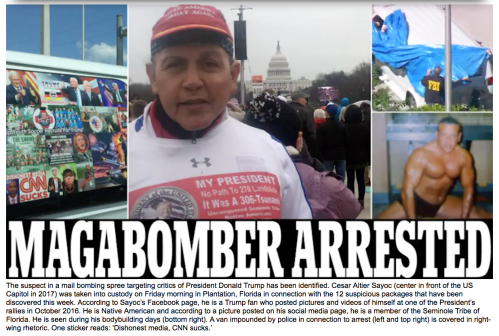 END_OF_DOCUMENT_TOKEN_TO_BE_REPLACED

The DOJ and FBI are openly defying the Presidential order to hand over ALL documents to CONGRESS.  DNC co-conspirators are demanding the FBI and DOJ refuse cooperation because it shows clearly how both hoped to create a legal coup.  Since this shows clearly the game plan of these traitors, they are now in a panic and trying to override the White House!  This is UNCONSTITUTIONAL.

END_OF_DOCUMENT_TOKEN_TO_BE_REPLACED

The London rag, the Daily Mail, sent a young emo male to tag after Tommy Robinson while on vacation and take pictures and write an attack article accusing Tommy of being an ‘Islamophobe’ and thus, should be in PRISON!  The Daily Mail allowed moderated comments on the articles about Tommy’s illicit arrest but now their articles attacking him have zero comments allowed.  The Daily Mail is now a turncoat newspaper which supports Muslim terror attacks, it appears.  Listen to this ‘reporter’ make excuses for the Islamic attacks, one of which happened just yesterday in London next to Parliament!

END_OF_DOCUMENT_TOKEN_TO_BE_REPLACED

BOOM! GIULIANI: “This Case Isn’t Going to Fizzle, It’s Going to BLOW UP ON THEM! There’s a LOT MORE to What They Did That Nobody Knows About Yet! “

The latest ‘trial of the century’ has all the liberals and the fake news organziations all in a tizzy.  Will this destroy Trump?  It looks more and more like it is a self-destructing mess and no wonder, it has absolutely nothing to do with the original Mueller investigation.  It is so out of the water, out of the loop, it is ridiculous and should be terminated.  Also in the news, Sessions is finally waking up from his snooze and discovered that SJW organizations are labeling everyone to the right of Madame Mao as ‘hate groups/hate speech.’  Calling on Alex Jones!  He is their #1 boogeyman in this crusade to crush all alternative opinions.