Brooklyn residents don’t appreciate Spike Lee’s rants on gentrification: Mr. Lee was allowed, due to being a Hollywood personality living in NYC, to perform a disgusting, very racist, obscene rant about fixing up neighborhoods that once declined into crime-riddled slums.  The two neighborhoods this upper East Side Manhattan Super Star criticized was two places I was very active in cleaning up and renovating.  That is, Park Slope and Fort Greene.  It wasn’t the house repairs that worked when I was operating there, it was my very proactive, arrest anyone street patrols we organized back in the 1970’s.  This was literal life and death.  My block, before the patrols began, had a monthly murder rate that was very high, three in one month the same month we decided, after blocking off the street with discarded couches, to change via being very, very active at night.  And it worked and this pissed off Sharpton and Lee no end and both attacked me, personally, for doing this because I was a white woman.

END_OF_DOCUMENT_TOKEN_TO_BE_REPLACED

World auto markets are in turmoil.  The NYT has an article about how Kia Motors from South Korea, is the only automaker to open a factory here in the last year. As per usual, this foreign company chooses a rural southern town and will have everyone work for hourly wages and no unions!  Yup.  Paradise.  Also, we get some pictures of the Chinese Shanghai Auto Show and I want to talk about the latest line-up of Chinese cars.  Lots of fun! END_OF_DOCUMENT_TOKEN_TO_BE_REPLACED

It is now official: the US auto industry is dead.  GM is definitely filing for bankruptcy.  This is why Rick Wagoner  was unilaterally fired by President Obama.  The decline and fall of the US industry has many strands.  One is, a refusal to look forwards in time.  Another is the need to get around the unions via outsourcing and offshoring.  The ultimate goal in all auto manufacturing is to move towards part-time workers who have little pay and live in dormitories and leave after working only a dozen years or so, on the line.

First, GM’s death: This will impact many things.  First, the sudden plunge in wages that are inevitable here will continue the collapse of rewards for working stiffs.  As they lose more and more in the game of ‘who gets the profits’, we will see the collapse of the US consumer.  That is, if the unions cease to exist and worker’s wages return to Victorian ratios of return on hours of labor compared to profits for the bond holders and bosses, we will get the same miseries of back then….including revolutionary desire for wrestling power from the money controllers.  Already, we see tiny hints of this.

Holding GM stocks meant total losses.  Of course, the retirement funds that did hold US manufacturing stocks, dumped all of them as time passed.  This is due to many forces. One of which is how much the US participated in ‘free trade’.  First, let’s look at GM’s graphs:

Below is the graph comparing GM to Toyota.  After 9/11, when we all swore to be patriotic Americans, the value of GM’s stocks compared to Japan’s Toyota fell, drastically and continually.  This is partially due to the rising price of oil.  When speculators drove up the price of oil commodities to an amazing peak of $140 to the barrel, the collection of gas-guzzling dinosaurs built by GM saw a catastrophic drop in sales.

These 17 or less mpg monster vehicles were once very profitable for GM.  But now, to move them means stripping the profits from the sales.  And so the stocks of GM fell like a rock.

Toyota sales also fell.  And fell faster than GM’s sales.  But since they started from a much, much higher point, they could take a steeper fall and still land on their feet due to being better capitalized.

THE US Department of the Treasury is directing General Motors to lay the groundwork for a bankruptcy filing by June 1, despite GM’s contention it could still reorganise outside court.

Members of President Barack Obama’s vehicle industry taskforce spent last week in talks with GM officials and its advisers. The talks are expected to continue this week.

The goal is to prepare for a fast, surgical bankruptcy, sources said at the weekend.

GM, which has been given $US13.4 billion ($A18.5 billion) in federal aid, insists a quick restructuring is necessary so its image and sales are not damaged permanently.

The groundwork is aimed at ensuring a GM bankruptcy filing is ready should it be unable to reach a deal with bondholders to exchange about $US28 billion in debt into equity in GM and with the United Automobile Workers union.

So, this is the end of the long road.  As the last of the American industries go under, we can’t laugh and say, ‘We can buy foreign cars!’  This is because this is all the prelude for the days when we can’t buy much of anything.  This is already the regime in Japan!

Japan’s auto industry, which ran neck to neck with the US, became much better capitalized via the simple action of stripping workers of all value.  Namely, the government of Japan, which is controlled by the manufacturing elites, changed the laws drastically during ‘reforms’.   They allowed the major industrialists to hire workers at ‘temporaries’ and keep them off the official books and make them not only disposable, but cheap!

These semi-slaves got to live in dormitories and work long hours with little compensation. When sales went down, they were dumped with not even unemployment insurance!  NOTHING!  Nothing!  And this is our ‘competition’: ruthless and cruel and using virtual slaves!

Over one third of Japan’s workforce is not ‘part-time’.  Poverty is growing, rapidly there.  The sales of cars in Japan has been collapsing for the last 15 years.  and the collapse is worsening EVEN AS JAPAN’S AUTOMAKERS GROW FASTER AND FASTER.  All of this growth is export-driven. 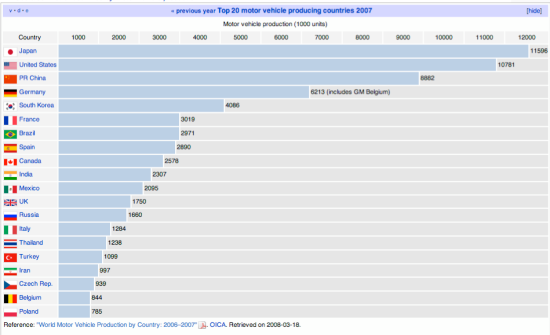 Japan is now the #1 automaker in the world.  The US is second and dropping, fast. China is charging in behind us and will supersede us in the next 5 years, easily.

Toyota and GM have been neck to neck now, for the last year.  But thanks to US free trade delusions, Toyota has a huge US market share and GM has nothing in Japan.  This is true with everyone doing business with Japan: it is strictly one-way when it comes to anything Japan is making.    The collapse of the concept of ‘free trade’ can be laid directly at Japan’s feet.  Not the US nor even China.  China exploits free trade but it isn’t one-way with most of the world.

Government’s Incentives Aim to Keep Buyers in the Fold – WSJ.com

Normally, auto makers establish an accounting reserve for each new vehicle they sell to cover expected warranty costs. Under a new program outlined by the Treasury Department, a separate account would be created, funded both by manufacturers’ money and government cash, to cover warranties if GM or Chrysler can’t….

Under various Senate and House proposals, the program would provide anywhere from $3,000 to $7,500 toward a better-mileage vehicle for shoppers trading in an eight-year old vehicle or a vehicle getting 18 miles a gallon or worse. Details are still being ironed out — a House bill, for instance, would forbid trade-ins for some fuel-efficient cars, such as Toyota Motor Corp.’s Prius hybrid.

The US has to examine our competition.  If they are using cheap labor, killing off their own citizens while using them as disposable tools, wrecking Japan’s future by making it impossible for the people to form families and have children, then we MUST stop this madness and say no to free trade!  The price of free trade is much too high!

SOCIALISM AND CAPITALISM: BOTH ARE IMPORTANT

EASY READING CULTURE OF LIFE NEWS:  SOCIALISM AND CAPITALISM: BOTH ARE IMPORTANT « Culture of Life News 2

The tensions between socialism and capitalism never, ever go away.  The ideal system is one that is balances the two.  I am a devotee of the concept of ‘Libra’.  This is where one recognizes reality and not view everything through ideological glasses.  We only see a mirror of reality which means, things are often backwards but then, we see things literally through prisms in our eyes which sees the world upside down and then, our brains have to reverse things to look ‘normal’.  Ie: real.  The debate about socialism vs capitalism must be conducted with an eye to history, facts and real effects on systems.  NO SYSTEM SURVIVES FOREVER.  Please remember this salient point! END_OF_DOCUMENT_TOKEN_TO_BE_REPLACED

As worldwide car sales drop like a rock, interesting things are now showing up in the statistics.  It is not what you are but where you stand, relative to others.  This month, China just passed a new road sign: more cars were sold in China than in the US.  This is very important: we no longer control world consumer markets.  It is moving East.  Japan refused to be a world market and looked only to enrich the top 10% so Japanese car sales have been declining for a decade or more.  But with the massive Chinese population indulging in this, it means the fall of world oil prices will cease and the US will begin seriously competing with the Chinese for gasoline. END_OF_DOCUMENT_TOKEN_TO_BE_REPLACED

The people at the very heart of this utter implosion of the US economic system are still very much in power.  The slight shifting of the guard means nearly nothing will change.  This is because everyone wants the previous status quo to return.  This is why the bail outs of banks and industry do not include nationalizing both and then setting up tariffs and barriers to protect both.  Instead of closely examining all the factors at work here, the rescue parties all focus on one thing: propping up what was going on before.  And this leads to the complete and utter destruction of the American Empire. END_OF_DOCUMENT_TOKEN_TO_BE_REPLACED

GOP CONSPIRES WITH TOYOTA TO KILL US AUTO INDUSTRY

Treason runs amok in DC.  The insidious way our dire trade rivals operate, using or own elected officials, never ceases to astonish me.  Treason pays most handsomely!  In this case, the GOP southern Senators are all playing interference with Toyota’s blessings.  They are working hard to kill the US auto industry.  Time to look deeper into this matter.  Letting trade rivals not only infiltrate our native markets but then, open factories here and then undermine laws and systems supporting native industries: this is treason.  Of the worst kind.