Congress decided to destroy women’s sports utterly and totally.  The era of ‘women’s sports’ has been historically extremely short.  It began when feminists of the late 19th century demanded this, my own grandmother, Hanna Pettit, being one who made the news back then, 100 years later, our 21st century feminists stabbed it good and dead yesterday.  RIP, women’s sports.  It is now officially dead.

END_OF_DOCUMENT_TOKEN_TO_BE_REPLACED

Mass Marchers All Over Europe, Anti-Trumpers Wail Like Babies

Big demonstration in Toulouse which was violently broken up by armed authorities while in Paris, marchers were kept away from Arc de Triomphe by military forces.  Macron is still fighting citizens of France on behalf of his internationalist buddies who want to be outlaws inside countries they loot or destroy.  Meanwhile, Muslim terrorists are arrested in Germany and immigrants in England demonstrate for no borders so they can continue to invade.

END_OF_DOCUMENT_TOKEN_TO_BE_REPLACED

Macron decided to double down today and crush the Yellow Vest protests once and forever.  I was in France in 1968 when De Gaulle did this, too, with army tanks, no less.  I saw them with my own eyes!  The uprising of the youths spread globally and I rode that wave all the way down.  This isn’t a student revolt: this is a far, far more dangerous WORKERS revolt.  Thus, it won’t be stopped so very easily.

END_OF_DOCUMENT_TOKEN_TO_BE_REPLACED

The ridiculous Russia collusion investigation will soon break…showing how Obama’s guys did all this junk plus tried to pin their perfidy onto Trump.  So, my cousin Steele was paid by Clintons, Bruce Ohr, a Clinton crony, the DNC, a RUSSIAN OLIGARCH who was pissed off at Manafort due to a failed business deal…and the FBI top dogs who all were in a conspiracy to overturn the election after Trump won unexpectedly.  Also today: the Yellow Vest protests in Paris double in size.  Left/right alliance now to topple Macron.

END_OF_DOCUMENT_TOKEN_TO_BE_REPLACED 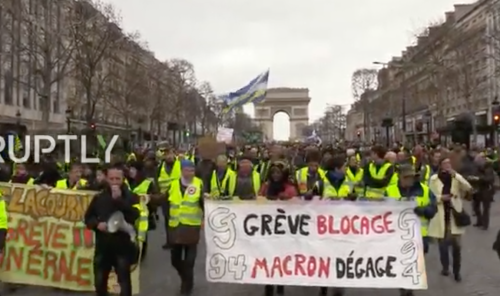 The French Yellow Vest movement continues!  It is also kept out of mainstream news, nearly totally now.  As usual, I am posting the live videos which come from Russia since the EU and US and other ‘free’ countries hide this important news from the rest of us lest we, too, become Yellow Vests.

END_OF_DOCUMENT_TOKEN_TO_BE_REPLACED

The French Yellow Vest protestors show up yet again, in utter defiance of Macron and the EU overlords.  This is one of the least reported stories of the last 50 years.  Utterly hidden from the US public, for example.  Not even ‘alternative’ news is carrying this story consistently.   I have been increasingly interested in it due to the longevity and the radicalization of the marchers as they are repeatedly attacked by the State.  It is huge news and nearly totally hidden.  The next door BBC gang utterly avoids any news about what is happening in France, for example.