This video is Podesta talking about last night’s news story, the Weiner FBI investigation and Hillary’s crimes.  Immediately, as a huge crowd behind him yell about all this, he starts talking about Putin and Russia and blaming them for the Hillary/Podesta corruption being revealed and he gets hotter and hotter on this issue doing the classic ‘Red smear’ stuff straight out of McCarthy’s playbook.  This criminal wants to start WWIII with Russia to cover up his own domestic crimes!

Comments at this video: 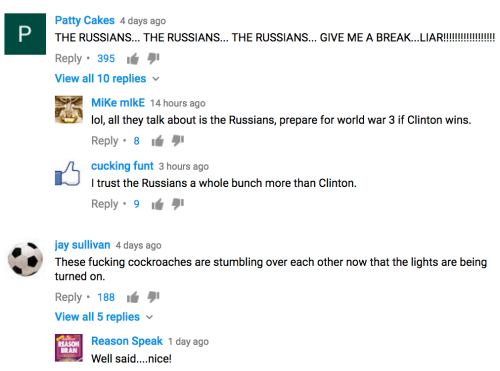 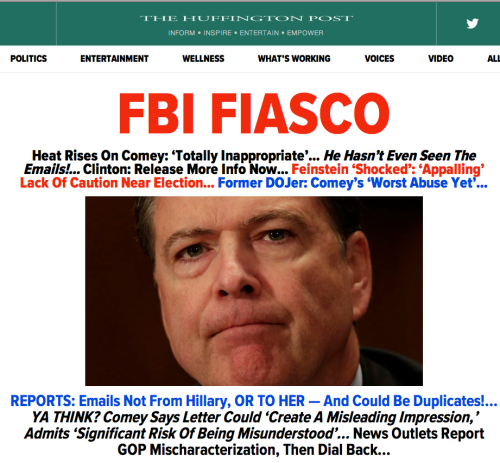 Breaking News and Opinion on The Huffington Post proves that the liberals love criminals and will do anything to stop prosecutors from preventing crimes.

And there is more this week:  Julian ASSANGE The next leak will lead to the arrest of Hillary CLINTON – YouTube

Republicans renew calls for Clinton to be denied security briefings after the DNC did this to Trump and it was totally illegal for them to do this to him.  Meanwhile, it is quite legal to do this to Hillary because of her past mishandling of information and attempts at a coverup.

In a May interview with FBI agents, an executive with the Denver contractor that maintained Clinton’s private server revealed that an underling didn’t bleach-clean all her subpoenaed emails, just ones he stored in a data file he used to transfer the emails from the server to Clinton’s aides, who in turn sorted them for delivery to Congress.

The Platte River Networks executive, whose name was redacted from the interview report, said PRN tech Paul Combetta “created a ‘vehicle’ to transfer email files from the live mailboxes of [Clinton Executive Services Corp.] email accounts [and] then later used BleachBit software to shred the ‘vehicle,’ but the email content still existed in the live email accounts.”

And this is why the FBI, with many agents furious about how the case was handled by top DNC operatives there, wanted the case reopened and now the treasure trove of filth from Weiner, husband of Hillary’s top aide de camp, has oped the spigot to an ocean of crimes.

The mess in DC was supposed to be a mountain out of a mole hill as far as the US media giants were concerned.  But that mole hill grew bigger and bigger as more manure was added until it really was becoming a true mountain so the media giants and the DNC conspired with Obama and Hillary to bury the mountain of sh•t.

Judge Napolitano: What happened to the FBI? It’s been corrupted by Obama and his team | Fox News

The FBI began investigating the Clinton email scandal in the spring of 2015, when The New York Times revealed Clinton’s use of a private email address for her official governmental work and the fact that she did not preserve the emails on State Department servers, contrary to federal law. After an initial collection of evidence and a round of interviews, agents and senior managers gathered in the summer of 2015 to discuss how to proceed. It was obvious to all that a prima-facie case could be made for espionage, theft of government property and obstruction of justice charges. The consensus was to proceed with a formal criminal investigation.

The assumption was, Hillary did this to hide crimes.  And it turns out according to the Wikileaks releases that this fear she was committing crimes was !00% correct.  The only issue left is, exactly what crimes did she commit and who helped her?  And this leads straight to the heart of who runs the DNC and the White House itself.

Already, the head of the DNC during the convention had to resign due to her illicit works.  The US media screamed about Trump touching women while ignoring VP Biden doing worse with little girls while they were inside the Congress building in DC itself!  All this stupid sex stuff was unevenly reported by the media who is in cahoots with Clinton crimes.

Six months later, the senior FBI agent in charge of that investigation resigned from the case and retired from the FBI because he felt the case was going “sideways”; that’s law enforcement jargon for “nowhere by design.” John Giacalone had been the chief of the New York City, Philadelphia and Washington, D.C., field offices of the FBI and, at the time of his “sideways” comment, was the chief of the FBI National Security Branch.

The reason for the “sideways” comment must have been Giacalone’s realization that DOJ and FBI senior management had decided that the investigation would not work in tandem with a federal grand jury. That is nearly fatal to any government criminal case. In criminal cases, the FBI and the DOJ cannot issue subpoenas for testimony or for tangible things; only grand juries can.

This is the infamous ‘cover up’ at work.  Nixon supposedly taught us all about this and Watergate was supposed to stop this but look at today when corruption reigns in our elections and money flows in from overseas to corrupt candidates lying about their intentions to voters.

Did President Obama fear being a defense witness at Hillary Clinton’s criminal trial? Did he so fear being succeeded in office by Donald Trump that he ordered the FBI to exonerate Clinton, the rule of law be damned? Did the FBI lose its reputation for fidelity to law, bravery under stress and integrity at all times?

The real question here is, what did Obama do that was highly illegal?  We now know that he used a fake name to call or text Clinton on her illegal servers and the only reason for him to do this is, they were doing something explosively illegal.  We are near the end of this business, the following mess can’t be avoided even if, like President Ford, everyone is pardoned so there are no trials!  That stunk to high heaven back then and stinks today.