Democratic Party Protesters Take to the Streets to Call for Abolishing Our Borders.  The entire DNC has doubled down on courting the illegal alien illegal voters.  They want to eliminate all systems used to control our borders.  This is pure treason.  It is also very infuriating.  Also, an infamous Communist commune school on the West Side of Manhattan founded over 50 years ago, now is the exclusive home of super rich celebrities and their various pets.  It costs $45,000 a year for indoctrination lessons.  And the parents voted 87% to SEGREGATE the bulk of the day there by race, removing the black children from white children!  Oroboros is the snake tht eats its own tail here.

END_OF_DOCUMENT_TOKEN_TO_BE_REPLACED

Arrest Clapper.  Clap the irons on his legs and hands.  Throw the book at Clapper.  Details of the conspiracy to frame the President of the USA based on foreign false charges means arresting all the players who knew the truth and pushed lies.  This is a Constitutional Crisis due to the entire DNC and key Bilderberg GOP gangsters in Congress refusing to go after obvious criminals in the Obama administration.

END_OF_DOCUMENT_TOKEN_TO_BE_REPLACED

California State Senator Dr. Pan, an open communist, wants to control the entire internet and force everyone to consume only Pravda style news controlled by the Bilderberg gang.  This gang is demonizing Putin who is very anti-communist while using communist hit squads under the ANTIFA banner to intimidate and destroy all opposition to this New Maoism.  I have been against Maoists all my long life and directly tangled with Maoists inside China on several key events and won each time.  Now, they are resurgent again and out for blood.  Using sex to attack male politicians and others is one of their schemes, they hate sex.  Also using media control, they want to have only propaganda.

END_OF_DOCUMENT_TOKEN_TO_BE_REPLACED 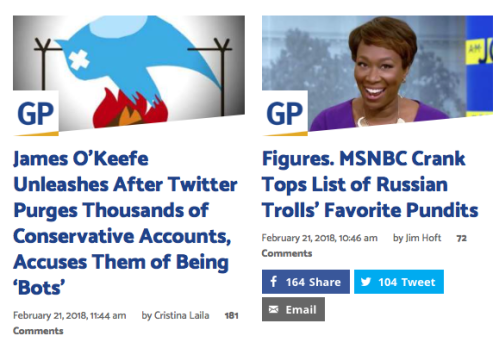 The Gateway Pundit has a number of articles of interest today.

The California liberal SJW cabal which runs significant parts of the Internet are at war with the rest of the citizens of our country.  One major tool in this war is to ban or prevent using Internet resources in various ways, all of which are the imposition of rules that are capriciously enforced.  Namely, if you are popular and you are not an SJW radical, you can be banned on the slightest causes.  On top of that we have these same lunatics running an anti-Russian campaign.  This is a Bilderberg operation put in place the minute patriotic Putin rose to power.  This predates Trump by a number of years.

END_OF_DOCUMENT_TOKEN_TO_BE_REPLACED

This has got to be the stupidest ‘news’ I have ever seen in my long life.  The USA government is heavily dominated by a gang of Bilderberg conspirators who meet internationally in deepest, protected by military forces, secrecy and they decide what they are going to do to the rest of us this way.  The ones from our own government conspiring to do this are TRAITORS and now they are mostly out of power thanks to US voters (and English/Austrian/Polish/Hungarian voters, too!).

END_OF_DOCUMENT_TOKEN_TO_BE_REPLACED

Philadephia is a DNC run city.  It has been one longer than even Detroit. It is a place that struggles to deal with crime and wants to attract people with money but at the same time, doesn’t want to make the kids angry who are criminals.  What we saw last night in Philly was a mob of black and white young people deliberately rioting, deliberately destroying property, deliberately looting stores, deliberately torching cars, overturning cars and deliberately being violent criminals and the cops arrested NO ONE.  Not one of these criminals.  And yes, all of them are criminals.