First, harsh reality: the vast majority of people who have a choice want to live where it is much warmer and specifically where there is oceans nearby that are supposed to drown everyone during the Global Warming Period that ended recently.  Even the Bilderberg ruler who owns the New York Times admits people are moving in greatest numbers to these very places the NYT claims will be destroyed by super hot weather and oceans rising:  The Giant Retirement Community That Explains Where Americans Are Moving – NYTimes.com

Add this all up, and what do the latest census population numbers tell us?

These longstanding, pre-crisis patterns for how Americans migrate exist for a reason: People want a combination of good weather, affordable housing and good job opportunities. And if a place combines those factors, people will come.

Nothing is more despicable to me than watching people whine about how hot and dry a desert is after they move there.  Duh.  California’s tiny drought has brought out Apocalyptic fears when this is one of the shortest, not longest droughts in the last 2,000 years since the Roman Warm Period.  Florida remains the happy home destination of huge numbers of retirees who want ‘GOOD weather’ which means hot weather.  And they go to Florida for the beaches and they know that Florida is barely above sea level and obviously this is no problem for them so why should I freeze to death and be forbidden the right to burn coal up here in the frigid north because of these guys???

END_OF_DOCUMENT_TOKEN_TO_BE_REPLACED

Correction: I had more information and the following story isn’t certain anymore.  What IS certain is that the pilot plotted his mass murder before hand.  Reasons for this are still a question.

The tangled mess about the pilot who did a mass murder/suicide attack appears to be political and religious in nature and I was correct to compare him to the 9/11 suicide attackers:  GERMAN NEWS REPORT: Co-Pilot of Germanwings Airbus Was MUSLIM CONVERT …’Hero of Islamic State’? | The Gateway Pundit

According to Michael Mannheimer, a writer for German PI-News, Germany now has its own 9/11, thanks to the convert to Islam, Andreas Lubitz.

All evidence indicates that the copilot of Airbus machine in his six-months break during his training as a pilot in Germanwings, converted to Islam and subsequently either by the order of “radical”, ie. devout Muslims , or received the order from the book of terror, the Quran, on his own accord decided to carry out this mass murder. As a radical mosque in Bremen is in the center of the investigation, in which the convert was staying often, it can be assumed that he – as Mohammed Atta, in the attack against New York – received his instructions directly from the immediate vicinity of the mosque.

Converts are the most important weapon of Islam. Because their resume do not suggests that they often are particularly violent Muslims. Thus Germany now has its own 9/11, but in a reduced form. And so it is clear that Islam is a terrorist organization that are in accordance with §129a of the Criminal Code to prohibit it and to investigate its followers. But nothing will happen. One can bet that the apologists (media, politics, “Islamic Scholars”) will agree to assign this an act of a “mentally unstable” man, and you can bet that now, once again the mantra of how supposedly peaceful Islam is will continue. And worse still, the attacks by the left against those who have always warned against Islam, will be angrier and merciless.

END_OF_DOCUMENT_TOKEN_TO_BE_REPLACED

Recently 7 Siblings Perish in NYC Home Fire, Officials Eye Hot Plate because the Hasidic Jewish family left it on because their rules are, no fires to be lit on the Sabbath.  The father was at ‘work’ which is praying in various synagogues when the fire happened.  His children were all transported home to Israel to be buried at great expense.  He and his family were on welfare in the US as are many other Hasid families who have learned how to exploit both Israel and US welfare systems so the men can avoid working legally (lots work under the table),

The families in first world countries that have the most children tend to be on welfare benefits.  More children=more money for them whereas middle class taxpaying families see a reduction in lifestyles if they have more than one or two children.  This has led to a general collapse in birth rates of middle class families while families unwilling or unable to support children have as many as possible.  If they are foreign, they bring in more family members to augment the family size and manipulate birth certificates, etc. to artificially enlarge their families.  They teach each other the tricks to do this and entire cultures now are based mainly on exploiting welfare systems and do this generation after generation.

END_OF_DOCUMENT_TOKEN_TO_BE_REPLACED

Death Metal: Suicidal Pilots And Cause Warmongering Nuts Ruling US To Start Wars

We just witnessed a horrific crash of a passenger plane in Europe and it took only a day to get the black boxes and find out all the information.  It was suicide/mass murder by a crazy pilot.  Meanwhile, the black boxes from the Ukraine shoot down of the Malaysian airliner, we have zero information from these black boxes and no final report at all.  Then there are all the mystery vanishing of mainly Malaysian jets flying over the Pacific Ocean.  Pilots have murdered hundreds of passengers in the past just like this week’s crash.

END_OF_DOCUMENT_TOKEN_TO_BE_REPLACED 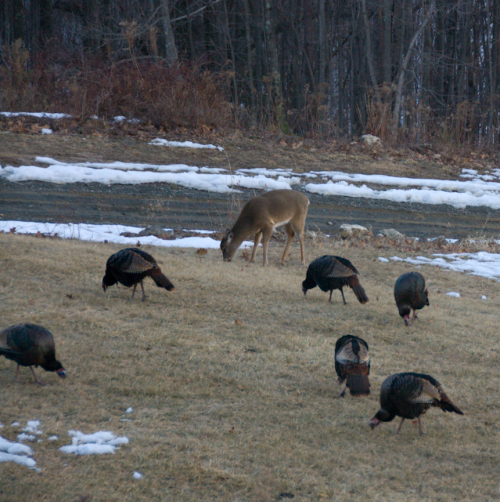 Deer and wild turkeys grazing on my fields this week.

Half of the US is warm and half has endured two Factory Cutbacks in February Held Back U.S. Growth due to severe cold, blizzards and other global cooling weather.  This super cold winter that assailed more than half of the North American continent has caused big economic problems.

The eastern U.S. saw below-normal temperatures from Atlanta to New York in February and record snowfalls in New England. The National Oceanic and Atmospheric Administration’s data showed February was the snowiest month on record for Boston, while Chicago, Buffalo and Cleveland had their coldest February on record.

END_OF_DOCUMENT_TOKEN_TO_BE_REPLACED

ISIS ‘Reign of Terror’: Children Beheaded, Crucified, Buried Alive …One hundred years before the Macedonian general, Alexander the Great crushed Greece, and three hundred years before Rome turned the Greek great thinkers and people into slaves, the Athenians who are greatly admired for their ‘democracy’ and culture were actually on the rampage, raping, murdering, stealing and abusing everyone else even fellow Greeks, no less, in brutal materialistic wars.  Think the ISIS and other Islamic warriors are nasty?  No nastier than the cultivated, intelligent ancient Athenians.

END_OF_DOCUMENT_TOKEN_TO_BE_REPLACED

No More Nuclear Fuel In Core Of Fukushima Reactor #1

New images show all melted fuel is “gone” from Fukushima reactor — Experts: Molten core may have reached outer environment, can’t tell if fuel is still contained — Official: “We presume fuel still in containment vessel… but we need to check one day”  sometime in the far, far future which will probably never come.

The global warmists have been quite loudly proclaiming that saving us from a warmer climate means using mainly nuclear power.  They don’t say this all too loudly because of the catastrophes in Ukraine and Japan.  So they talk about solar/wind energy which is supplemental, not useful in the long run.