Another revolt in Europe: the entire EU is ripping apart at the seams at the same time the Bilderberg gang is desperately trying to openly loot England because voters chose to leave that evil empire operation.  Catalonians were crushed last year by the Bilderberg gang, the leaders arrested and tortured.  But once again, the People rise up to fight back taking heart from the French and Belgium freedom fighters, the Yellow Vest movement is growing ever greater!

END_OF_DOCUMENT_TOKEN_TO_BE_REPLACED 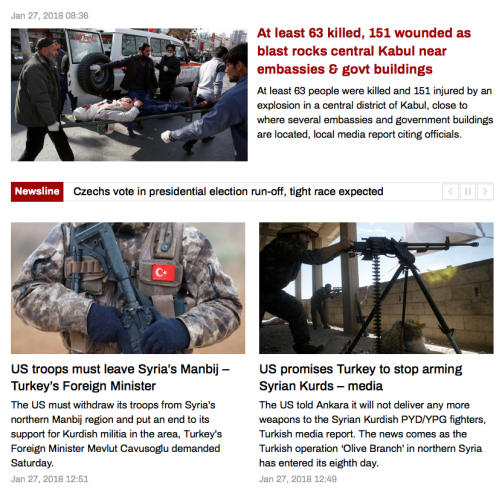 World news — RT International: I go to foreign news all the time because US news systems have deteriorated badly in the last several years.  It is downright sad, looking at the New York Times, how deranged they have become due to Trump Derangement Syndrome.  The twin evils of the liberals are ‘global warming’ and anything Trump does, good or bad.  Well, the wars launched by Bush Jr., Obama and Hillary Clinton roar onwards and rarely makes the headlines in liberal media except whenever blame for some action can be laid on Trump.  Worse, these papers push hard for bad relations with Russia which cause endless diplomatic chaos that is utterly unnecessary.  But it keeps the liberals happy, aping McCarthy nonstop now.

END_OF_DOCUMENT_TOKEN_TO_BE_REPLACED

Trump Surrenders To Bilderberg Gang: Will Double Down On Afghan War Folly 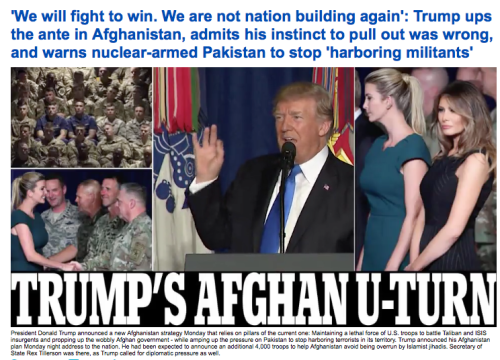 The mainstream fake news, the DNC Democrats and the GOP Bilderberg gangsters have finally defeated Trump and above all, the many US soldiers on the front lines who voted for him because he wanted to stop all the many futile, dangerous and ill-concieved wars…Trump has betrayed all of them.  He hopes that following the orders of the Real Rulers, they won’t kill him.  He has ceased trying to do what Kennedy tried to do and failed: stop the CIA from infiltrating and attacking the US itself.  They now have a green light to continue their control of the US public, with the help of Californians working for Google which is just another CIA operation to collect and abuse data.

END_OF_DOCUMENT_TOKEN_TO_BE_REPLACED

Taliban Attack NATO In Afghanistan All Over Again And Again, Etc.

Thank you, Russian news, for having real news.  We are stuck in Afghanistan.  Bin Laden himself, said he hoped attacks on the US on 9/11 would drive us into re-invading the Afghanistan trap.  Supposedly, US special troops killed bin Laden but they were under orders to hide the body so no one could see that the head was handed over to the Bush/Cheney Skull and Bones people who use it for black magic.  The Skull and Geronimo’s Skull both want the US trapped in Afghanistan because it will bankrupt the US and it is, it is, it is!

END_OF_DOCUMENT_TOKEN_TO_BE_REPLACED 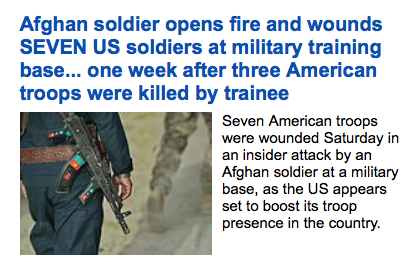 Again and again, the Taliban and ISIS kill soldiers via ‘allies’ who are on the base, gunning down people.  Trump has been told, we MUST stay in Afghanistan and Putin is shaking his head, Trump has been forced very hard to be hard on Putin who has brains unlike our rulers, and so we are stuck in Afghanistan, bleeding away but then, the dead Americans are ‘trash’ the rulers hate, you know, gun using citizens who believe in fighting.  Best kill them in Afghanistan rather than have them at home, fighting here.

END_OF_DOCUMENT_TOKEN_TO_BE_REPLACED

Getting Punched With Lauren Southern At Counter Protest – YouTube:

Hilarious news: ‘We Are Change’ is a hyper-liberal media group who attended this pro-Trump rally in New York City.  The ANTIFA/deranged leftists came to this peaceful demonstration in order to attack people and ended up attacking…anti-Trump reporters working for We Are Change.  Time to change those diapers, dudes!

END_OF_DOCUMENT_TOKEN_TO_BE_REPLACED 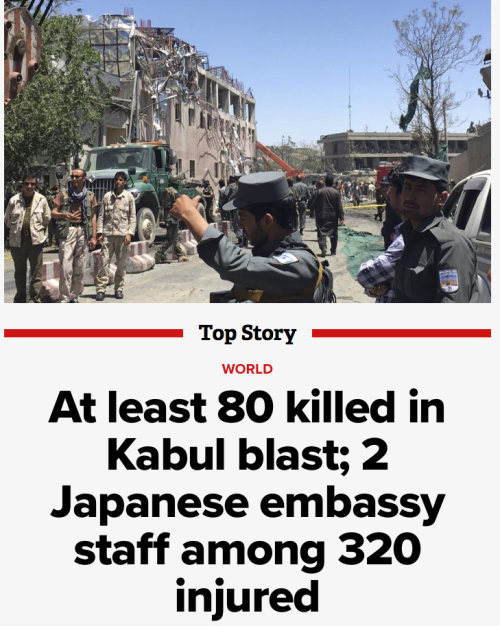 At least 80 killed in Kabul blast; 2 Japanese embassy staff among 320 injured – Japan Today covering the news overseas that is barely on the radar in the US.  Russian news had this as a top top story.  Below, I show were it was on US mainstream big time operations at the NY Times and Washington Post.  It is amazing, what is ‘news’ in the US media giants.  Trash, for the most part. END_OF_DOCUMENT_TOKEN_TO_BE_REPLACED