It is amazing how much is being kept out of the news these days.  Hysterical reports of us all roasting to death make headlines constantly while a landslide in Washington that probably killed over 100 people makes near zero headlines with the Hopes for Washington mudslide survivors fade after more bodies are pulled from debris | Mail Online being the first to speculate that many died there.  It is a strange feeling, seeing so-called news services failing to inform us about life and death issues while whining about computer projections based on erroneous assumptions making headlines and occupying the brains of our oligarch rulers who want desperately to tax our energy consumption.

The horror in Washington has made fewer headlines than tropical storms on the other side of the planet.  If over 100 people died due to a typhoon is headlines, why isn’t Americans dying also important?  Of course, the warnings issued by our rulers about us roasting to death talks mainly about fire and drought and rising oceans.  As I predicted recently, waves of storms are passing over the West Coast causing blinding blizzards and rain which is causing landslides and avalanches.  Here is the 48 hour projection for storms in the US:

Looks like even LA will have rain and the drought so wanted by the global warmists is ending.

The landslide in Washington isn’t a shock, I looked at the geology of the landscape from before the collapse of the mountainside and it is clearly sliding slowly two years before it rushed downwards:

I scanned the surrounding landscape and didn’t spot other sites like this one.  Geologists should have noticed this in the past, it wasn’t hard to spot.  I live on a mountain and I worry about landslides but my place seems geologically secure…so far. 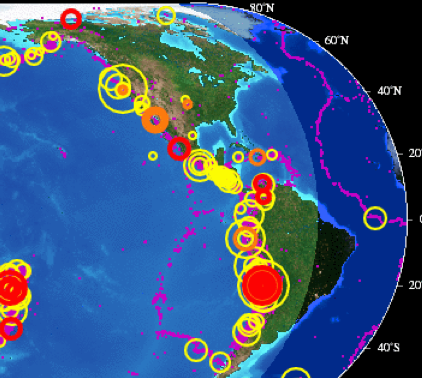 This last two weeks, the entire coastline of North and South America has been extremely geologically active with many earthquakes.  The pressure on the San Andreas where it is locked in California is immense and definitely the jump northwards of much of the west coast in California is impending.  These earthquakes help disturb already unstable mountainous geological features.

That, plus the heavy rain that is now wrecking the ideology of the warmists, is causing mayhem.  Landslides and Engineering Geology of the Seattle, Washington, Area – Google Books

Below is a photo of the steep, concave shaped mountainsides at the bend of the North Fork of the Stillaguamish River where the landslides happened: 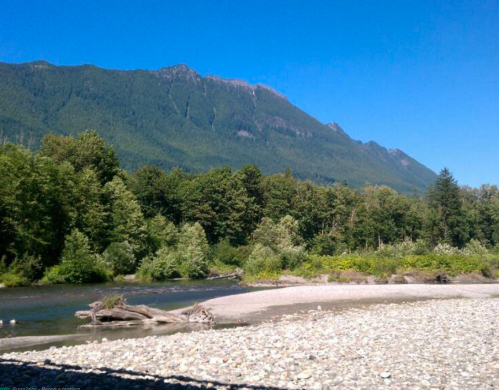 These mountains happen to be exactly where the Great North American glaciers ended, their terminus point on the West Coast.  HistoryLink.org- the Free Online Encyclopedia of Washington State History: Puget Sound which this is part of, was basically created only 15,000 years ago which is yesterday in geological time.

What I find rather scary is the geological explanation at the Washington State History site assumes the Ice Ages have ended forever.  As if we are not in an ‘interglacial’ but rather, the climate we enjoy today is ‘normal’ and thus, is expected to continue forever.