Some people are assuming that Hurricane Irene was no big deal.  Well, it is a HUGE deal here in the mountains of upstate New York, the Berkshire mountains of Massachusetts and Vermont!  My small town of Berlin is now utterly and totally isolated from the rest of the world due to flooding.  And it is still pouring rain as I write this story.  Everything is shut down, the only way out is via horse and my old horse, Sparky, died last year so I can’t get out except if I hike out.  Here are some pictures I took all of which are within 2 miles of my home.  I couldn’t go further even with my jeep.

The above photo is Plank Road.  My own home is on Greenhollow Road which is Plank Road after it crosses Route 22.  So this big flood here in the photo is just on the other side of the main highway here.  The mountain here is very steep even though the photo doesn’t show this adequately.   The pipes strewn all over are quite large.  They used to be the side drainage pipes on the non-stream side of the road which is for normal runoff.  The main stream is way over its steep banks and all of the streams running off of the Rensselaer Plateau are flooding heavily and all of them cross Rt. 22, the main north/south road out of our town.

In places, the road is less than one lane wide, mostly only one shoulder and just an hour ago, it was shut entirely just north of my home.

You can see part of a tree washed onto the road.  A few hours ago, it was totally closed due to the water rushing right over.

This picture was taken on the Little Hoosic side of the road.  This very small river is barely more than a creek but right now, is a raging river and all the flood zone fields are totally under considerable water.  Below is a photo taken on River Road which is on the east side of the Little Hoosic creek.  The stream ran right over the bridge and the families here are quite isolated now.

They can walk across the bridge if they are very careful but driving is dangerous.  Since the stream is running around the bridge as well as over it, the bridge structure is being rapidly undermined.  The more hours this goes on, the more likely the bridge will be wrecked or at least, not passable for cars, until repaired and out here, this can take months.  We have had many floods this last year.  So the bridge building efforts have been exhausting.

Here is another shot of the same bridge with a neighbor calling over to the people stuck on the other side.  Note how the river is running right over the road here, a very bad thing.  Worse is happening upstate.  The news is only filtering in as many places are as isolated as Berlin.  Our fire whistle has been going off repeatedly as people call in for help and our volunteer fire fighters are all over the place, rescuing people and putting up road barriers. 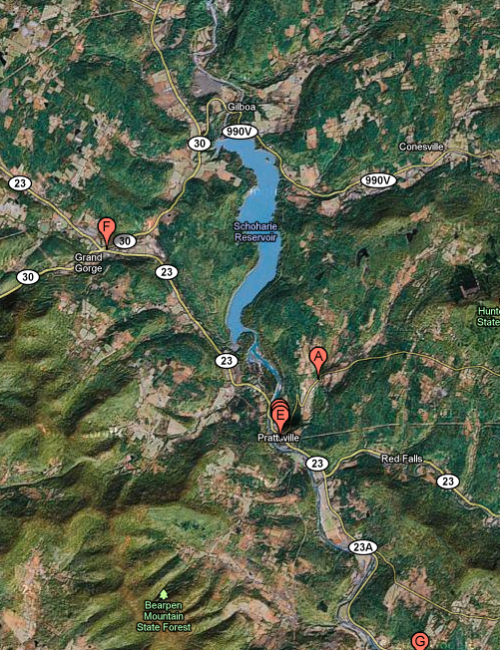 A Greene County Sheriff’s dispatcher said rescue crews were making their way toward Moore’s Motel and Resort in the small town of Prattsville, about 150 miles north of New York City…The dispatcher said crews were unable to get fire trucks into the area because of the flooding but would try to reach the motel using boats…A woman at a nearby emergency shelter said the entire town of Prattsville was flooded but had no further information on the motel or its occupants.

This small town of Prattsville is below a big reservoir that feeds NYC’s huge water appetite.  Many of the towns and valleys north of Manhattan host such dams designed to funnel water to one of the world’s biggest cities.  This dam might fail and if it does, many people downstream could drown.  Even with the dams holding…barely…people are now underwater and need to be rescued.

Those trapped are concerned an already overflowing dam located near the motel will break, MyFoxNy.com reported.  The New York Power Authority Sunday declared a Type B situation at the Gilboa Dam in Montgomery County, New York.

This is very, very serious.  People forget that one of the biggest killers in hurricanes are not the tidal surges and winds on the coast but flooding in nearby mountains.  Hurricane Camille killed probably more people in the mountains of Kentucky, Tennessee and West Virginia than on the Gulf Coast!  Hurricane Mitch, while a mere tropical storm, killed 22,000+people when floods poured out of the mountains of Central America.

We are already seeing mudslides close the Thruway to NYC and knocking down buildings in say, Troy, NY.  Thruway closures in Hudson Valley up to Albany—Southbound lanes of the New York State Thruway are closed for 137 miles from Exit 24 in Albany to Exit 12 at West Nyack.  This seldom happens except in blizzards.  If this were winter, we would be buried in over 6 feet of snow so I am glad it is summer.

.
NYC didn’t get hurt much but Jersey City, a satellite for Wall St, was hit by floods.  Several million people are without power, too.  A major problem, no doubt about it.  We also had, this weekend, a  2.9 Magnitude Earthquake In Upstate New York.  Mother Nature seems to be throwing everything at us this month!  I dare say, when Perry of Texas had his huge stadium meeting of fellow right wing lunatics, they prayed for water.
.
I talked to a Texan relative and he said, Houston has had no water this entire month.  Well, it seems that Perry’s god is teasing him, sending us all the water Texas wants and then some.  Thanks a lot, buddy.  Anyone who thinks a mere god can order Mother Nature around is nuts.  She and her sister goddess, Lady Luck, do exactly as they please.  No one and I do mean no one, tells them what to do or gives them orders.  All we can do is do our best not to be crushed by them when they act up.
.
And if anyone tells me that Hurricane Irene was no big deal can come here and shovel mud for a few weeks, by hand!