ΩΩWe had quite a bit of action in the geological area of reality.  That is, earthquakes and volcanoes are causing some concern.  People are dying.  The Aleutian Island volcanic chain is suddenly active as is a volcano in Sumatra.  Some of these eruptions are injecting volcanic dust in the higher stratosphere and this will alter the climate rather a bit.  Maybe, a lot depending on how many volcanoes erupt and how violent the eruptions are.

ΩΩMeanwhile, the global warming business continues, too.  We are always in a state of relative instability: the scales can tip in any direction rather violently depending on several factors we have no control over: volcanic eruptions, solar outputs and celestial infalling objects.  As per usual, I wish to irritate people by talking about all of these complex things as they happen.

ΩΩNamely, for the last three months I have been insanely busy getting ready for a snowy winter.  Yes, volcanic activity leads to lots of snow in winter here especially if the volcanoes are at the top of the world, that is, Iceland and the Aleutian chain.  And here is the data from the Alaska volcano website:  Alaska Volcano Observatory – Current AVO Reports

ΩΩIf three of these major volcanoes go off simultaneously, this will have a very strong impact on our climate.  These volcanoes are all classic cone shapes and thus, are rapidly reaching the point of collapse, that is, there is this upper limit to the steepness and size of volcanoes before they blow up and become much lower in size.  According to the news, the volcanoes in Russia have temporarily ceased erupting but this is by definition, an unstable situation just like the eruptions in Iceland, it is hard to tell when this is finished or not.

ΩΩThe art of volcanic eruption prediction has greatly improved during much of the last 100 years but still it is much harder to predict than the weather and look at how contentious weather prediction has become!  We hate uncertainty yet the weather seems prone to this by its very nature, being subject to so many diverse forces.

ΩΩMeanwhile, to illustrate all of this, we look at this month’s drought map of the US.  What a shock!  After an entire hurricane season with no hurricanes hitting the Gulf of Mexico’s states (there were virtually  none at all even hitting Mexico) we have a major drought problem in the lower Mississippi valley system and Florida.

ΩΩHere in the Northeast, we had several localized droughts including my own mountain with no rain for a month and it was very hot.  Now, things have reverted back to normal again and this began when all the Atlantic hurricanes began to track up across the Atlantic seaboard.  I do wonder about the near-total cessation of hurricanes forming in the Gulf of Mexico.

ΩΩCould the huge oil slick be part of this riddle?  After all, this calms waters quite literally!  And I would suggest, the normal accretion of moisture heating in the sun and then vaporizing into the atmosphere, thus, feeding cloud formation, was inhibited.

ΩΩSort of like putting a big plastic tarp over 20% of the Gulf’s surface, it doesn’t have to be thick or deep, just spread out very thinly to cause a major climatic change.  I am certain there has been no time for anyone to issue any definitive studies of this business but I expect someone to probably look into the possibility. 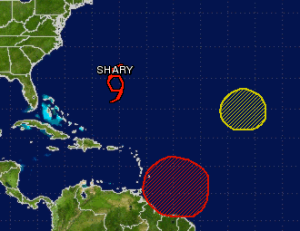 ΩΩWe still see Tropical Storm SHARY type storms forming in the Atlantic only to shoot northwards, raking Bermuda repeatedly as cold waves move across the US.  There has been plenty of hurricane activity in the Atlantic but virtually none of this has touched the US and literally none have touched the deep South.

ΩΩWe can see why when we look at the temperature variation map for the eastern half of the US: the ocean is warmer than normal up in the Canadian/Greenland sector compared to the Gulf which is quite cool.

ΩΩThe ocean off of the eastern seaboard has been cooling off this last month compared to before when it was quite warm.  But at no point did the Gulf waters get hot.  During the 2005 hurricane season which saw the most hurricanes hit the Southeast in the last 100 years, during that year, the satellite temperature maps showed the Gulf as a bright red, not a pale yellow to blue coloration.

ΩΩHere is another shot of the La Nina in the middle of the Pacific: note how the Gulf of California is also quite cold which is probably why so many whales and sharks are moving so close offshore of California and Baja.

ΩΩGenerally speaking, the Atlantic is warm and the eastern Pacific is freezing cold and so we get an odd weather pattern which will only be more destablized in favor of ‘colder weather’ if we get enough volcanic dust from eruptions.

ΩΩThis is the mental trap for the global warming people: warnings work only if it is very hot.  Since, for the most part, it is not very hot in most northern latitudes much of the year, calls for cutting the CO2 gases to save us from too much heat is ignored if we are shivering with the cold or shoveling snow.

ΩΩInstead, a rational and sane assessment of the variability of what is happening and caveats  warning us that cooling is possible will be much more productive.  Not that anyone listens to me.  Psychologically, it would make sense to pursue this course.  Not to mention, it is much more honest.

ΩΩHere is a screenshot from a Japanese car company that is using a polar bear to encourage people to buy electric cars because this will presumably save our planet.  First thing: polar bears are one of less than a dozen predators who will actually, before guns were invented, hunt and eat humans.  They are extremely dangerous to humans.  Turning them and killer whales into cuddly friends is rather funny.  Sort of like how many environmentalists now love wolves, another ruthless hunter of humans in the past before we figured out how to kill them, too.

ΩΩThe electric cars do have one major benefit: they don’t pollute the air in cities.  I am 100% for this.  I hated the auto emissions on the street in NYC and this caused health problems for my children despite efforts on my part to not expose them as much as I could.

ΩΩBut the electricity for these cars often comes from coal burning plants so they won’t save the earth from CO2 problems at all unless they are connected to alternative energy systems.  Power failure: UK’s wind farm plans in disarray – Green Living, Environment – The Independent

ΩΩNIBY continues.  No one wants energy production systems in their own backyards.  They all want to import energy from some other place that gets all the downsides of this activity.  Nuclear power plants are wonderful…when planted far off in some place we don’t live.  Ditto, coal burning plants.  I have pushed for individual solar energy systems being made code in all communities so all new housing automatically has this and we invest in retrofitting old housing with this but for some very bizarre reason outside of Germany, this isn’t happening.  Well, China plans to do this as they up solar panel production and control rare earth markets.

ΩΩThe cap and trade global warming people are increasingly unpopular in their home base in England.  One of the things I warned about was an energy tax that wasn’t directly plugged into installing solar panels on everyone’s roof and then letting people control the energy they use or sell via this, making everyone an active energy producer.  Nope, the super-dopy cap and trade nonsense was applied with a trowel and is now destroying the British economy, as I predicted:  Airline industry attacks Air Passenger Duty – Telegraph

ΩΩSee?  This stupid, stupid, idiotic and silly plan is a TOTAL FAILURE.  Like the floating fiat currency was a total failure, this is easy to predict and understand yet I hear ‘Cap and trade or die’ all the time which infuriates me no end.  It is probably the worst possible solution to this problem, no ifs, ands or buts.

ΩΩThe political fall out from this cap and trade monstrosity is about to slam into England and it is partially responsible for the collapse of Labour and I would suggest, along with the illegal alien problem, it will destroy the Democrats in the US.  Why on earth did they embrace this cap and trade stupidity?  Why?  It makes zero sense except for one thing: the bankers loved this business and wanted it.  The Bilderberg gang decided two years ago at their secret enclave to work in concert to con us into supporting this ‘solution’ knowing full well, its main function is to funnel an energy tax into the pockets of the very rich and very powerful international lenders.

ΩΩLast of all here, note that the money spent to fix the oil problems of the Gulf states was also abused:  Alabama spends BP cash on Mötley Crüe concert .  HAHAHA.  Talk about stupid.  They wanted to have an economy and this means, stupid entertainments that pander to large crowds.  So instead of cleaning up the mess and fixing things so the economic system in the Gulf could work productively, it was used to play around like irresponsible, little children. And this, in a nutshell, is why our economy is collapsing and our ecological fixes are futile.