Wish Upon A Star: Long Ago I Explained Via Funny Cartoons How The Super Rich Are Doomed

I published this very useful explanation in 2009, why we have regular economic collapses and end up with rampant inflation over and over again whenever the Bilderberg gang goes crazy, needing endless sums of ‘money’ to keep themselves happy and contented.  The limit is INFINITY.  They need infinite wealth to sake their appetite for owning everything, everywhere, all the time.  Ask Bill Gates about this!

And here it the story from 13 years ago at Culture of Life News:

Even though many people imagine, they can just walk into the Cave of Wealth and Death and get rich, most can’t do this.  First, there is a lot of naked fear.  Fear of ghosts.  Fear of the dark.  Fear of the gods and goddesses.  Fear of retribution.  Many people talk about going in but few can endure this trial.  Most people stop at the Portal and pray for wealth and power.  They pray for good luck.  But there are some who not only can go into this dark place but actively desire this and indeed, are driven to do this.  I call these people, ‘Gnomes.’

CAVE OF WEALTH AND DEATH —ALL ABOUT GNOMES 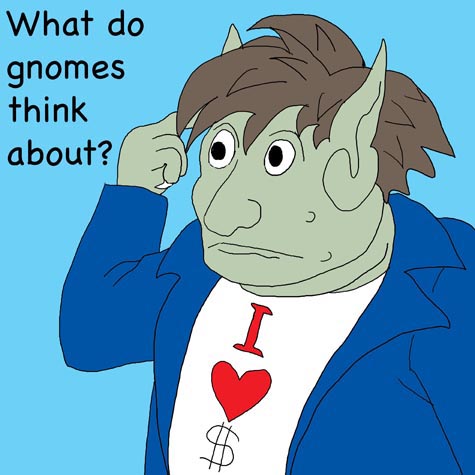 Of course, there are plenty of female gnomes but I mostly cartoon the male ones because they are more fun and frankly, they outnumber the female gnomes 10-1.  Any female wanting great wealth usually tries to get it by taking over some gnome’s wealth and transferring it to herself.  This is because gnomes have this gnawing appetite for sex.  And not just any sex.  They want to have the most beautiful women on earth.  They want human goddesses.  They want the very best, not even, second best.  And they don’t want to use love, this is all about lust.  For the ones who can go into the Cave of Wealth and Death must be consumed by lust.

The beautiful women that the gnomes dream of are possessions.  Only, they are not attractive unless they are also hard to possess.  The best deal for a gnome is for these beauties to lust after the gnome’s money.  This way, he can feel superior to her as she slithers about, trying to appeal to him, both of them knowing, there is no real love at all.  Just desire.  And such desires!

The goal of the female’s passionate object of desire is this golden ring: the wedding ring.  Once she gains this marvelous tool, she has the gnome at her mercy.  Many gnomes struggle to understand how the scales tip in her favor.  They even invented nuptial contracts to get around this business.  But the females are always two steps ahead.  They know how to nullify these contracts.  Conception, divine or devilish, is the ticket.  I suppose, the gnomes must reproduce, somehow.  According to legend, this is how they do it.

Unhappy gnomes go to psychiatrists to figure all this out.  Dr. Freud wrote whole books about how everything is due to sexual frustrations attached to defecation and how money is dirty.  Then, rich gnomes would pay him huge sums for this obvious information.  The gnome cannot imagine his conquests don’t love him. Even though, his traps were always set by generous amounts of money.  To keep his sexual life going, the gnome needs a tremendous amount of money.  This is where they cause huge problems for everyone else around them.

They always feel sorry for themselves, if they have only a few million dollars.  One can get laid with that sort of loot, but it is no fun.  First, the gnome has to be sort of nice to the female he desires.  Second, he goes to the top fashion plate models and they laugh scornfully at him.  So he asks his friends and neighbors and of course, the US government is his favorite sugar momma.  He wants help so he can go into the Cave and get infinite wealth.

When things go wrong, he threatens to kill himself and everyone around himself, if he isn’t bailed out.  This is the Götterdämmerung impulse he tends to have.  All or nothing!  We see this today, as the gnome community alternately begs us for trillions of dollars and when we complain about them using it to buy expensive females or go to expensive resorts, they threaten to destroy the world’s financial systems in retaliation.  This is why we have to control these gnomes or we will suffer terrible plagues.

Back to the Cave of Wealth and Death: the minute the government turns its back on these guys, they rush off to the Cave of Wealth and Death.  We can see here, the path into it is well-worn.  They plunge in bravely since they are looking for the very things the rest of us fear.  Namely, the Goddesses who live in this cave and who are the guardians and creators of all the fabulous riches inside.

Usually, all the rest of the people are scared, when they see the gnomes going into this deadly cave.  But the gnomes always assure everyone, they will not waken the demonic forces inside.  They will not create inflation or cause a depression.  They will be reasonable and careful in the inky darkness of the Cave.  So they even might put on a show for everyone, loudly denouncing raiding the cave and wakening the evil inside, even as they know, in their dark little stoney hearts, this is exactly what they intend to do!

Inside the Cave are entities we talked about earlier: Infinity and Zero.  The goddesses of Infinity and Zero are twin sisters.  Actually, they are one and the same but we humans experience them as a duality, not a singularity.  Note how this Medusa grins as she offers the gnome a huge bag of ‘money.’  She won’t give it to him unless he first releases her innate powers to fly to the ends of the Universe, unstoppable.

Greenspan recently referred to the Federal Reserve as a magical piggy bank.  The goddesses know perfectly well, this is 100% true.  Money is made out of thin air.  They love making money out of thin air.  The thinner the air, the more the money and the happier the dire goddesses are.  They want us to desire infinity and will work hard to tempt the gnomes into doing this.  The whole game for them, is to be released from their bonds placed on them by Libra and to fly out the door and into the heavens. 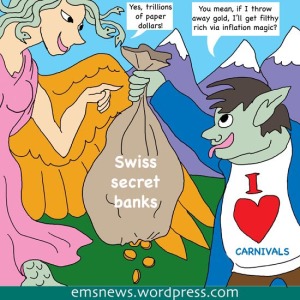 The gnomes normally loved gold above all other things.  But in recent years, they have learned to scorn gold and lust after raw numbers.  For gold has limitations.  It is physical.  It is heavy.  It is hard to get.  But giving themselves magic money is easy.  All they have to do is, add more zeros to a number and it grows at an insane pace.  Since Libra uses gold to limit borrowing money, they threw this away and tried to convince everyone, including themselves, that gold is useless and stupid.  This pleases the Goddess of Inflation, of course.

With endless funny money stuffed in every pocket, the gnomes ran off to expensive bars to pick up chicks.  The female human stand-ins for the goddesses are ecstatic about the chance of picking the pockets of the gnomes.  But the gnomes don’t care.  The super-gnomes often run through 1,000 mistresses, assorted prostitutes and half a dozen wives and still have plenty of loot to toss around.  It isn’t real to them, it is all funny money for their adventures. 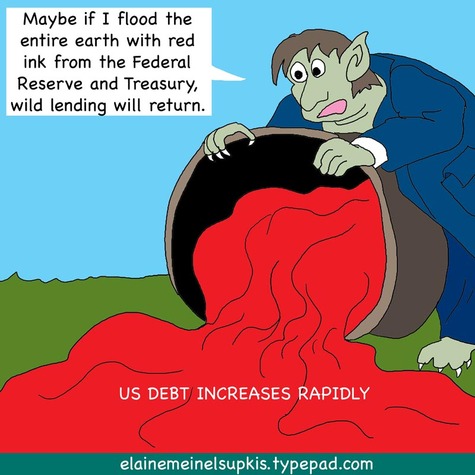 Recently, they had the most expensive adventures in world history.  And now, it is ending.  They are desperate to get borrowing going again since this is the easiest way for them to add many zeros to a number and get trillions of dollars to appear magically so they can swipe a few hundred billion for themselves.  They are now pushing very hard to have all of us lend them immense sums of money so they can lend us money so we can buy stuff with borrowed money since our taxes, to pay for the money we are lending them, forces us to borrow from them to get money back…got it?  Good. 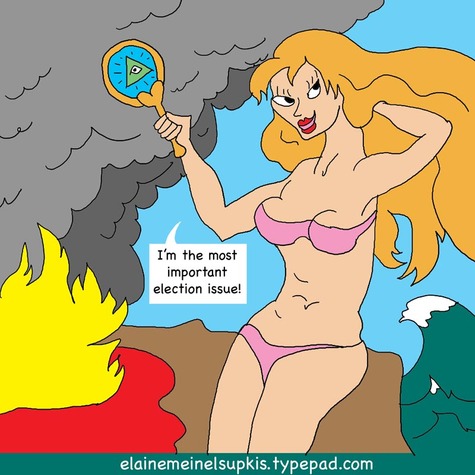 The females need this loot.  They see the world going to hell but are annoyed only if their manicured fingernails get chipped.  The gnomes seldom wonder why these females grow red claws.  They should look closer.  The collapse of all systems is affecting everyone.  One woman, seeking wealth, decided to have 8 babies at once on top of her previous 6 babies.  She was hoping to become a celebrity or go on welfare.  She is what we call, ‘a loser’.  Smart women who are beautiful don’t have babies unless they can nail a multi-billionaire to the wall with an army of well-dressed lawyers.

The gnomes, seeking easy money, released the goddesses of Inflation and Depression at the same time.  The price of important things continues to rise. Gold, for example, has not fallen by over 60%.  Oil shot up, thanks to the gnomes trying to use it, speculating up the price so they could get more money when their buy-out deals collapsed.  We know, grocery prices have gone up and stayed up.  And we sense the winds of inflation are beating very near by.  What we will get is ‘stagflation’ which is when both of the goddesses act in tandem.  Housing and cars lose value while food and fuel rise in price.

Meanwhile, the gnomes are desperate.  They need over $55 trillion dollars.  Since I drew this cartoon, it has risen to over $66 trillion.  This is for the Derivatives Beast.  The goddesses in the Cave of Wealth and Death told the gnomes, if they fed this baby monster, it would protect their ill-gotten wealth.  It would prevent them from ever losing their money.  They fell for it just like they fall for predatory females seeking loot, not love.  They fed the monster until it got bigger than the value of everything on earth. 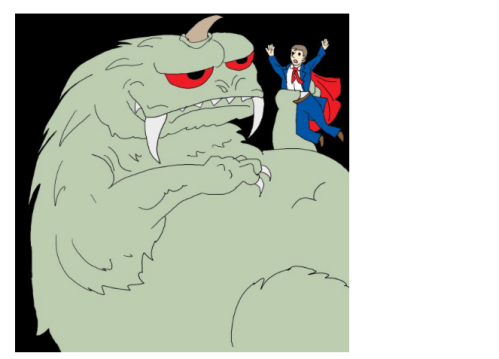 Then, it began to eat them.  It is now eating the wizards.  I have a lot to say about wizards, later.  They are the brains of this group.  They think they understand the Cave of Wealth and Death and can manipulate it to benefit them and the gnomes.  They don’t enjoy wild sex.  They love pure power.  They love to throw spells and control the goddesses.  But they are as miserable failures as the gnomes when it comes to dealing with female forces.

6 responses to “Wish Upon A Star: Long Ago I Explained Via Funny Cartoons How The Super Rich Are Doomed”