Tommy Robinson’s treatment at ‘trial’ and then moved to a very hostile, mostly Muslim prison where he was doused with urine and feces every day by Muslims, they put his cell next to the MOSQUE in the prison!  All things were done to make him suffer to the maximum torture and…this is a human rights violation of the first order!  Prime Minister May and her gang of Bilderberg monsters did this crime and should be arrested and charged with human rights violations.

Britain never had true civil rights, ever.  People pretend Britain has this but my family was forced to flee Britain hundreds of years ago due to political differences (King James II) and we fought literally tooth and nail for true freedoms when over here in the New World.

The US itself has a very spotty record, too including slavery which is the worst of the worst in this record.  But we did slowly build a legal matrix to at least have some quality of freedoms enshrined in the Constitution and its amendments. 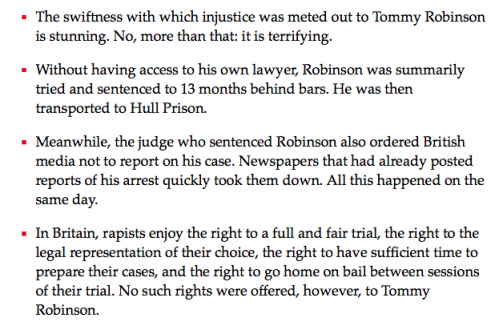 Tommy is now out of prison and his story about his abusive treatment there over a simple CIVIL matter (he didn’t commit a violent crime, etc.) is grounds for the UN to hold hearings about this but they won’t, of course.

Liberals in the US are perfectly fine with him being tortured.  Fake liberals in Britain celebrate tormenting him and physically and psychologically abusing him the exact same way Stalin or Mao have done in the past.

Many recent ‘minority’ immigrants in England want a Hitler style solution to the problem of pesky native Brits some of whom’s families lived in England for the last 10,000 years, to be eliminated brutally.

The left continues its path of destruction, destroying itself.  Lady Gaga pays tribute to Zombie Boy after he ‘kills himself’ in Montreal | Daily Mail Online reports today.

This deranged young man, I wrote about him in the past.  I predicted he would die young and he did, he couldn’t stand himself.  He knew he was a horrible, nasty person and living inside the body of a demonic lunatic is hard work so the only escape he had in the end was to end himself.

This sad, sad case of self-mutilation is rather common, I fear.  The fact that very liberal (sic) people encouraged and celebrated this poor man’s psychosis has greatly angered me.  Instead of helping him, they encouraged his lunacy.

‘If questions persists, the teacher can utilize a question box, review the questions and choose to respond or not the next day,’ the complaint read, adding that if he did decide to answer the students’ questions he had to use ‘scientific/medical terminology only’.

Officials said during the class, Pena ‘discussed sexual topics in a manner inconsistent with training and engaged in inappropriate conduct when teaching’.

He also allegedly told the students that he uses lubricant with his girlfriend, and had experience engaging in unprotected sex.

I bet I know what happened: this ‘teacher’ was in a Hispanic/black school and the kids, raised on TV and other mainstream entertainments, were all very jaded and wanted to egg on their silly teacher demanding he discuss sex with them as if all of them were adults.

When I was very young, kids who did this in class were sent to the Principal and had to have ‘time out’ or even beaten up (yes, hitting kids back in the 1950’s was not only legal but in Arizona, common!) but today, kids get to mouth off at teachers and even physically, openly attack them.

The entire system is a mess in DNC-run cities.  I know that in the DNC voting suburbs that are not heavily ‘integrated’ they still have functional schools but these run on a knife edge.

Sex stuff is on overdrive in our culture.  There are many forces at work now, working to spin things totally out of control.  The sex pedulum has swung too hard to the left and is now heading in the opposite pole.

The DNC efforts to bring in demonically dressed crossdressing males to teach preschool children about sex is the last straw here.  I am still shocked that they did this openly.  The ‘ladies’ were dressed up as devils!  And sat down with little children to read ‘innocent child’s books’ and the parents did this deliberately to their innocent children.  It is beyond disgusting.