Global Weather Gets Colder And Colder, Democratic Voters Think Opposite 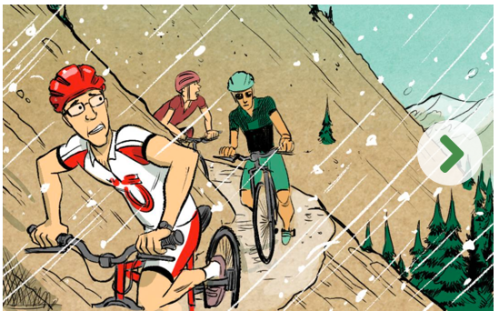 Hail and Hypothermia during warm season in the Rockies at 11,000 Feet | Sierra Club

Sierra Magazineis a typical global warming magazine.  Once upon a time, it was more about nature but in the last decade it has become this schizophrenic operation yelling about how our life styles are killing polar bears in particular.  I got one issue recently and on the back cover is a Subaru car ad, the front page ad is Caravan tour company about ‘Costa Rica Natural Paradise 9 Days for $1095,’ page 56 is Sierra Club Outings for going on trips, on page 14, ‘Escape to Sunny Spain!’ ad (note the ‘flee to hot places tendency here!).   Then there is the survival cartoon in a recent issue, click on the Hypothermia link above to see a bunch of global warmists begging to be picked up by a CO2 spewing truck to save them from freezing to death in a storm during the warm season in Colorado.

Typhoon Nuri to batter Alaska’s Aleutian Islands and will bring super cold to 90% of the US (LA being the only except, and maybe not even that!) which means our government should be paying attention to very cold bitter weather again this year instead of falsely claiming it is ‘the hottest year, ever’ again like this last year which was steaming cold.

Polar bear safaris: Tourists get close-ups with endangered species in open-top truck as the tourism industry tries to make money off of the ‘poor little polar bears, so cute!’ propaganda.  Just like whale watching, it does benefit creatures by making them pay off as tourist destinations.  But how can any global warmist justify this?

They are not only spewing out CO2 like crazy to move tourists in and out, the vehicles they use pour out air pollution toxins due to using diesel fuels.

Our Failing Weather Infrastructure – NYTimes:  Yes, NOAA is messing up with the weather stations and closing many down and there is no need for any of this anyways since computer programs are used to redesign the raw data uniformly cooling down the past and heating up the future to keep the hockey stick game going a while longer.

So what are our scientists planning?  Here is an example:  Could global warming SAVE mankind? Nuclear winter caused by a natural disaster would be reversed by pumping out greenhouse gases, study claims.  Greenhouse gases cannot save us from global cooling caused by volcanoes.  The thing causing problems is dust and chemicals in the upper atmosphere and CO2 will have zero effect on this.

On climate, the Right is right – Global temperature update: the Pause is still 18 years 1 month | Watts Up With That? The above image shows that liberals who are all that is left, aside from black voters, of loyal voters for Democrats, firmly believe we are going to roast to death.  As global warming cools off more and more, there will be fewer and fewer people answering pollsters, saying they are Democrats if Obama and his buddies continue to raise CO2 taxes and shut down power plants in the Northeast and Northern states.

Latest Fraud From The Team | Real Science: Clouds Depress Satellite Warming Trend Says Study that claims they have to raise ground temperatures by 30%!  Yes, one third higher!  To make up for ‘too many clouds’ even in regions where there are no clouds.  This new excuse to cool down the past and heat up the future will be ruthlessly used and then broadcast to the increasingly small Democratic strongholds to convince people they are roasting to death.

Of course, the increasing cold is going to doom that enterprise but not before it kills the Democratic party and dooms progressives forever.

Ice Age Now tracks cold weather events in the world, events nearly totally ignored by our media which seeks out actively to highlight mainly hot weather stories:  Finland – Snowstorm causes massive power outage as the 2nd largest snow cover in Siberia in 47 years shows that cold weather is on the move, not warmer weather, Ski resorts in the Alps could get up to 5 meters (16.4 feet) of snow and this is after story after story about how skiers will have no more snow thanks to global warming.

NOAA polar plunge – So cold its purple as the global warmists who work for NOAA admit it is going to be wickedly cold over much of the US except for mainly California.  NOAA is keeping up their near perfect record for mispredicting the weather:

Every year for the last twenty years, they have uniformly predicted warmer than usual for the Midwest and Northeast.  Invariably.  And are nearly always totally wrong.  How many more decades of utterly clueless forecasts will they be allowed before firing the entire staff?

The twelve month forecast shows a cooler south and always, for the entire year, a warmer upper Great Lakes and Northeast which will be hilarious…not.  I am tired of these false forecasts and any farmer using these will go rapidly bankrupt.  And the entire reason for these is for farmers and people working outdoors and for buying energy stuff like coal or wood or gas to heat or cool businesses and homes.

22 responses to “Global Weather Gets Colder And Colder, Democratic Voters Think Opposite”