I have always been very concerned about the decline and fall of Great Empires and know this is intimately tied to trade.  The UK used to rule the world and look at today:  Poll says Labour still on course for 2015 victory – but UKIP is now Britain’s ‘favourite’ political party: this astonishing rise of a nativist movement is due to the flood of aliens via the new EU rules.  David Cameron has LOST a third of Conservative voters since the last election, shock poll reveals shows that the far right is peeling away from the middle right just like in the US.  The news this week that China is the world’s #1 trade power has slugged the sluggards who created the New World Order in the snout.  They still assure everyone that the UK and US are the world’s #1 banking power but this is due mainly to madly buying up the debts of these two world trade loser nations at a frantic pace to keep the banks solvent.

Most discussions about ‘money’ and ‘power’ leave out trade for some reason.  This is very bizarre to me for both the UK and then the US built their mighty empires due to strong trade policies pursued vigorously.  The Washington Post today has a very silly, infantile editorial about the US not being #1 in the future which has zero understanding how the merchant marine is the fundamental base of any great empire, a thing the US has basically destroyed not to mention ‘Britannia rules the waves’ UK losing its own merchant marine power, too. 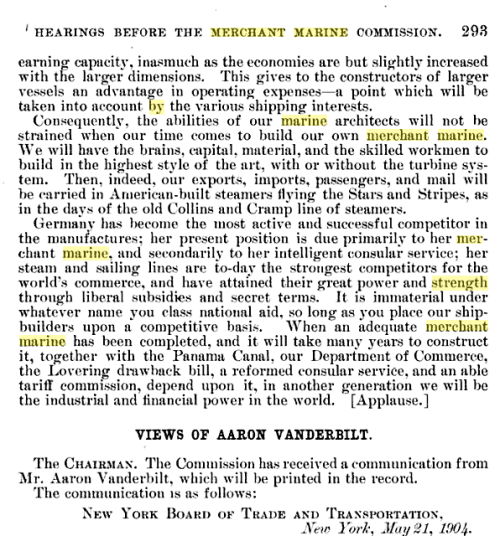 Note how they talk about tariffs!  These were PROTECTIONS and our present rulers tossed this quite out the door, totally, so we have no more protections and viola!  We ended up destroying our own manufacturing and ran up immense trade deficits!  Endlessly.  Even so, today, childish commentators mention how active our trade is…while never mentioning that it runs entirely and hugely in the red all the time and is destroying our sovereign wealth and our political future.  Here is Mr. Vanderbilt’s complaints about the condition or our own merchant fleet before WWI: 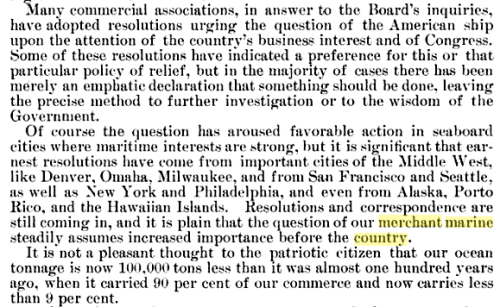 Vanderbilt even complains, aside from Germany’s domination, that Japan’s merchant marine is bigger than the US, too!  The US lost NINETY PERCENT of its shipping trade!  The fleet shrank by 100,000 tons compared to the Napoleonic Wars era.  This is amazing.  Now, on to the silly editorial at the Post, written by Mr. Charles Kenny of the ‘Center for Global Development’ which is a leftist operation on behalf of Bilderberg goals:

America is No. 2! And that’s great news. – The Washington Post

For starters, there are a lot more people sharing China’s GDP; even the rosiest forecasts for the country’s economic growth suggest that per capita income will be lower than in the United States for decades to come. The average American lives five years longer than the average person in China, and civil and political rights in the world’s soon-to-be-biggest economy are routinely abused. Living in an America that ranks second in GDP to China will still be far, far better than living in China.

There are some real economic costs related to losing the top spot in the GDP rankings, but they are small and manageable. The dollar might lose its dominance as the currency of choice for central bank reserves and trading, and some predict that will increase the cost of U.S. borrowing and exporting. In fact, the dollar share of global reserves has already fallen from about 80 percent in the 1970s to about 40 percent today, with the euro and the renminbi gaining ground, but there isn’t much sign that that has spooked global markets. Meanwhile, businesses in the rest of the world still manage to export, even though they must go through the trouble of exchanging currencies.

And growth in the developing world, even if it means that some populous economies may eventually grow larger than the United States, also means that there are more places for Americans to travel in security and comfort, and more places to learn, work or while away our retirement years. Americans can get health care at Bumrungrad International Hospital in Bangkok — accredited by the Joint Commission International, which certifies health-care organizations worldwide — for a fraction of the cost they can in Bethesda. Or their kids can attend college at the University of Cape Town, rated higher than Georgetown University in international rankings but one-fifth as expensive. Or perhaps they can get jobs at one of the new breed of world-class multinational firms based in the developing world, such as Tata or Huawei.

So, we get to flee the US and move to Bangkok?  HAHAHA.  Send your kid to a cheaper university in Africa?  The Brits did this: flee.  They retired all over the place only to discover the downside of all this, that is, the natives hate you and seek opportunity to loot the foreign devils.  Duh.  The US dollar was the global reserve in 1970 due entirely and only to the fact that it was the Gold Standard.  Nothing else.

Today, it is held only for trade purposes in FOREX accounts designed to be money sinks to keep trade deals positive for rivals who want a fake weak currency with the US and UK while running up immense trade surpluses.  This isn’t a sign the US is ‘strong’ it is a sign the US is STUPID.

Once upon a time, we were not so dumb.  Here is another example of our Congress, not owned by foreign powers, thrashing out how to grow trade:  To Amend Merchant Marine Act of 1920: Joint Hearings Before the Committee on … – United States. Congress – Google Books

That is, the core of any strong military navy is a strong merchant marine!  DUH!  During WWII, our massive merchant marine carried the day bringing goods and war materials all over the planet earth and our factories churned out goods at a mad rate which they no longer can do.  The childish desire to poke China in the eye while China controls so much of the electronics markets and produces so much steel and other war goods is pure insanity.

If we look at today’s Live Ships Map – AIS – Vessel Traffic and Positions – AIS Marine Traffic we can see that much of the container ship activity is around China and much of that is Chinese-owned.  China went from virtually no merchant marine in 1980 to the world’s biggest nationalist fleet.  The fake fleets of the tiny island nations don’t count.  The fact is, when Madame Mao was arrested, the Chinese learned from my father that my husband worked in international shipping so they sent some cadres to learn about world trade from us and I basically ran a school about ‘how to be a world trade power’ and they lapped it all up and took the lessons very much to heart and so…today they win and we lose and I warned the State Department about all this and was ignored by the senile Reagan staff.

China is #2 after a tiny Caribbean island.  Liberia has many ships, too, none of which deal with native trade, it is all foreign scamsters.  The US is #14 and dropping.  Even the feeble UK is ahead of the gigantic US.  Japan has barely one third the number of ships China has.  The US and Japan together have one half the ships China has.

The goading of China by Japan is suicidal because the US and Japan cannot sustain either state if there is naval warfare if Russia joins China and forces Europe to tend to itself.  That is, be nice.  Russia holds the energy whip in Europe. Yesterday, the Chinese unveiled this Memorial for Korean who fought Japanese colonization  in Manchuria where a Korean assassinated a Japanese prime minister before WWI.  This is definitely a message to Abe and his buddies in DC.

One last thing, over and over again including in the WP ‘We are #2, hooray!’ editorial, India is mentioned as a counterbalance to China.  Here is a photo taken today showing ship action in India from the world shipping data site:

This isn’t even all of China!  India has a huge coastline yet has only one tenth the shipping China has.  If you go to the webpage and click the mouse on the ships, you can read their names and nearly every ship I clicked on next to China, flew the Communist flag.  Here is Japan:

Northern Japan is nearly empty after Fukushima, the west coast is completely devoid of shipping, much of this now comes and goes from Tokyo and the inland sea ports like Hiroshima and Nagasaki.  And is only slightly more ships than going in and out of India.  There is no way Japan can hold its status with this feeble an effort.  Much of Japan’s shipping used to go to China but thanks to Abe, this is in decline.  So Japan clings to the US for trade power.  Sinking both countries.